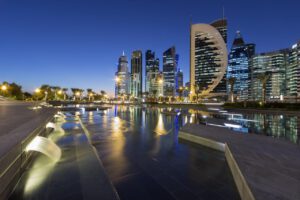 It is indeed unfortunate to witness yet again another year passing by without any consequences imposed on the corrupted authorities in the State of Qatar.

The State Of Qatar

Qatar citizens have always strived to maintain good relations with their neighbouring states and all other countries around the globe, they have always persisted in attaining friendly relations with all nationalities and have treated anyone who lived amongst them with respect.

But Qatar citizens had to witness an era where a son overthrew his own father to grasp power and control over the State, to please the egoistic & self-obsessive Sheikha Mozah Bint Nasser Al Missned, who for decade had made a plan to destroy the Middle East and Gulf region, a trade she had made with terror groups across the world, in return to enforce her position in the State of Qatar.

Her neurotic obsession for power extended to further imposed injustice against million of migrant workers who have been unfortunate to have landed in her court, whereby she has been enslaving them for decades to build herself the empire, at cost of these helpless beings and by exploiting the state’s wealth and resources.

Many people may have been pleased with her willingness to build a nation, but the truth is beyond that in its entirety, whereas all these lavish buildings and projects that have been built in the country are nothing more than just a façade and a ruse to extract billions from the country. For every project that was unveiled in the state, 500% value of that project ended up in her personal account and asset transfer worldwide, rendering the State of Qatar nothing more than just a bank that she is encashing from.

In the last two decades at least, the world has witnessed several human rights violations, from children being engulfed in a fire and their parents unable to attain justice just because they were unfortunate to have been perished in a mall that is owned by one of Sheikha Mozah’s sons, or the helpless women who landed in transit at the airport in Qatar and were forcibly and intrusively searched without their consents, or when journalists have been detained, or when migrant workers are killed by the thousands and many other human rights violations.

Which brings us to the point of our letter today to “Reporters Without Borders”, do you believe that Qatar’s authorities deserve to have attained a push up nine places through your global press freedom index, although it is not considerable given the fact they are still in the lower freedom index margin, nevertheless, these corrupted authorities do not deserve even the slightest recognition to be mentioned in any index around the world, the only fair index they are eligible for is the Terror Index, where they will strike the highest index rating.

We assure you that the corrupted authorities in control over the state of Qatar have not improved in any standard or level acceptable, rather they have degraded human right and dignity and exploited them for their own gain.

That is why we bring forth to you the following events that can be witnessed by all, whereby you will personally witness how the local courts are preventing citizens and residents to defend their rights, preventing their lawyers to represent them and coercing judges to pass on unlawful judgements#

The below list are the ongoing court sessions held in local courts in Qatar and reporters can document these sessions to record the human rights violations that are being imposed in Qatar.

In the event any international reporters or journalist are unable to attend these sessions, we are able to provide a LIVE FEED of all these sessions upon demand by sending your requests to our email

Furthermore, we can provide further evidence on the ongoing human rights violations in Qatar against migrant workers and how they are being treated, where they are accommodated and direct complaints from these migrant workers who are unable to contact the outside world to voice their concerns and agony.