This morning we are up.

There's no news or no reason but we're bouncing a bit this morning after being down 1.2% on the S&P 500 last week.  CPI is our big data point for the week and we have to wait until Friday and it's a quiet week for the Fed – so data is pretty much all we have with earnings winding down – and there's not much of that either.

CPI was up 8.3% year/year as of April and is expected to calm down to 8.2% in May but I'm not so sure as oil and gasoline looked like this in May vs April: That's higher, right?  Now, I'm no "Leading Economist" but when Oil and Gasoline are 5-10% higher during the month – it's a little hard to imagine how general prices came down but maybe I'm too dumb to understand the nuances of economics? Did labor costs go down?  Not according to the Productivity Report we just got.  The Dollar was stronger, so perhaps it offset some of the price hikes in basic commodities but those are priced in Dollars so I don't think so.  That means we should be prepared for an upside surprise on Friday and honestly, it's the only significant data we're going to get this week:

As I said, earnings are still trickling in but also not much of an effect: 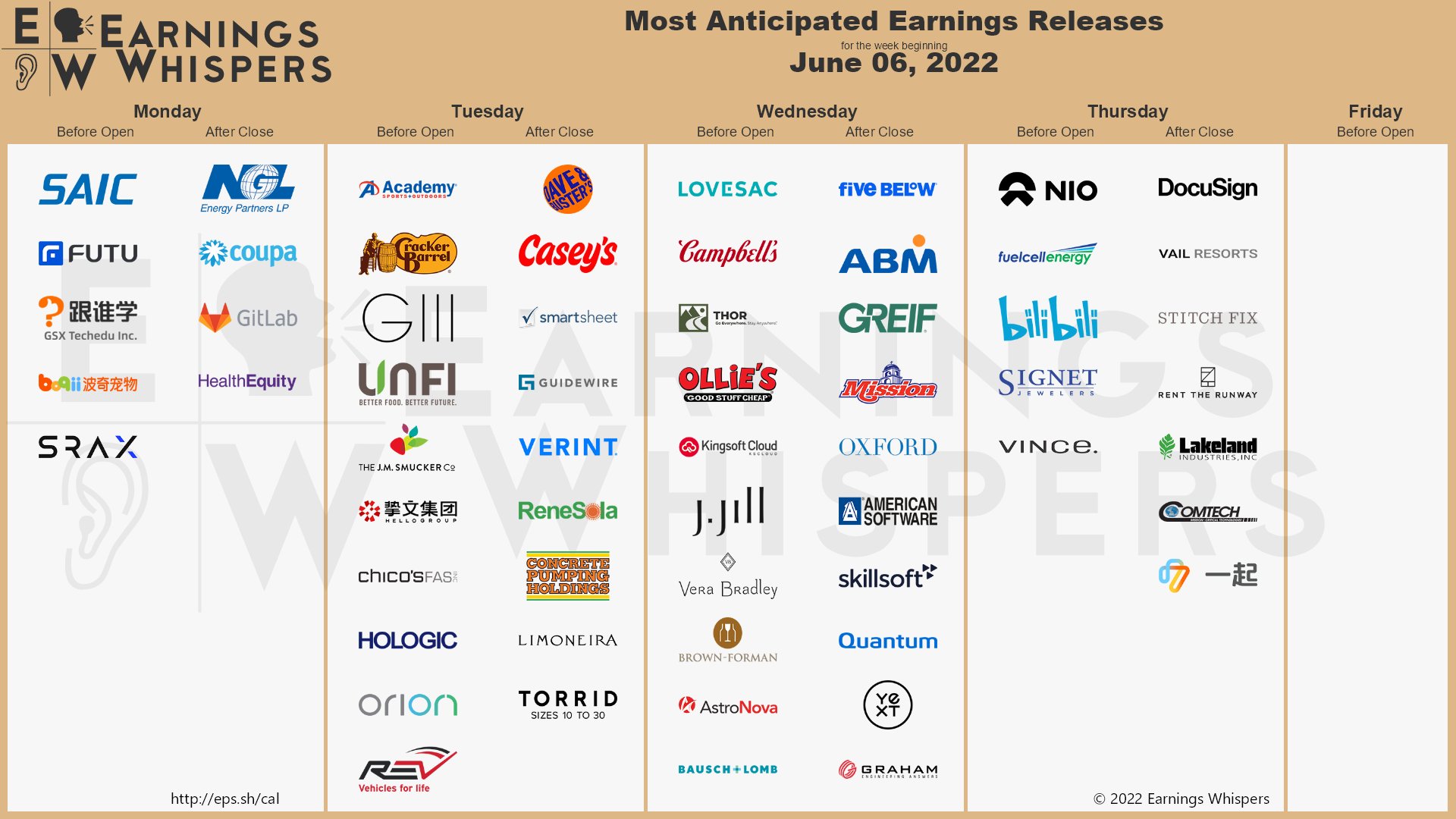 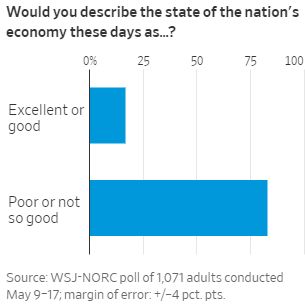 What most concerns me this week is a Wall Street Journal poll that shows 83% of respondents describing the state of the economy as "poor" or "not so good."  This is something I have been pointing out for months and it's getting worse.  We, in the investing class, are generally in the Top 10% and, on a daily basis, most of the people we interact with are in the Top 20% so it's easy for us to have a distorted view of the economy.

The Government handed out around $15,000 to families of 4 in the past two years and there sure wasn't anywhere to go so people were doing OK but now that that's over, we are left with inflation and no more stimulus checks – and people are feeling the pinch very harshly. 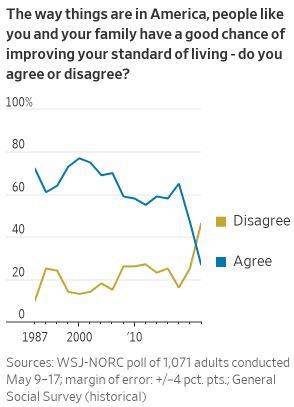 So 83% of the people believe the economy is bad and 46% don't see how they can improve their standard of living – that's DEPRESSING and depressed consumers are what leads to a DEPRESSION – which is where the name comes from.  The share of respondents who said their financial situation had gotten worse in the past few years was 38%. That marked the only time other than in the aftermath of the 2007-09 recession that more than three in 10 respondents said their pocketbooks were worse off, according to GSS data going back a half-century.

Households are digging into savings to support their spending, the Commerce Department and we'll keep a close eye on tomorrow's Consumer Credit Report to see how things are going there.  As you can see from the chart on the left, since 2014, the number of people who feel they can no longer improve their standard of living has pretty much tripled – to now 45% of our entire society or, as noted by George Carlin:

We have tricky times ahead if we're going to ride this out.  We improved our TZA hedges in the Short-Term Portfolio (STP) on Friday morning but then we also added long positions on FB, TGT and NFLX in our Long-Term Portfolio on Thursday as some stocks are cheap enough to buy – Depression or no.  Speaking of cheap, Biden is finally lifting that tarriff nonsense on solar companies so Sunpower (SPWR), which is one of our largest holdings – should finally be about to have a nice week:

In our Long-Term Portfolio, we have this very aggressive position:

We caught a nice low in January and rolled our 50 long 2024 $15s to 100 2024 $10s and, overall, we're still down on our SPWR plays but we feel they are very undervalued in what is bound to be a solar-driven change to renewable energy over the next 20 years and SPWR is our Stock of the Decade and we're very excited to have it in all of our Member Portfolios.

Amazon (AMZN) will be interesting this week as they are splitting the stock 20:1 – so there should be plenty of people jumping in but AMZM is the same $1.25Tn company making $25Bn (only $8Bn this year) that they were last week so it's not "cheaper" just because they split the stock – it's still trading at the exact same 50 times FORWARD earnings that they were trading at last week and that's still too much to pay in this evironoment – don't get sucked in!

It's going to be a crazy week – we still need to take back those bounce levels, so we'll see how things go.