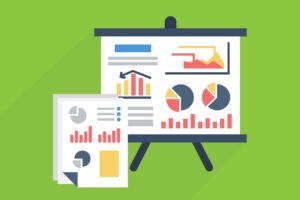 It’s been a rough six months for tech stocks…

Some of these names have sold off so hard they’re now among the cheapest stocks on the market.

And that’s presenting a HUGE buying opportunity for you and me.

More on that in a moment…

Buffett became the world’s wealthiest investor by hunting for bargains in the stock market.

He buys businesses trading for less than what he believes they’re really worth. Then he often holds them for decades… watching cashflow grow and the stock price appreciate.

This is classic value investing.

However, value investing has been the laughingstock of the investing world over the past decade.

You can split the stock market in two.

On one side you have “value” stocks—cheap, undervalued companies.

“Growth” stocks are the other half of this equation. Think fast-growing tech companies that are usually expensive based on earnings. Often, they don’t have earnings at all.

You can see growth stocks (green line) have pummeled value stocks over the past decade: 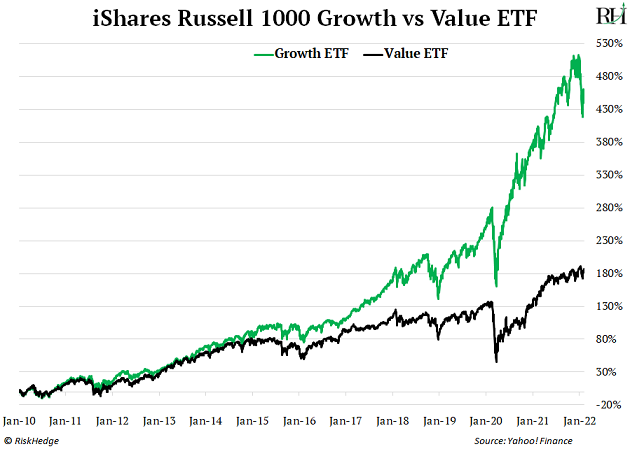 But zoom in on this year…

According to Wall Street Journal, value stocks are beating growth stocks by the most since 2000.

One of my favorite “screens” is the best-performing stocks, year-to-date. While these recent winners aren’t necessarily good investments… it’s useful to know which stocks are hot and which ones are aren’t.

I ran the screen recently… and value stocks are dominating the list.

Specifically, companies that produce oil are some of the cheapest stocks on the market. The 40 best-performing stocks since January include: 38 oil and gas producers, a lithium miner, and a company making fertilizer.

Why are we seeing a huge shift away from tech stocks, toward “old economy” companies?

Inflation recently hit 40-year highs. Everywhere you look, prices are shooting up. Our hard-earned dollars don’t go as far as they did five years ago.

Without getting too into the weeds, cheap value stocks typically perform better during periods of rising prices. 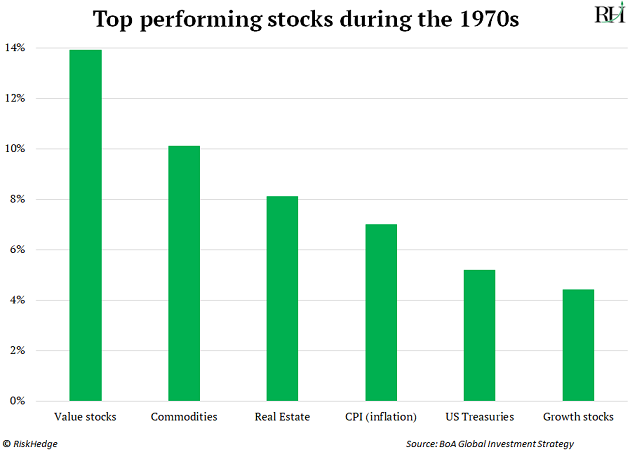 After a decade out in the cold, value stocks are back on top.

Every value index and fund are jammed with oil producers, banks, insurance companies, and consumer staples stocks like Walmart.

But a real value investor wouldn’t touch these names today…

Remember, Amazon, Google, and Facebook are down 39%, 26%, and 50%. These stocks are usually lumped into the “growth” bucket.

But these fast-growing tech stocks are now cheaper than many value-investing darlings.

Facebook and Google are selling for their lowest valuations in history. As of last week, when measured by free cash flow, they’re now trading at a lower valuation than Coca-Cola, a 120-year-old soda maker that barely grows.

Same goes for ASML Holding NV (NASDAQ:ASML) too. Longtime readers know ASML is the world’s most-important company. It’s the only company on the planet that makes the machine capable of producing the world’s fastest computer chips.

Not only are these fast-growing businesses trading near their lowest valuations ever… they’re now cheaper than century-old companies that barely grow!

Some of these names have gotten so cheap we’ll likely see them move from a growth index to a value index later this month.

You don’t get an opportunity like this often. It’s only happened a few times in history, and it’s usually a great time to put money to work.

Don’t get me wrong… not all tech stocks are cheap. There was a lot of froth in the market that needed to be washed out. In November, Rivian Automotive Inc (NASDAQ:RIVN), an electric truck maker with only $1 million in sales, was valued at $150 billion. That’s crazy.

But that was then. Now, we’ve swung from one extreme to the other. Many of the world’s best businesses got clobbered and are now cheaper than they’ve ever been.

Armed with this knowledge, ask yourself: Is this the time to buy or sell?

History shows us it pays to buy great businesses when they’re cheap. We have one of those opportunities again today.