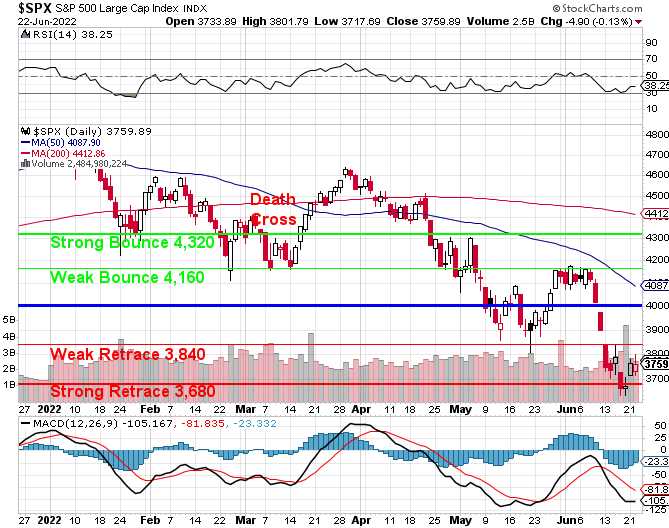 We had a very nice Macro Discussion on our Live Trading Webinar Yesterday.

The bottom line is the "Recession" is a lagging measurement of the damage that's already been done by War, Supply Chain Disruption, Covid, Inflation, Global Warming and the Labor Shortage – it's like getting the bill after you've eaten the food – the bill doesn't make things worse – it just sums up the damages.

That's the problem with Stimulus Spending – the Government spent $11Tn in the past two years and we have/had a $22Tn economy so 25% of it has been stimulus and now there is no more stimulus (after Biden's last $2Tn) so we have to stand on our own and, if you think a $17Tn economy (without stimulus) bounces back to a $22Tn economy in one year – you just don't understand how economies work.  So, that means we'll be at LESS than $22Tn without stimulus and that means, on paper, the economy will contract.

The thing is, it already contracted 25% during Covid but we pretended it didn't and we papered over the gaping economic hole with Trillions of Dollars and now we are finally paying the proverbial piper but there's no sense in whining about it or panicking over it – this is simply an honest measturement of our economy for a change and labeling it a "Recession" doesn't make it worse.  That's like saying you can say the temperature is 32 degrees but don't say "freezing" – because that would make it cold… So stop whining and find things to buy but buy with caution and scale into the positions (see our Strategy Section) because, as we learned in 2008/9 – there's no limit to how panicked traders can get.  The entire banking sector was trading below 5x earnings, many Blue-Chip companies were priced like they were going bankrupt.  Did the whole thing turn around in a month?  No, but by September of 2009, we were happily counting our winnings! (see: "Stock Market Crash – Year One Review III – March Madness!")

LEN beat this week, as did LZB, WGO, KBH, DRI and RAD this morning, which makes me happy about our HOV and THO positions and RAD reminds me to look at WBA, who are back to $40.  We have WBA in our Money Talk Portfolio but we can only adjust it when we are on the show.  That position looks like this:

WBA is selling Boots so probably changing their name and Wall Street never liked the combination but I did.  Perhaps with the cash people will want in again and $40.50 is just $35Bn in market cap and these guys drop a very steady $4-5Bn a year to the bottom line so p/e around 8 and net debt will be under $4Bn (one year's earnings) once the sale of Boots goes through.

For our Long-Term Portfolio, as a new position, I want to add the following:

Powell testifies to the House today but, after that, things should calm down.  Next week is pre-July 4th so it should be a very low-volume week.  As long as we finish this week over that 3,840, then we have a shot at S&P 4,000 into the holiday.

Subscribe
Login
Please login to comment
139 Comments
Inline Feedbacks
View all comments
News:
A wave of unrest is coming. Here’s how to avert some of it
By: The Economist
News:
Ohio State University Trademarks ‘The’
By: Daniel Victor
News:
Republican Senators Break Filibuster On Gun Control Bill—Final Passage All But Certain
By: Nicholas Reimann
phil
Author

Now that Powell has shut up, the rally has resumed.

Still, too early to call – lots of twists and turns these days.

Looks like they are just going to not do the EIA this week.  It makes no sense.  The report itself is compiled from data they collected over the weekend so what could have possibly happened THIS MORNING that was so catastrophic that they can't recover from it.  Its not like it's the census – it's counts from refiners – they could just do the counts and put it on a spreadsheet (which certainly should have been done already).

with oil down 12  bucks in the past week and oil stocks down big the oil report must have contained the reason. maybe insiders needed more time to cash out.