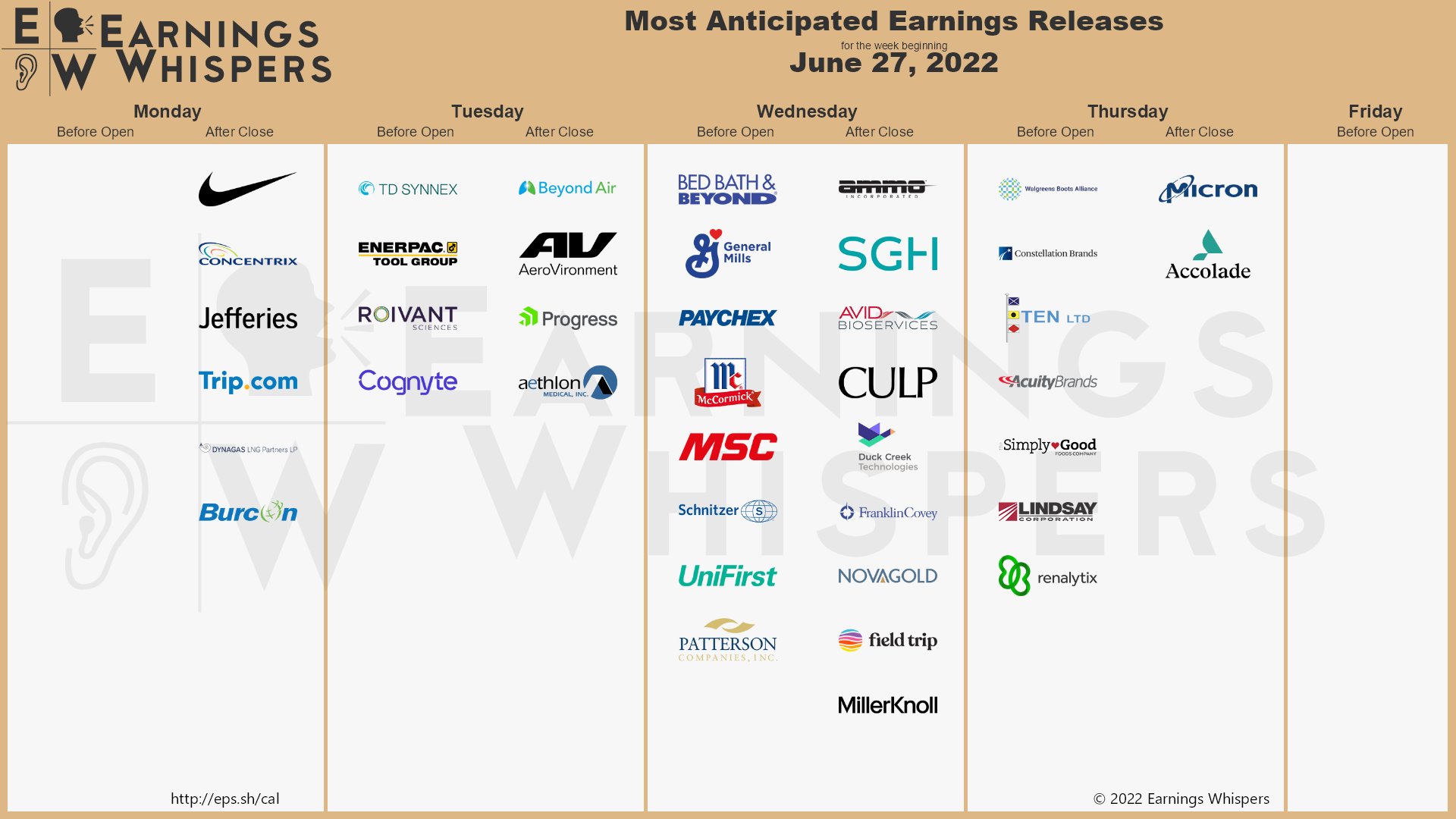 Pre-holiday weeks are usually low-volume affairs and the market tends to drift higher.  There's not much in the way of earnings that are likely to derail us at the moment though Nike (NKE) this evening is a big one that could be problematic if it doesn't go well.  NKE was an upside surprise last quarter so it would be a huge disappointment if they miss now.  The stock has dropped 20% with the market since then – so it won't take much to get them to pop.

Of course, China went back on lockdown so they could have had additional supply-chain issues and lower sales in China and Consumer Spending in the US also pulled back recently – so it depends how things were going through the end of May, which is what this report will capture.

NKE is the kind of stock we like to buy at PSW when they are cheap but $113 is not cheap as it's $178Bn in market cap and, even if all goes great, NKE is only going to make $6Bn this year – about 5% more than they made last year.  That means they are trading at close to 30x current earnings and it means only that $180 was RIDICULOUS and $113 is simply getting better – but still not a price we'd pay for a retail manufacturer.

That's the dark side of upcoming earnings – there's still a lot of companies out there trading at unrealistic prices.  I can get the same return on a 10-year note (3.4%) as I can on NKE stock.  Speaking of notes, Russia is finally about to default on theirs – although they don't see it that way.  They were expected to pay $100M by last night and they did not – which is the usual definition of default – 30 days after their May 27th deadline.  Russia claims to have made payments in Rubles but Rubles are not acceptable under the contracts but it's up to the investors (private) to declare Russia in default (and hire food testers from now on) – so we'll see what happens.

On the Economic Calendar, Powell is scheduled to speak after Wednesday's GDP Report and that's spin, not coincidence, which means the GDP Report is likely to disappoint and, since it's only a 3rd estimate of Q1 – it seems like it's going to be WORSE than the -1.5% it showed last time.

As you can see, the Atlanta Fed has lowered their Q2 forecast by 2% over the past 60 days and if that data has been sucking then it's very possible the Q1 data has deteriorated as well and what would 2 consecutive quarters (that have now already happened) with NEGATIVE GDP growth be called?  That's right, RECESSION!!!

So Powell is going to have to put a good spin on that to keep the dream of S&P 4,000 alive and the other economic hurdles we have to jump this week are Durable Goods, Pending Home Sales and the Dallas Fed today, Retail Inventories, Consumer Confidence, the Richmond Fed and more Housing Data tomorrow, GDP comes with Investor Confidence & Business Confidence on Wednesday, Thursday we have Personal Income and the Chicago PMI and Friday we finish with Manufacturing PMI, ISM, and Construction Spending – so it doesn't look good for breaking over 4,000 – we'll just be thrilled to get there.

Of course, as we discussed last week, Recession is just a label we put on data that has already happened – it's not a NEW sign of things to come.  BUT, just because we understand that, doesn't mean our fellow investors do – so we can expect yet another market panic once they capitulate and admit we've been having a Recession.

8:30 Update:  No Recession this morning as Durable Goods are up 0.7% for May, which is our best reading since January as Feb was down 0.7%, March 0.6% and April 0.4% so nothing GREAT about 0.7% other than it's not worse and 0.3% was expected by our Leading Economorons though I can't blame them for that one as we didn't have a lot of positive data to indicated Durables were turning around.

After Friday's huge rally, anything that's not down will be good today.  Oil, unfortunately, is heading back to $110 for the holiday weekend and trading is likely to be very thin and inconsequential this week. Still drifting along but above the 2.5% lines (from Friday) is still consolidating for a move up:

These are weeks, so we have to remember to be PATIENT!

Short-term MACD is turning up so if the weekly turns up as well – big technical push and not much resistance should keep things moving a bit higher as long as there's no terrible news.

This is an interesting concept in the STP:

We know we are going to get more bearish but how?

We have 1,000 longs and 1,450 shorts and my premise has been we're not going to $70, so the extra shorts don't matter.  It's really all about the 350 bonus Jan $70 calls, which also have the benefit of expiring in 6 months and buying them back (making us more bearish) would cost $380,000 which, though "sensible" – seems very wasteful to me as I feel strongly they will expire worthless.

HOWEVER, if we were to take 400 of our 2024 $60 calls and spend $320,000 to roll them down to the $30 calls – that widens our spread by $1.2M before we'd have to pay the short $70 callers a penny so I have to believe that between that and the Jan expiration of the extra 350 calls – that that's a far better use of our money than just buying them back our of fear.  We do have $1.4M in CASH!!! and raising that cash is why we're imbalanced in the first place so this is a sensible way to adjust if we sense any weakness.

"The primary catalyst appears to have been a steep decline in Fed tightening expectations into rising recession risks," Wolfe Research said in a note Monday. "However, the market also traded up on Friday following St. Louis Fed President Bullard’s positive comments about the U.S. economic outlook."

"The market going up on opposing messages gives us increased conviction that last week’s rip was technically driven and it is very unlikely to be sustained," they said.

"While the rally may have some near-term follow through, our intermediate-term bearish base case remains intact," Wolfe added.

To turn bullish, Wolfe is looking for eight factors to occur, "the most important of which are 'compelling' evidence that inflation is heading lower, and the Fed signaling that the tightening cycle will be winding down."

"While we probably won’t need to see all of the items on this list head in right direction to turn bullish, none are currently trending positively."

Morgan Stanley says stocks can rise another 5-7% in this bear market rally.

Hey, just what we were talking about earlier: