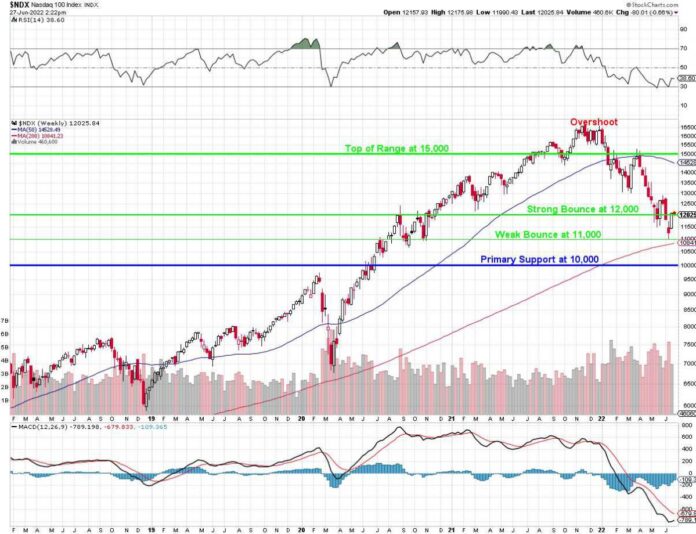 We’re not there yet.

Our expectations, as we decided yesterday in our Live Member Chat Room are for a move back to 13,000 on the Nasdaq, where we’re likely to flip bearish again and we expect 12,000 to settle down to become the middle of the NDX range – likely for the rest of the year.

Nike (NKE) was no help last night with weak guidance but earnings were actually a beat from low expectations.  China lifted some of their lockdown restrictions again and that’s boosting everyone pre-market and remember – a 1% move on the Dow these days is over 300 points – so there’s nothing at all impressive about 100-point moves.  Oveall, this is more of a “watch and wait” kind of week – we made our bullish bets last week and, for the moment, we’re taking a breath to see how they pan out before jumping into more stocks.

Hamburgers are going to be 36% more expensive this Holiday Weekend and that’s the data we’re going to have to contend with when we get back as inflation continues to creep into every corner of Consumers’ lives.  Going shopping for a BBQ party and getting a $300 bill at the grocery store vs $200 last year is the kind of thing that sticks in people’s minds the next time they are surveyed about their sentiment regarding the economy and their own finances.

And it goes round and round as, for example, UAL just agreed to give pilots a 14.5% wage increase, which means the price of your plane tickets will go up to pay for it.  This is why it takes so long for inflation to settle down – there are layers upon layers of increases which feed on each other.

Oil is blasting back to $112 after President Macron was overheard telling President Biden at the G7 that the Saudis simply cannot increase their production more than a little over the next 6 months – that put the bulls right back to work – jamming up prices into the holiday in order to maximize your pain at the pump.  They never did release last week’s Petroleum Status Report so it’s tough to get a handle on our energy situation.  Hopefully tomorrow they’ll have an update – like they are supposed to. 8:30 Update:  Surging Dollar strength is taking down the indexes in early action but the effects of Dollar moves are generally short-lived on an intra-day basis so we’ll just have to wait and see what’s going to stick.

Housing Prices continue to be very hot, with April up 1.6% and we’re up 18.8% since last year.  Case-Shiller shows a 21% increase year/year into May.  That’s causing the odds of aggressive Fed hiking to climb and pushing the Dollar higher.  At the same time, Fed’s John Williams is saying he sees rates at 3.5-4% into next year adding: “We need to raise interest rates quite high this year and into next year to combat inflation…  To me what matters is the path of the policy. I think 75 bps last meeting was absolutely right.” For the the next meeting 50 or 75 bp may be appropriate.”

That’s caused a brief pullback in the market but it’s still in-line with what has already been said so an over-reaction, I think.

Speaking of rolling – we'll have to execute the SQQQ roll in the STP we discussed in yesterday's chat – it will make me feel much better:

That gives us $1.2M more inside before we get in trouble with the short calls and we still have $1.1M left to spend.

Huge disappointment today – super weak – and not even any volume.

Gotta keep things in perspective as Friday was such a pop but this is terrible:

Interestingly, the VIX is not moving up too much: Energy is undeterred, not buying into the slowdown narrative: If you are trying to time the SQQQ roll, now is a good time to sell the $60s (best price) and then we can wait for a bounce to buy the $30s.

Worst thing is we're wasting that positive MACD momentum – we were counting on that for a tailwind.

Since the Nas lines are 1,000 points apart, each 200 points within the zones is significant (20%).  Notice the Nasdaq failed at the declining 200-hour (1-month) moving average and it should have support at the rising 50-hour (1 week) moving average.

Volume is dead though – so can't read much into anything.  You guys all seem to be on vacation too.

Couple people that I talked with today have already checked out, told me "I'll get to it after the 4th".

Yeah, hard to be in a work mode in the "stay at home" economy.

I'm surprised productivity hasn't tanked – although actually it was down 7.3% in Q1.  Essentially we had a rise in compensation without a rise in output and, theoretically, more to come as Real Hourly Compensation is still down 4.4% from last year – as we're not at all keeping up with inflation.

Next Productivity Report is not until Aug 9th, unfortunately.

Oh no, breaking even lower!

It's not big volume selling – simply a total lack of buyers.

looking for META  in butter fly

News:
Member
‘Influencer’ is now a popular career choice for young people – here’s what you should know about the creator economy’s dark side
By: Nina Willment
News:
Member
Neil Gorsuch to Non-Christian Kids Who Don’t Want Prayer in Public School: Get Over It
By: Dahlia Lithwick
sk2020
Member

I assume you are rolling to SQQQ 30s doing it because you have uncovered calls.

I have the following

News:
Member
From milligrams to gigatons: Startup that sucks carbon dioxide from the atmosphere is building a big new plant in Iceland
By: Cat Clifford
News:
Member
Don’t Blame Inflation on Stimulus Checks. Blame It on Corporate Greed
By: Edward Ongweso Jr
News:
Member
Texas Gov. Abbott lauded his state’s efforts to ‘secure the border.’ Hours later, he blamed Biden after dozens of migrants were found dead in a semi-truck.
By: Jake Epstein
News:
Member
How Russia’s vaunted cyber capabilities were frustrated in Ukraine
By: David Ignatius
News:
Member
Cisco confirms plan to exit Russia permanently
By: Steve McCaskill
News:
Member
Mapped: Energy Consumption Per Capita Around the World
By: Govind Bhutada
News:
Member
Twin Omicron subvariants have taken over the U.S., but they’re not quite identical. One is ‘the worst version of the virus we’ve seen’
By: Erin Prater
News:
Member
Extreme weather clearly linked to human-induced climate change, new study says
By: Rebecca Ann Hughes
News:
Member
Ron Johnson’s story keeps changing: He told a reporter “there was never going to be a chance of disallowing any elector.”
By: POLITICO
News:
Member
Former Meadows Aide Says Trump Demanded to Be Driven to Capitol on Jan. 6
By: Scott Patterson
malsg
Member

I knew I should have not gone into the office today … that's a lot of red!

META/QC – We have META in the LTP, not the Butterfly Portfolio:

We're playing it LIKE a Butterfly play, selling the short-term calls and puts – not working out too well for the short July $220 puts, is it?  Still, they can and will be rolled out and more calls will be sold.

Jan 6th/Wing – This new stuff about Trump is interesting – the Secret Service had to restrain him from going to the Capital to lead the insurrection.

WASHINGTON—Cassidy Hutchinson, a onetime top aide to White House chief of staff Mark Meadows, testified that former President Donald Trump was warned that members of the crowd attending his rally on Jan. 6, 2021, were heavily armed and still directed them to march toward the Capitol.

The 25-year-old former White House aide also said she was told that Mr. Trump insisted on going to the Capitol with his supporters, even as officials, ultimately successfully, tried to stop him.

Ms. Hutchinson recounted a dramatic altercation in the president’s limousine, known as “the beast,” after his Secret Service detail refused to drive him to the Capitol due to concerns of safety. She said Tony Ornato, White House deputy chief of staff, told her Mr. Trump tried to grab the steering wheel of the vehicle and lunged at Robert Engel, head of his detail, after Mr. Engel told him he wouldn’t take him to the Capitol.

“I’m the effing president, take me up to the Capitol now,” she said Mr. Trump said. Mr. Engel said, “Sir, we have to go back to the West Wing.”

Ms. Hutchinson said Mr. Trump was concerned that turnout at the rally was limited by magnetometers that were keeping supporters from attending. She said she overheard him saying something to the effect of, “I don’t f—ing care that they have weapons. They’re not here to hurt me. Take the mags away. Let the people in, they can march to the Capitol from here.”

In her testimony, Ms. Hutchinson said that Pat Cipollone, chief White House counsel, objected to any attempt by Mr. Trump to go to the Capitol on Jan. 6. “We’re going to get charged with every crime imaginable if we make that movement happen,” she said Mr. Cipollone told her the morning of Jan. 6.

Nasdaq below Friday – Others barely over: