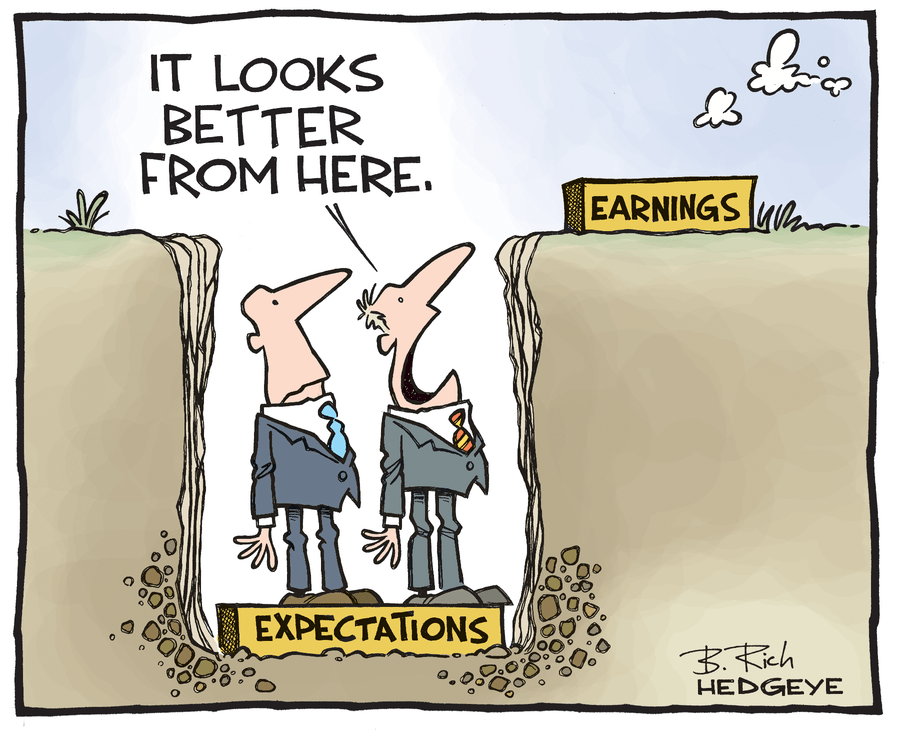 “Global volumes declined as macroeconomic trends significantly worsened later in the quarter, both internationally and in the U.S. We are swiftly addressing these headwinds, but given the speed at which conditions shifted, first quarter results are below our expectations.” – FDX CEO, Raj Subramaniam

FDX is down 20% and their profit warning is dragging down other shippers (UPS is down 7%) and, fortunately, FDX is not a Dow component but blaming the Global Economy for their problems is spooking the whole market.  China is shut down again, Europe is a mess, Currency issues are plaguing the company but, in REALITY, revenues are still $23.2Bn vs $23.52Bn originally expected so blaming the Global Economy for guiding earnings down 33% on a 1.3% revenue miss is disingenuous to say the least.

The company is predicting an even worse Q2 (fiscal) with a 50% reduction in earnings forecast ($2.75 from $5.46) on perhaps 5% less Revenues ($23.75Bn) so again – the Global Economy is doing their part with a very slight miss – this is an internal FedEx issue – not the end of the World – they are just blaming the World for whatever is ailing them.

The company is fighting back with cost cuts including a reduction in flight frequencies, volume-related reductions in labor hours, consolidation of sort operations, cancellation of planned network capacity and other projects, deferral of hiring, and closure of over 90 FedEx Office locations. It also plans to shutter five corporate office facilities but all those laid-off employees will be very happy to know that the company is also buying back $2.5Bn worth of their own stock in the next 6 months (now that they’ve put it on sale).

We haven’t had FDX in the portfolio for a long time but this seems like a nice opportunity to take a stab at them.  We’ll be reviewing the rest of the LTP later today in our Live Member Chat Room.  It should be a great day to spend money improving our positions because I don’t see why FDX having 1.3% less revenue should make IMAX any cheaper and we’ll get a very nice view of panic lines for the indexes as we continue to sell off ahead of the Fed (next Wednesday): As long as 3,840 holds (post Fed) then we’re still improving over where we were in June.  At 4,320 we cashed out half our positions because the market was way ahead of where it should be – now it’s where it should be – there’s really nothing to worry about, not even FDX.

And no, we’re not going to bounce back to the highs we never should have been at – not until the Fundamentals catch up and that could take years.  THIS is the range we belong in so stop being shocked when we’re in it.  We’ve reviewed 6 of our 7 portfolios this week and, for the most part – we’re happy with our targets and haven’t found the need to adjust – despite the very bad week the market has had.

The LTP is sitting on $1.2M in cash, 63% of the portfolio, so we’re looking for ways to deploy it as our Short-Term Portfolio (STP) has about $5M in downside protection.  I’m a lot more concerned about missing out on buying opportunities than I am about getting burned by a big move lower.

To some extent, that’s up to Powell and the Fed next week but I smell peace in Ukraine soon (before Putin is totally embarrassed) as Xi Jinping just met with Putin and it did not go well for the Russian leader.  Thanks to a last-minute save on the Rail strike, the supply chains continue to improve and, as to the Fed – 0.75% or 1% – who cares?  What matters is when they stop and anything under 6% is a gift and the plan still seems to be 4% and this meeting will put us at 3% or 3.25% – either way there are more hikes ahead – so learn to live with them. 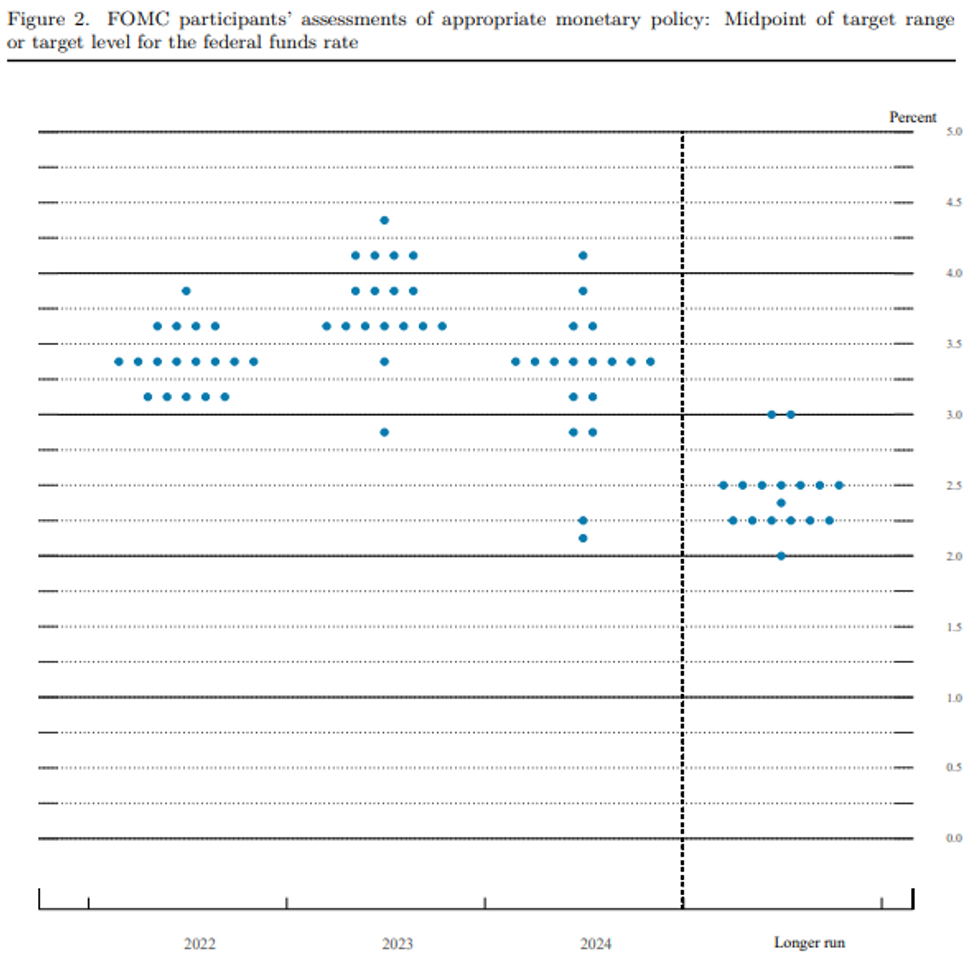 Again, 4-6% interest rates are NORMAL, not a punishment!   Powell hasn’t gone insane – 0.25% WAS insane!  Get a grip people.  The free money train ride is over and now Americans and our Corporate Masters have to figure out how to work and exploit workers in the real World – until they can come up with another crisis to throw money at, of course…

Biden’s strategy to end hunger in US includes more benefits

phil, as a short term trade, what about buying now in the premarket? do you think it could stay down 22% in one day?

i’m sorry, i forgot to say i meant FDX.

ok, nevermind. been looking at the chart, and it looks like they just shaved off the covid premium down to 2019 levels. guess it could be stuck down here or lower for the day. it’s awfully tempting, though. for a short term scalp.

I’m not worried as 3,840 is still solid support and we were bound to test it ahead of the Fed — just didn’t think it would be this week.

FDX/Gunder – I think they have monumentally F’d up the Q (and the next) and you’ll be hearing all sorts of things about the death of FedEx this weekend. I don’t love them enough to day trade but selling 2025 $120 puts for $20 should make some nice, quick money when they do bounce. Down to $159 already! FDX seems silly cheap now. And I am still not convinced about a worldwide recession to the extent they are claiming. Seems more likely they just over-projected.

Phil/NG – Doesn’t seem likely Europe will just go back to relying on Russia even after a withdrawal from Ukraine. LNG is here to stay also. Hurricane season coming up and lower than average inventories for a projected colder winter. Seems likely NG will continue to be volatile. Any thoughts? Thanks.

Russia screwed themselves by being an unreliable supplier of /NG and the US producers are certainly ready to step up and fill that void. In two years, there will be a conga line of ships taking /NG from US to Europe and Russia will have to hope China will buy it from them.

Not sure how many know this, but FDX drivers work as contractors and they’ve had issues with the contractors due to rising costs. Every FDX and delivery person you see isnt an employee of FDX.
This relates to Fedex ground. FDX has renegotiated contracts over the past few months. Probably took a bite out of EPS.

It’s clearly internal cost issues rising faster than they can raise prices (which are already insane).

As I was saying the other day – it’s a whole industry based on underpaying workers to make a profit – not to mention the hidden environmental costs of flying packages around that could just as easily be sent by train and truck for 1/10th the fuel costs.

If FDX hadn’t marketed overnight delivery and gotten people to rely on it (and AMZN abuses it too) then we’d all be just fine with 1 week deliveries 98% of the time.

Yes sir, FDX had the upper hand when they could demand unreasonably high prices because of unsustainable high demand, I think the macro changed, but mostly for FDX.

Well, I was working on adding the LTP review to yesterday’s post but my computer froze. I just got back up and running so we’ll see how much I lost.

Morning!
Phil INTC
I’ve refactored my position to the 25’s 25/40 BCS for $5.0 with a few naked 25$ calls to sell against. Would you recommend selling the short term calls now or wait for a pop. I’m notoriously sucky at timing the market.

It’s not morning so I can’t answer your question: https://www.dailymotion.com/video/x2hwqn9

So yes, I’d give them a chance to go higher before selling short calls.

Phil,
Agree that there will be a conga line of ships carrying /ng from US to Europe for next few years. It would be crazy for Europe to rely on Putin again even if there is a ceasefire soon. What would the good trading opportunities be assuming that conga line is going to happen?

Remind me over the weekend – have to consider who benefits most from expansion. LNG, of course…

Indexes still weak so we’ll just have to wait for the Fed.

Well, there is some attempt at a save, but it’s kind of sad.

Pretty sure you meant STP here:
“At least that’s been 50% offset by gains in the LTP”

Yep, that is what I meant.

Have a great weekend folks!