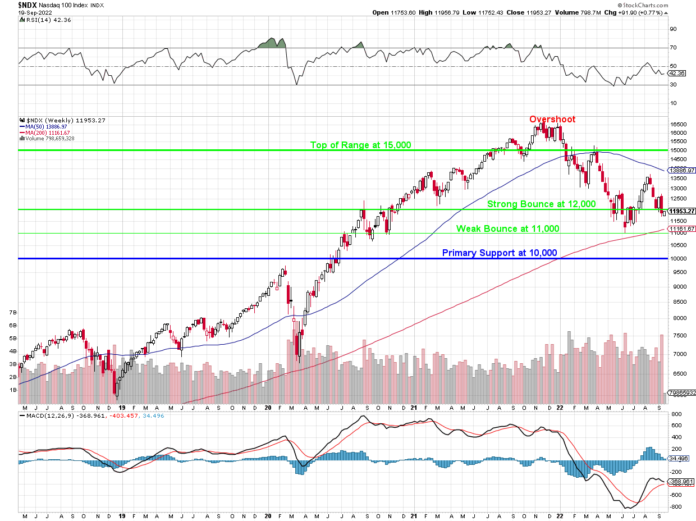 We’re still in our range. Granted, it’s a very big range but that’s what happens when you make very big gains in a very short amount of time – we never built up the support necessary to hold that ridiculous run-up.  Good thing too as stocks were downright unattractive at 15,000+ but, at 12,000 – we find plenty of good values on the Nasdaq.

For all the hand-wringing last week – we are still on track to be between 12,500 and 13,000 into earnings next month – which is where we expected to be sine last quarter. As I keep saying, what we had in the first half of the year was a CORRECTION and that is not the same as a crash or a sell-off as both of those things imply something went wrong and will be fixed.

In this case, what went wrong was our entire 2021 move from 12,000 to 16,000, a 33% gain in the index fueled by 2 years of Fed and Government stimulus to the tune of $11Tn.  THAT was the unnatural thing.  Take away the extra money and now we see how these stocks do on their own in the real world.

Notice the analysts don’t talk about this – because it’s complicated and doesn’t make a good sound-byte.  Giving the economy $11Tn over 2 years is 25% of our annual GDP and, like a blood transfusion – if it’s what we need, it’s what we need.  But did we NEED to pretend everything was fine when it wasn’t?  Also, what’s the cost of all that blood?  As you can see from the chart below (and every time you take out your wallet) inflation is part of that cost: 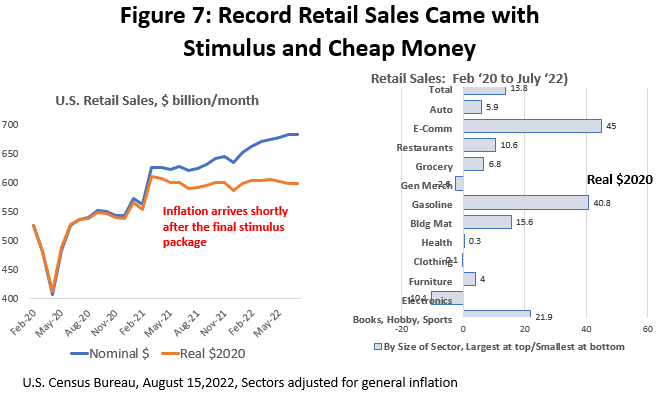 So Retail sales are up 16.66% but the actual AMOUNT of physical goods purchased has gone down – we are just getting less stuff for more money.  Apparently, we’re not willing to give up the stuff at any price.  As you can see Gasoline is a very big driver of inflation and that’s come back down quite a bit.  Keep in mind paying $100 a tank to drive back and forth to work for a week does not make you more productive than paying $50 did – it’s nothing more than a money sink to the Consumers (as are all fuel costs to Industry as well).

The other huge bump in spending comes from our friends at the Nasdaq, with E-Commerce having jumped 45% in two years.  E-Commerce is the master of nickel and diming you to death and you hardly notice all the fee increases until you realize you’re now paying $200 a month to watch TV (and we used to think no one would pay $10/month for cable) and another $200 to have Internet (which we can’t live without) and we used to pay $3.99/month for a phone line but they gave you a Princess Phone and our Dads used to complain about that cost!  And don’t even get me started on Amazon: There’s your death by 1,000 cuts – $20 here, $20 there and you can’t quite put your finger on it but suddenly there’s a lot more bills than there used to be.  That’s their business model – AMZN, NFLX, the entire Internet used to be very cheap (they even lost money providing the services) and they got themselves to be an indispensable part of your life – and then they put the screws to you.  You know who else has that business model?  Drug dealers…

Anyway, so the point is it’s good to invest in drug dealers – they have addicted customers and huge mark-ups and the Nasdaq drug dealers have, so far, been able to escape prosecution for most of their crimes (the EU is beginning to crack down on privacy violations and monopolistic practices but they still get to topple Governments, so the EU Government will probably change before Big Tech policies do).

Lots of things are back on sale and, once we see how much damage the Fed does tomorrow (we’re still thinking this is it but not brave enough to go all in), we can start looking for things to buy again, like Generac (GNRC) which is back at $200, where we liked it last time.

We will add GNRC back into our Long-Term Portfolio with the following spread:

In reality, the Jan $210 puts are $30 so if we can roll $50 lower in strike by adding 2 years – it’s only 6 years until our obligation goes to zero.  As long as they don’t suddenly go bankrupt, we should be fine.

Which reminds me of RH, which is being priced like it’s going BK – we’ll do that one in Member chat – see you there! 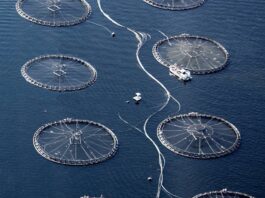 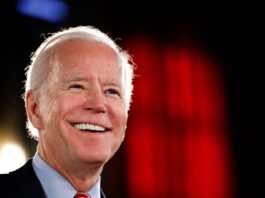 GOP Vows to Impeach Biden, Will Get Back to Us When... 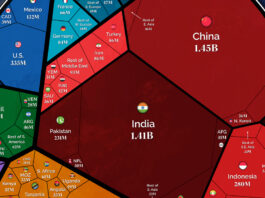 Visualized: The World’s Population at 8 Billion

GNRC during hurricane season, usually good for a blip. Kind of like HRB and tax season, wait HRB looks like it was good all year ﻿ 🙂 ﻿

Happy Tuesday Everyone. Did the webinar from last week get posted to youtube? It did not hit my feed yet.

Not sure why not, I’ll have Andy take a look.

F had a profit warning and everyone is freaking out again. It’s “just” supply-chain issues, no like we didn’t expect it.

F down at $13.50 again. Good thing we covered. Next we will roll because these are short-term issues.

August saw a rebound in new car registrations of 4.4%, closing the consecutive thirteen month decline. However, with 650,305 units registered, this result remains far below pre-pandemic levels. Four EU markets saw considerable gains: Italy up 9.9%; Spain up 9.1%; France up 3.8% and Germany up 3.0%. It is the first month of Y/Y surge in sales in 2022.

July had a drop of 10.4% in new car registrations in EU, despite an already low base of comparison caused by the ongoing semiconductor shortage. Eu major markets performed worse compared to last year with Germany and Spain down 12.9% and 12.5% respectively posting the strongest declines. 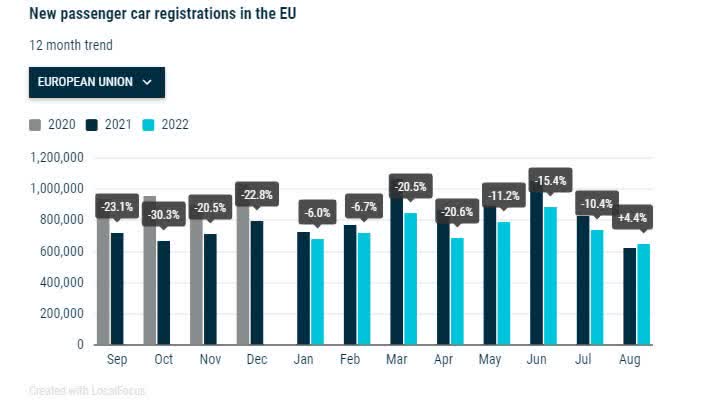 Looking at YTD numbers, volumes contracted by 11.9% to reach nearly 6M new passenger cars sold. Despite August surge, prior month declines are playing a dominant role. Key markets YTD show decline of 18.4% in Italy; drop of 13.8% in France; drop of 9.8% in Germany and 9.4% fall in Spain.

Looking at previous monthly reports: ‘EU passenger car registrations down 15.4%, lowest month of June on record in terms of volume since 1996‘

So much for the gains (this is why Monday’s are meaningless). Stocks Fall Ahead of Fed Meeting

Eurozone Bonds Swept Up in Selloff

Pressure on corporate earnings and investors’ willingness to pay could make it harder for major stock indexes to climb out of the gully in which they find themselves.

I like them but you may have to ride out a recession for a couple of years. Don’t buy anything you won’t be happy to DD on if they drop 50%.

AAPL/Phil Wondering how you would consolidate this position and take some $ off the table assuming we might get a move up in AAPL?
What about rolling the ’24 $150s to some ’25 $140s?

Getting a bit late for a magical save but yesterday it was almost 3pm so we’ll see.

Otherwise, it will be up to Powell to save us (good luck).

Real estate stocks are coming under pressure as traders expect the Federal Reserve to push up its policy rate by another 75 basis points, for the third meeting in a row. That would increase mortgage rates, hurting the affordability of homes for more consumers.

The prospect of mortgage rates staying above 6%, vs. 2.86% a year ago, is pushing some prospective buyers to the sidelines.

Apartment stocks also be pressured by an increase in construction of multifamily units, part of the housing starts and building permit numbers released Tuesday morning. “Multifamily housing starts reached its best monthly performance in 35 years,” said Lawrence Yun, chief economist at the National Association of Realtors. “Apartment demand has been strong, with rents rising at a historically high pace.”

Once those units are built, the increase in supply may give landlords less power in raising rates.

Pizza stocks are struggling with inflation headwinds, soft demand in the mix

Of note, PZZA hit a new 52-week low earlier in the Tuesday session after Stifel lowered its price target to $100 from $120. “Our checks indicate the pizza category continues to struggle with transaction performance, despite the more intense promotional activity,” noted Stifel analyst Christopher O’Cull.

The analyst recently cut estimates on both PZZA and DPZ with momentum slowing down. “It’s unclear what might be driving the weaker pizza consumption; we surmise it’s a combination of consumer fatigue toward pizza, more delivery and take-out options as restaurants have pivoted toward these channels, and a lack of pizza delivery drivers limiting capacity,” warned O’Cull.

Meanwhile, Bank of America thinks it may take until 2023 for volume growth to help drive EBITDA higher.

Domino’s has a Seeking Alpha Quant Rating of Hold, while Papa John’s just dropped back down to a Sell rating.

Which is harsh as pizza is necessary for life.

No stick and the dollar is right about 110.

All up to the Fed tomorrow and they promise PAIN!!!

Haven’t owned INTC in a long time. My interest is starting to peak here. AMD/NVDA may have better offerings but at 40+ PE I think the risk is elevated with those 2 in a rising rate environment. I can see a double from INTC by 2024.

I agree, they are just in an investing cycle and should start turning back around after next year.

ABOUT US
FOLLOW US
©
wpDiscuz
15
0
Would love your thoughts, please comment.x
()
x
| Reply