“No, I would not give you false hope
On this strange and mournful day
But the mother and child reunion
Is only a motion away” – Paul Simon

Nike (NKE)’s 3% drop in Chinese Revenues was more than made up for by 19% gains in the rest of Asia and Latin America, 11% in Europe/Middle East/Africa and a whopping 30% gain in North America as kids got their shoe fixes back at the malls with 25% more footwear sales overall than last year.

And that is despite overseas numbers being dragged down 30% by currency conversions against the very strong Dollar.  Gross Margins were also strong at 42.9%, despite inventory liquidations and higher logistics costs.  NKE made $1.3Bn in Q3 AND built inventory up 43% over last year – ready for Christmas!  They also bought back over $5Bn of their own stock while it was low.

FedEx (FDX) also had a very nice 10% beat but Revenues were off by 4% but it was still better enough to make for an 5% gain in the stock in pre-market trading.  Lower Global volumes for express shipping was the major issue and the company is moving to cut costs but that’s because they are lowering outlook – so not that great.

Even pared back, FDX should make about $3.5Bn next year and $172 is $45Bn for the company, so call it 13x earnings and Fuel is their big wild-card.  FDX made our Watch List but failed early on due to too much International Business (currency concerns), $13Bn in Debt and reliance on Oil.

See how hard it is to make us happy?  We’re just very critical right now but we’d welcome a change in sentiment if the market can get a proper lift based on these reports.  We have over 100 stocks on our Watch List we’d love to buy if conditions turn around – but we’re still on pause into the new year. See how easy it is to predict the future?  Also note the broken “W” pattern – those are bad so we need to be back over 12,000 (where it broke) before there’s any safety at all and I’m not seeing that kind of catalysts so let’s not get excited about a little bounce on over-priced NKE or edge of disaster FDX. On the other hand, our little long play on Natural Gas (/NG) yesterday has already paid us over $1,400 per contract so congratulation to all who played along at home.  I think we can do much better but the sensible play here is to cash in one contract here for a $1,400 profit and put a stop on the other one at $800 ($5.44) so we lock in $2,200 in gains but we have room to run on the new contract.  There’s an Oil Report at 10:30 that’s too much of a wild-card to risk our gains on…

We’ll see what other opportunities pop up during the day.  Consumer Confidence and Existing Home Sales will be reported at 10 and the EIA Inventory Report is 10:30 and, later today, we have our Live Trading Webinar.

Jeremy Grantham warns of a massive stock market crash and highlights what to own in his 2023 outlook. Here are the 7 best quotes.

What CEOs Are Saying: ‘The Consumer Is Under Pressure’

This is something. Didn’t expect to see the Russians involved in taxis.

Taxi Driver was filmed in Brooklyn, there are a lot of Russians in Brooklyn… All connected… ﻿ 😎 ﻿

That’s a Pynchon novel right there 🙂

Good moves at the open and we’ll see what holds. FDX -2.62%
Dec. 21, 2022 8:41 AM ET
Stocks look poised for a higher opening on Wednesday, adding to the mild gains they eked out the previous day. Despite a choppy session, Tuesday’s advance allowed Wall Street to end a four-day losing streak. Here are some stocks to watch on Wednesday:

Looking to the rest of the week, harsh winter weather is expected to hit much of the U.S. Here are some stocks to watch related to that possibility.

Good morning everyone. Below is the link to today’s webinar. Please text me with any issues or concerns regarding login or subscriptions. 561-665-0780 Thank you and Happy Holidays!!!

SP500 +0.10%
Now!
As Wall Street turns the last couple of pages of 2022, investors are looking ahead to 2023. The S&P 500 (SP500), which has traded lower by roughly 20% for the current year, sits at the 3,850 level. Where will it land in 2023?
Amid ongoing uncertainty about the Federal Reserve and the health of the economy, experts have issued wide-ranging predictions. Depending on who you ask, the top analysts project anywhere from a double-digit rally to another double-digit retreat.
Looking at specifics, the Street’s top financial institutions see the benchmark index ending the year anywhere from as high as 4,500 to as low as 3,400. That means experts see anywhere from an 18% rally from current levels to a decline of 12%.
Jonathan Ferro of Bloomberg tweeted out a breakdown of 18 institutions and each of their 2023 S&P 500 predictions. Deutsche Bank was the most bullish of the group with a prediction of 4,500. Meanwhile, BNP Paribas led the bears with a call of 3,400.
While the top and bottom forecasts are widely separated, only three of the 18 analysts actually see another decline in 2023. On the whole, most experts projected a stagnant to slightly higher market.
Averaging all 18 of the firm’s calls together and the target for the S&P was 4,037.5. This would represent a modest rise of around 5%.
See below a breakdown of all 18 calls:

While the outlook may appear cloudy and difficult to predict for 2023, Wednesday’s price action is much clearer to see, as the major market averages opened trading higher.

Phil – at what point should we consider protein producers (TSN, PPC, etc.)?

Just had bird flu issues so after we see what kind of write-downs they had in Q1. Also, margin squeeze from feed and labor costs, etc. – no easy picks there.

Phil/GNRC: Any thoughts on their prospects? This is becoming a painful trade. Still short puts.

Long-term, the more weather events and the more people rely on solar and realize it’s cloudy sometimes, the more orders GNRC gets. They have build inventory back up and that’s drained cash but last year they were hit with supply-chain constraints so they figure better to be well-stocked. 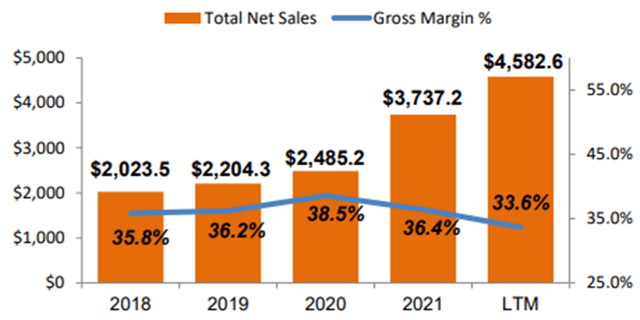 If that makes you want to walk away at $89, which is $5.7Bn with $563M in net profit – I won’t try to keep you in pain but, to me, this is when we buy more – not run away. If you are a value investor, you can’t let other people panic you out of positions just because the price is going down – price is not value.

The Yankees are a $5Bn team by general consensus but if there’s Covid or a Baseball Strike or if they have a bad year – are they a $2.5Bn team? Perhaps some shareholders may sell their shares at a $2.5Bn valuation but, unless the whole team sells for that price – the long-term shareholders are likely to be rewarded next time they win the playoffs – which they’ve done 40 times in the past 100 years with 27 World Series wins (but not since 2009).

It’s very obvious you can’t value a franchise team based on what they did last quarter or last year or even in the past decade – hence my logic with IBM last year – even though nobody wanted them at $115. There’s no such thing as “fair-weather” value investors. Well, there are, but those guys are broke!

Thanks Phil! Any new thoughts on T?

No new thoughts. They are a buy down here, the 5G roll-out is in progress and we’ll see how that goes over the next few reports.

Have you heard the quote that the pen is mightier than the sword?

Yes, I am familiar with the quote “The pen is mightier than the sword.” This quote is often attributed to English playwright Edward Bulwer-Lytton, who wrote it in his play “Richelieu; Or the Conspiracy” in 1839. The quote suggests that the power of words and ideas can be more influential and effective than physical force or violence.
The phrase “the pen is mightier than the sword” has become a popular saying and is often used to emphasize the power of communication, negotiation, and diplomacy as alternatives to conflict and violence. It suggests that the written word has the ability to persuade, inspire, and change people’s minds, and that it can be a more powerful tool for achieving goals and resolving conflicts than physical force.

Lots of valuation talk in the Webinar and notes on OpenAI, DallE and the future of art and media and a discussion of search technology.

Markets are holding up well, the Santa rally lives!

Unfortunately not, there is no value left there. We had hoped they would pass the Senate marijuana bill but now it’s been put off until next year and I don’t see the point in spending more money on another year of hope.