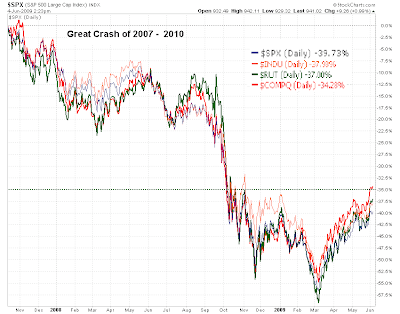 A trading day by trading day comparison of the Great Crash of 1929 – 1932 with the current market decline from its October 2007 top. 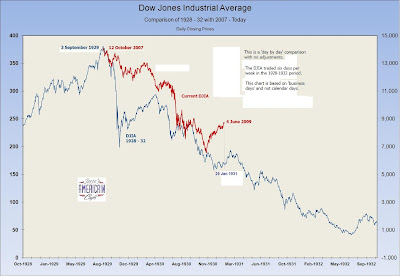 The classic profile of a collapsing bubble.

The economic policy of the early post-Crash period was heavily influenced by what was later called Liquidationism epitomized by prevailing views of the Hoover Administration. The idea was that allowing companies and banks to fail as quickly as possible, in a relatively uncontrolled manner, was the appropriate response. This view is still held by the Austrian School of economics.

The flaw in this theory would seem to be that the decline of a crash is not like a natural decline in a business cycle or a severe demand contraction, but the result of a precipitous collapse from a Ponzi-like monetary and credit expansion.

One can argue this point, endlessly if they wish to ignore history and economic reality, but again we need to remember that the outcome in several other nations embracing this theory was the rise of militant, fascist political regimes in response to societal dislocations.

Obviously the best cure is prevention, in not allowing monetary bubbles in the first place. Duh. But one has to play with the cards in one’s hand, and not the hand they wish to have.

But there is a lesson in this for our current ‘cure’ in that blowing yet another asset bubble from a monetary expansion, and little else, will not work. We ought to have learned this from the Fed’s policy responses in 2003-2006 which led to the US housing bubble.

Systemic reform and rebalancing is absolutely essential to a sustained economy recovery, and needs to be measured by an increasing median wage and a reversion to manageable income – debt ratios.

The headwinds against this remedy from an outsized financial sector that in many cases has coopted the political process makes a sustained economic recovery less probable without a significant shock to the political and economic structures of the US at least. 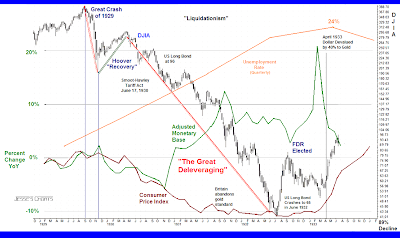 Being a student of economic history, Ben Bernanke believes that he can inflate the currency subtly without a formal devaluation, and avoid a second leg down to a deeper bottom.

The Fed is now confident, with the Volcker era inflation experience under their belts, that they do not need to replicate the NY Fed policy error of the 1931 by increasing nominal interest rates prematurely out of inflationary concerns.

Things ARE somewhat different today, in that there is no gold standard, and the world has relatively free flows of fiat capital under a US dollar reserve currency schema.

In a fiat regime the devaluation can be done gradually without fanfare. 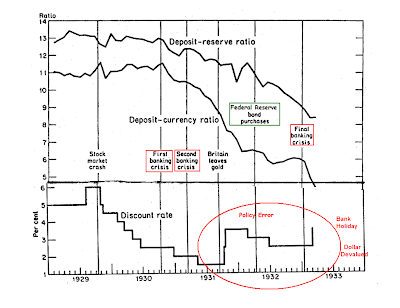 It is also easy to forget that in 1931 the business community and the leading economists were convinced that the worst was over and that a recovery was underway. Their concerns shifted to inflation, and dealing with the then unprecedented expansion of narrow money in the adjusted monetary base to ease short term credit problems. 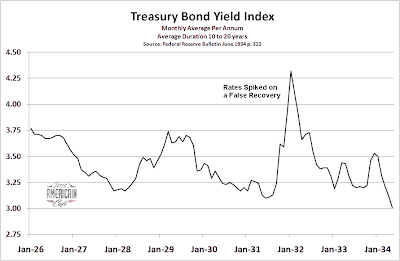 The ‘risk’ is obviously that the analog with the Fed’s experiment with subduing inflation in the 1970’s under Volcker are not completely consistent to the environmental context today.

The levels of US debt to be absorbed by the rest of the World are without known precedent. And the degrees of freedom in the Fed’s calculation are significantly impacted by the policy actions of countries that may be sympathetic but not completely consistent with their own national self-interest or inclinations.

From our own viewpoint, without signficant structural reforms to the US economy and political process, which at this time seem unlikely to overcome the resistance of the status quo, the Fed’s actions will most likely result in another type of bubble, less obvious than the last two perhaps, and a stagflationary economic recovery of a sort combing some of the nastier aspects of the Japanese experience, but with a nasty dose of the post-Soviet / Argentinian slumps.

A deflationary envionrment with a stronger US dollar appears to be a fantasy in our opinion, although we have always held it to be possible. Of course it is possible. If the Fed raised short term rates to 22 percent tomorrow, we would see a serious deflation and a stronger dollar.

We would also see riots and civil insurrection in response. This is another limiting factor on the policy decisions of the Fed and the Administration, which people tend to underappreciate, again ignoring many of the social and political events of the 1930’s.

The US dollar will continue to decline until there is a precipitating currency crisis that clears the market for US debt. Things will not be able to continue on this way forever. We estimate that the next bubble, if the Fed is able to get the rest of the world behind it, will be decisive.

However, we continue to degrade the probability of this happening as the weeks go by, and the rest of the world appears to be asserting its financial sovereignty from the Anglo-American banking cartel.