500,000 Will Exhaust Unemployment Benefits by September, 1.5 Million by Year-end

500,000 Will Exhaust Unemployment Benefits by September, 1.5 Million by Year-end

The Emergency Unemployment Compensation (EUC) program began in June 30,2008. Benefits under the act have now been extended twice. Unless Obama extends the program a third time, it’s the end of the line for many receiving unemployment benefits.

Thousands of jobless Pennsylvanians are joining the growing ranks of people around the country who are exhausting unemployment benefits, as some experts worry about another blow to a stumbling economy.

Gov. Ed Rendell said 17,800 Pennsylvanians exhausted their jobless benefits in the week that ended Saturday, the first big wave of Pennsylvanians to do so. He urged legislators to pass a bill to extend the benefits.

Around the country, the number of people exhausting their benefits is piling up. By the end of September, more than 500,000 people will exhaust their benefits checks, with the biggest groups in Pennsylvania, California and Texas, according to estimates by the National Employment Law Project, an advocacy group for low-wage workers based in New York City. That number will nearly triple by the end of the year, the group said.

The number of jobless New Yorkers across the state jumped significantly during the month of June, according to state Department of Labor statistics released Thursday.

The unemployment rate increased from 8.2 percent in May to 8.7 percent in June. That’s the highest level since October of 1992.

In New York City, the rate increased from nine percent in May to 9.5 percent in June — the highest level in more than a decade. That translates into more than 850,000 people out of work in the state.

Unemployment benefit extensions are expected to help an additional 47,000 jobless New Yorkers who would have lost their benefits in August.

79 Weeks is a long time to be without a job. Yet it’s happening in mass.

President Obama claims he will save 3.5 million jobs. When? Who gets to count? The reality is no one is counting and the number is fabricated. It is impossible to count "saved jobs" so Obama can pick any number he wishes.

How did Obama arrive at 3.5 million? Simple – It was the largest number he thought he could get away with.

Here is one of the charts. 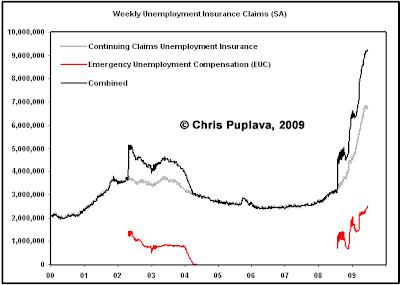 Note the dips in the EUC numbers and the corresponding dips in the total numbers. Compare to double extensions in emergency benefits:

The above chart was from July 10th. New Weekly Unemployment Claims figures came out on July 16. 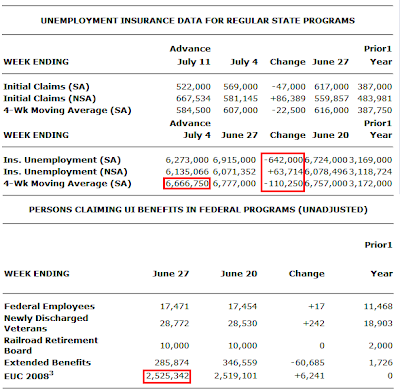 The key point now is the number of people whose benefits have expired or are about to, and those people will not show up at all in the above weekly unemployment releases.

Dave Rosenberg has an interesting chart of expiring benefits in Breakfast with Dave on July 17.

The Bureau of Labor Statistics said that the move in claims has nothing to do with any improvement in the economy. I think this is all about the fact that with GM and Chrysler in bankruptcy and all the permanent shuttering of plants and workers, there are fewer of these employees left that go though the normal seasonal shutdowns. So, fewer seasonal layoffs in the auto sector, I firmly believe, are behind these recent declines in initial jobless claims. We will know if this thesis is correct in a few weeks. (Also keep in mind that the shutdowns happened in June this year, not July, as is normal, and hence this is giving a skew downward to the claims data. To reiterate, these numbers are telling us nothing about the economy.)

So something with the seasonal factors is at play here; not the economy. Note that in the month after the seasonal auto effects ran their course last year, claims popped up more than 80,000.

To be sure, continuing claims plunged a record 642,000 to a still-high 6.273 million but this actually reflected bad news in the sense that it likely reflects the end of the up-to-20 weeks extended benefits that President Obama provided under the stimulus plan. These people are certainly not going to be doing very much spending over the next little while.

Also note that the claims data would be much higher if a record number of unemployed folks weren’t seeing their benefits cut off — see the chart below for an illustration of what we are talking about. 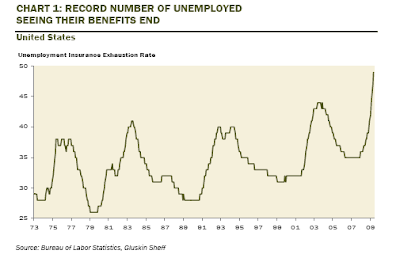