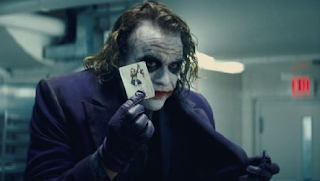 Courtesy of The Epicurean Dealmaker

Alfred Pennyworth: "A long time ago, I was in Burma. My friends and I were working for the local government. They were trying to buy the loyalty of tribal leaders by bribing them with precious stones. But their caravans were being raided in a forest north of Rangoon by a bandit. So we went looking for the stones. But in six months, we never found anyone who traded with him. One day I saw a child playing with a ruby the size of a tangerine. The bandit had been throwing them away."
Bruce Wayne: "Then why steal them?"
Alfred Pennyworth: "Because he thought it was good sport. Because some men aren’t looking for anything logical, like money. They can’t be bought, bullied, reasoned or negotiated with. Some men just want to watch the world burn."

I have argued elsewhere at length that the bulk of commentators and regulators confronting the Panic of 2008 and its aftermath put far too much emphasis on the supposed causal effect misaligned compensation incentives had on these events. While these no doubt added to the problem in some instances, for the most part the focus on banker pay is poorly judged. Some of this error can be laid at the foot of natural envy, but some of it can be attributed to a fundamental misreading and simplification of the investment banker’s character.

People continue to be excessively worried about investment bankers who are greedy, grasping, and covetous. Bankers who think of nothing but money. Bankers who are just like Joe and Ethel Sixpack, only richer, more ruthless, and less constrained by conscience.

But these are not the bankers we need to worry about. These bankers—who, make no mistake, do indeed exist—can be bought. If we cannot chase them out of too-big-to-fail banks where they make stupid or greedy decisions that harm our society and economy, we can encourage them to repay our bailouts to get out from under our yoke. These bankers are easy. We understand their greed and motivation, because it is essentially logical, and most of us share the same motivation to some degree, if only in paler, more attenuated form. These bankers are no challenge whatsoever.

But anyone who has spent real time in the trenches of investment banking knows that this description does not come close to exhausting the character of its practitioners. There are people in the industry who, when you get right down to it, have no real interest in money. People who couldn’t give a flying fuck in a rolling donut whether they make $3 million, or $10 million, or $100 million a year, as long as they make more than the next guy. People who look at income, and bonuses, and aggregate net worth as a scorecard in the great game of life. People who want to make the most.

Or, those rare birds who do the business because they love it, because it’s there, and because they can. People like a mentor I used to have who never should have worked a day in his adult life, according to any normal person’s calculus. Someone who married into vast wealth, but who spent thirty years in sweltering Boardrooms, shitty motel rooms, and executive committee meetings which would make a dockside knife fight in Calcutta look like afternoon tea with the Queen of England because he loved the work.

Finally, do not forget the psychopaths.

Do you really think some bureaucrat’s compensation limits are going to effectively constrain such people? Do you really think they will care? (I grant you, most of their wives will care. But that is what mistresses and prenups are for.) They will bitch and complain, but at the end of the day they will commiserate with compatriots over a 20-year single malt and a Cuban cigar and say "Fuck it." After all, most of these veterans were happy making 50%, 60%, or even 70% less money doing the same damn thing twenty years ago before Alan Greenspan turned on the liquidity spigot.

At best, Kenneth Feinberg’s compensation rules for the seven TARP firms and the Fed’s proposed guidelines on pay for the entire industry might chase out the opportunistic rabble who poured into the industry over the last decade to take advantage of its well-advertised pay and growing social prestige. People who, in other times, would and have flocked to law, or medicine, or technology startups and who, like rats off a sinking ship, will swarm onto another platform as soon as Michael Porter, or Seth Godin, or Sergey Brin identifies it for them.

Good riddance to them, I say. Let them go "add value" to some other poor misbegotten segment of society. Just watch your wallet when they show up on your doorstep.

But once these johhny-come-latelies leave, who will remain? I’ll tell you who: people against whom your pitiful, transparent little compensation levers will have no effect whatsoever. People who do the business because they love it, because they are good at it, and because there are only so many slots open in the natural ecosystem for pinnacle predators, and the Great White Sharks and Polar Bears got most of them first.

These people are dangerous because they are smarter than you, because they are smarter than any regulator likely to be sent to control them, and because they hold in their hands the map and the controls to the vast and intricate system of pipes and valves which undergirds the global economy. Give them any reasonable set of legal and regulatory constraints—more stringent than the recent past, by all means, I implore you—and they will happily adapt and innovate around them in the future. Push them, and box them in, and reinstate Glass-Steagall if you must: they will grumble, but they will get over it.

But can you imagine what would happen if you pressed them too far? If you tried to turn the entire financial industry into a bunch of unionized, rule-bound clerks? These are personalities who do not go gentle into that good night. All you would need would be for one or two of them to decide they would rather watch the world burn than crawl into a hole.

And believe you me, you do not have enough water to put out that fire.

Not that I’m making threats, or anything. I am a reasonable man.

Who is the Epicurean Dealmaker?  Read his bio:

ABOUT ME
THE EPICUREAN DEALMAKER — New York, New York, USA

I facilitate, justify, and advise parties to M&A transactions, when I am not advising against them. I have been doing this for almost two decades, mostly at a couple of big banks everyone has heard of and lately at an independent advisory boutique. I am one of the bad guys, if you like.

I remain anonymous because I enjoy my job, my apartment, and my family, and I would prefer not to give any or all of them up because I have insulted or ridiculed some vengeful member of the Great and Good. This is good for you, Dear Reader, because it means I will continue to insult and ridicule said G&G, which we all acknowledge to be a more amusing pastime than reading The Wall Street Journal stock tables. You are welcome.

Should you see me on the street, however, you will be able to recognize me easily. I am the distinguished looking, well dressed 6’5" gentleman with chiseled abs and gleaming teeth the size of dinner plates. Sorry, ladies: I am not available.