This is an effective articulation of why so many Americans who voted for Barack Obama and ‘change’ and reform feel betrayed, and rightfully so.

The funny thing is, the result would most likely have not been all that different if McCain had won, except the world might be worrying quite a bit about his health, given his utterly unqualified successor, the Decider in a skirt. American politics sometimes appear to be more like competing crime families and special interests than legitimate alternatives to national governance.

Well, at least an American President has not appointed his favorite horse to the Senate — yet. 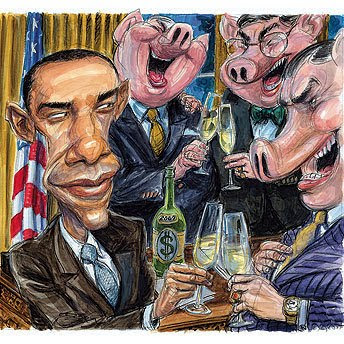 Barack Obama ran for president as a man of the people, standing up to Wall Street as the global economy melted down in that fateful fall of 2008. He pushed a tax plan to soak the rich, ripped NAFTA for hurting the middle class and tore into John McCain for supporting a bankruptcy bill that sided with wealthy bankers "at the expense of hardworking Americans." Obama may not have run to the left of Samuel Gompers or Cesar Chavez, but it’s not like you saw him on the campaign trail flanked by bankers from Citigroup and Goldman Sachs. What inspired supporters who pushed him to his historic win was the sense that a genuine outsider was finally breaking into an exclusive club, that walls were being torn down, that things were, for lack of a better or more specific term, changing.

Then he got elected.

What’s taken place in the year since Obama won the presidency has turned out to be one of the most dramatic political about-faces in our history. Elected in the midst of a crushing economic crisis brought on by a decade of orgiastic deregulation and unchecked greed, Obama had a clear mandate to rein in Wall Street and remake the entire structure of the American economy. What he did instead was ship even his most marginally progressive campaign advisers off to various bureaucratic Siberias, while packing the key economic positions in his White House with the very people who caused the crisis in the first place. This new team of bubble-fattened ex-bankers and laissez-faire intellectuals then proceeded to sell us all out, instituting a massive, trickle-up bailout and systematically gutting regulatory reform from the inside.

How could Obama let this happen? Is he just a rookie in the political big leagues, hoodwinked by Beltway old-timers? Or is the vacillating, ineffectual servant of banking interests we’ve been seeing on TV this fall who Obama really is?…

Read the rest of the story at Rolling Stone online here >>