US Cattle Herd Drops to 1958 Levels

US Cattle Herd Drops to 1958 Levels 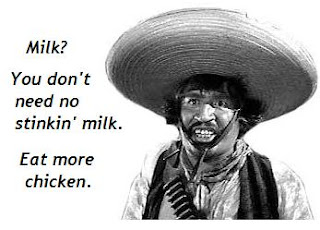 Ranchers are culling the herds as corn prices soar and wholesale prices for beef and milk drop.

My personal view is that this is a manifestation of economic distortions and malinvestment due to government interferience in a variety of feed markets over a number of years, as well as paper speculation driving prices in a way that is not connected with physical supply and demand.

Is there a significant change in American dietary habits and an oversupply of beef and milk? It does not seem as though the retail prices of milk and beef are dropping in concert with this, which may be dampening demand.

Let them eat iPads and CDO’s.

Jan. 27 (Bloomberg) — The U.S. cattle herd may have shrunk to the smallest size since 1958, as mounting losses during the recession spurred beef and dairy producers to cull animals, analysts said.

Wholesale choice-beef prices averaged $1.4071 a pound last year, the lowest level since at least 2004, as U.S. job losses climbed and meat demand waned. Corn, the main ingredient in livestock feed, jumped to a record $7.9925 a bushel in 2008 on the Chicago Board of Trade, and prices averaged about $3.79 last year, the third-highest annual average since at least 1959.

“There’s not much incentive to be building herds,” said John Nalivka, the president of Sterling Marketing Inc., a livestock-industry consulting company in Vale, Oregon. “Costs of production across the cow-calf sector and in dairy have gone up in the past two years, and prices have come down” for beef and milk, he said.

Futures prices for feeder cattle, the young animals that ranchers sell to feedlots to be fattened for slaughter, averaged 96.821 cents a pound last year on the Chicago Mercantile Exchange, the lowest level since 2003. Feeder-cattle futures for March settlement rose 0.2 percent yesterday to 98.975 cents a pound on the CME.

Cattle ranchers in the southern Great Plains lost about $34 on every breeding cow they owned last year, following losses of about $18 a head in 2008, according to Jim Robb, the director of the Denver-based Livestock Marketing Information Center, an industry- and government-funded researcher.

“We’re forecasting that beef production in 2010 won’t be the smallest since 1958, because the average animal processed now weighs twice as much,” Robb said.

The number of young female beef cattle held back for breeding in the U.S. may have fallen to 5.45 million animals, down 1.4 percent from 5.526 million a year earlier, according to the average analyst estimate.

Dairy farmers may be holding back 4.313 million young replacement cows for breeding, down 2.2 percent from 4.41 million at the same time last year, according to the average analyst estimate. The dairy herd is shrinking partly because of industry-funded cow culls last year aimed at supporting prices.

The so-called Cooperatives Working Together program removed about 252,000 dairy cows from production since December 2008, according to a statement on the group’s Web site.

“Last year was a terrible year for milk prices,” said Ron Plain, a livestock economist at the University of Missouri in Columbia. He said the industry-funded culling program is “one of the reasons why we’re down so much on milk-cow numbers from a year ago.”

The price of class III milk, used to make cheese, tumbled to a six-year low last year of $9.24 per 100 pounds, after global demand slowed. The price has rebounded 57 percent since then to $14.54 yesterday on the CME.