Commodities Kiss of Death? Is The Reflation Trade Over?

Commodities Kiss of Death? Is The Reflation Trade Over?

Another pension alarm bell is ringing in Sacramento, this time at the teachers retirement system, where the nation’s second-largest public pension fund is reporting a $43-billion shortfall.

The California State Teachers’ Retirement System said that as of June 30, 2009, it could meet only an estimated 77% of its future pension obligations — far less than the 100% recommended by actuaries.

Known as CalSTRS, the fund took a big hit during the 2008-09 fiscal year, losing a quarter of its value. Since then, its investment returns have improved, but the growth isn’t strong enough to keep up with a widening funding gap.

What’s worse, CalSTRS Chief Executive Jack Ehnes said in a report to be presented to the board Feb. 5, the fund could be broke in 35 years — the length of a typical teaching career.

To avoid that calamity, Ehnes wants the state Legislature to raise employer pension contributions paid by the state and, indirectly, California’s 1,043 school districts in the next few years.

Rolling The Dice With Commodities

Given there is virtually no chance the legislature will pony up $43 billion, CalSTRS considers rolling the dice on commodities. Hell why not? Taxpayers are on the hook if it does not work out.

The California State Teachers’ Retirement System, the second-biggest U.S. public pension, is considering investments in commodities to boost returns and provide a hedge against inflation and slumping equities.

The governing board of the fund, with $134 billion under management, is scheduled to hear today a staff report in Sacramento that recommends its first-ever commodity investment. The board will decide whether to seek additional research on strategies and portfolio weightings.

“Commodities historically exhibited low correlation to equities and bonds and produced double-digit returns when equities fell,” Innovation and Risk Director Steven Tong and Investment Officer Carrie Lo said in a report to the board. “In effect, commodities may act as an insurance policy, realizing low single-digit returns over the long run but generating large double-digit payoffs in the event of a negative shock.”

Commodity prices have surged since 2001 as global economic growth led by China, the fastest-growing consumer of raw materials, spurred demand for metals, energy and grains. Copper prices have quadrupled in the past eight years, and crude oil has more than doubled. Higher prices have attracted increased interest from hedge-fund managers and pension funds.

Investors poured about $60 billion into commodities through index-tracking and exchange-traded funds and medium-term notes last year, and should add at least that much in 2010, according to a December survey of 250 investors by Barclays Capital.

Pension plans are looking to hop on the commodity bandwagon now after copper prices have quadrupled in the past eight years, and crude oil has more than doubled.

Is that a good thing?

Is that a good thing? 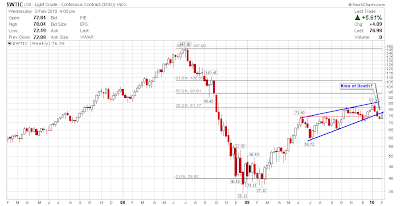 China is on the verge of imploding (or blowing up attempting to prevent a implosion) yet pension plans and other misguided souls are plowing into China and commodities. These are contrarian indicators.

If you want another contrarian indicator, look no further than Australian central bank sees 3.25%-3.5% growth ahead.

The RBA said housing construction has turned around and "is also now providing a boost to domestic demand," and that "stronger employment data have helped lift consumer confidence which, together with a recovery in household wealth, has supported consumer spending, despite the fading of the effects of the earlier cash payments to households."

Which way? Australia housing is on the verge of a massive plunge and the RBA surprised 20 out of 20 economists by holding rates steady. The governors are spooked and they come out and make nonsensical statements like that. I am in awe.

Please see Pool of Greater Housing Fools in Australia Finally Runs Out; OZ Dollar, Where to From Here? for what’s really going on in Australia.

The following video on China is quite good, but it is very long.

I side with Chanos.

Yet, I am a also believer in peak oil and commodities for the long haul. However, for the short-to-intermediate term I am sticking with my target for the price of crude to fall back to $55.

There is no fundamental basis for crude oil to go higher now, and there certainly is no good reason to be in love with China either. Bear in mind, just because there is no good fundamental reason for something to happen, does not mean it won’t.

That segment with Aaron Task is from Tech Tickers Mish: Expect Harder Times in 2010

From President Obama on down, Americans are hoping Friday’s stronger-than-expected November jobs report marked the beginning of the end of our national unemployment nightmare. Looking beyond the November jobs data, Shedlock says the odds of the unemployment rate coming down anytime soon are remote.

As confident as he is about the grim outlook for jobs, Shedlock was very reticent to make market predictions in the accompanying video, taped Friday evening at Minyanville’s annual Holiday Festivus in New York City.

In a subsequent email, Shedlock was more willing to take a position, as is more typical of the opinionated blogger:

"In the absence of a war outbreak in the Middle East or Pakistan — and/or Congress going completely insane with more stimulus efforts — I think oil prices are likely to drop, the dollar will strengthen or at least hold its own, and the best opportunities are likely to be on the short side," he writes. "2010 is highly likely to retrace most if not all of the ‘reflation’ efforts of 2009. If things play out as I suspect, 2010 will be the year of the great retrace as the economic recovery disappoints."

The prudent thing to do is to step aside, waiting for better opportunities down the road, a theme I have been harping on for months.