Modern Economic Myths and The Failure of Financial Engineering

Modern Economic Myths and The Failure of Financial Engineering

The housing bubble did nothing for real median incomes in the US but it did wonders for the insiders in the financial sector.

This is why the average Joe in the States went into debt to continue to maintain their consumption.

Until this situation is addressed, there will be no sustained economic recovery in the US. 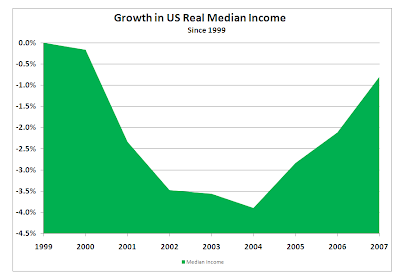 Trickle down or supply side economics does well for the upper percentiles of income but does much less for the median wage. 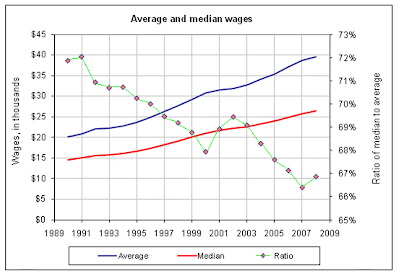 Why care? For several reasons.

First, the median wage is the bulwark of general consumption and savings, and the prosperity of a nation. It must match the character of the social fabric, or place a severe strain on the contract between classes and peoples. A nation cannot survive both slave and free without necessarily resorting to repression.

Second, in any relatively free society, the reversion to the mean in the distribution wealth and justice is never pleasant, and often bloody and indiscriminate.

There are several economic myths, popularized over the last thirty years, that are falling hard in the recent series of financial crises: the efficient market hypothesis, the inherent benefits of globalization from the natural equilibrium of national competitive advantages, and the infallibility of unfettered greed as a ideal method of managing and organizing human social behaviour and maximizing national production.

One has to wonder what would have happened if some more coherent, approachable science, had put forward a system of management that relied upon the nearly perfect rationality and unnatural goodness of men as a critical assumption in order to work? They would have been laughed out of the academy. Yes, there is a certain power to befuddle and intimidate common sense in professionally specific jargon, supported by pseudo-scientific equations.

Why doesn’t ‘greed is good’ work? Because rather than work harder, a certain portion of the population, not necessarily the most productive and intelligent, will immediately seek rents and income obtained by unnatural advantages, by gaming the system, by cheating and coercion, by the subversion of the rule of law, which will sap the vitality of the greater portion of the population which does in fact work harder, until they can no longer sustain themselves.

What will take the place of these modern economic myths? Time will tell, and it will vary from nation to nation. But the wind of change is going to be blowing a hurricane.