Much Ado About TED, LIBOR, and Currency Swaps

Much Ado About TED, LIBOR, and Currency Swaps

There is some alarm being expressed about the recent increase in the TED spread from some quarters this week.

Here is a short term chart of the TED. It is definitely elevated expressing the accelerated demand for dollars in Europe. Although the BIS reports will not catch up with this action for quite a while, I suspect we are seeing a replay of a flight away from dodgy assets such as dollar denominated CDO’s that European customers had deposited with their banks that are now being liquidated again. Also, and undeniably, there is a flight to gold, Swiss francs, and US dollars from the Euro as the ECB and the EMU sort out their serious issues brought about by a single currency and monetary policy working across a wide diversity of localized fiscal conditions. 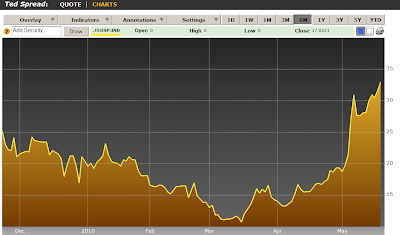 However, here is the longer term picture of the TED spread. As you can see, it is a bit too early to hit the warning sirens. But it does bear watching. 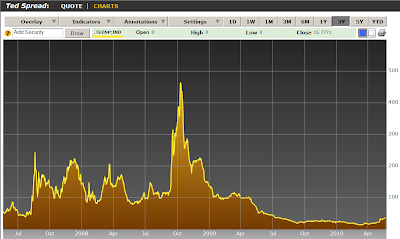 The long view is not very dramatic, and also not as useful for promoting short euro hedge fund trades, or for generating viewer clicks.

For some additional perspective, here is a chart of the one year LIBOR rate.

Here is a short term view of LIBOR in US Dollars. It is definitely elevated.

But here is a similar short term view of LIBOR expressed in ECU’s. By comparing the two LIBOR charts one might think that there is an elevated demand for dollars, probably attributable to a flight to safety. The DX chart indicates that it seems to be peaking. But it can always take a turn for the worse.

And while we are at it, here is a reprise of a prior discussion of the Fed’s swap lines with Europe, designed to relieve imbalanced demand for dollars.

The US is indeed contributing to the bailout of Greece, via its membership in the IMF. But not through the currency swap lines, unless there is something else going on there behind the scenes. Since the US owns the biggest printing press in the world, at least for now, that would not be a shock.

There may be a time to worry about European insolvency. But quite a bit of what we are hearing about Europe these days seems a bit overwrought, and spoken from the perspective of a particular set of speculative trades.