Double the Fun – ARIA and TSRX

We are nearing the end of October, and the FDA has been in a foul mood. PSW members played several of these companies up to the FDA date, but now the day of reckoning has passed and no No, NO were said to Amylin, Alexa, and Jazz Pharmaceuticals. Arena is still waiting (actually a NO as well on late Friday night from the FDA), and Vivus is on tap for the end of the month. There are a few more we are watching and one we should play (Protalix Bio), but otherwise we are patiently waiting for Curis and Ariad to announce their data for a hedgehog inhibitor and mTOR inhibitor for cancer, respectively.

The mammalian target of rapamycin (aka mTOR) is a is a serine/threonine protein kinase that regulates cell growth, cell proliferation, cell motility, cell survival, protein synthesis, and transcription (DNA to RNA). mTOR belongs to the phosphatidylinositol 3-kinase-related kinase protein family.  Figure 1 shows the pathways which may activate mTOR.  When the kinase activity of mTOR is activated, its downstream effectors, the synthesis of cell cycle proteins such as cyclin D and hypoxia-inducible factor-1a (HIF-1a) are increased.  HIF-1a then stimulates VEGF (A VEGF inhibitor is Avastin).  Treatment with the mTOR inhibitor, Temsirolimus, leads to cell cycle arrest in the G1 phase, and also inhibits tumor angiogenesis by reducing synthesis of VEGF. 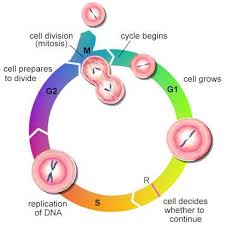 Ariad Pharmaceuticals (ARIA) was first noted in August 2009 and in April 2010.  The bull call spread with the sale of puts was a winner when ARIA was under $2.  Since that writing, Merck has taken over full development of ridaforolimus and paid a nice chunk of change for it (before the compound was under joint development).  The phase III clinical trial of ridaforolimus in metastatic soft-tissue and bone sarcomas responsive to chemotherapy, named SUCCEED (Sarcoma Multi-Center Clinical Evaluation of the Efficacy of Deforolimus), was recruiting patients starting in December 2009, and data are due out in 1Q11.  I like the $3.50/$5 May11 bull call spread for 50c or better, selling the $3.5 Dec10 puts for 25c or better (25c net entry).  ARIA has other interesting compounds in the pipeline for cancer (multi-targeted HDAC inhibitor), but all are too early for deciding upon.  Data for ridaforolimus are not expected before January, so this gives a safe entry of letting the stock stay range bound and minimize the risk into the new year.  I currently own the same bull call spread in February, but will move to the May options next week.

The second company which has potential and has been mentioned in member chat is Trius Therapeuitcs (TSRX).  The company went public in August 2010 and the stock opened around $5.  Trius works on antibiotics and their flagship product, torezolid phosphate, is in Phase III trials for for the potential treatment of Gram-positive bacterial infections, including complicated skin and skin structure infection (cSSSI).  ABSSSI are infections that involve deeper tissue or require surgical intervention (e.g. cellulitis, major cutaneous abscesses, and infected wounds) or are associated with a significant underlying disease (e.g., diabetes or systemic immunosuppression) that complicates response to therapy.  A variety of pathogens may be identified in ABSSSI but the two most common Gram-positive pathogens are Staphylococcus aureus and Streptococcus pyogenes. The significant increase in the incidence of MRSA (Methicillin-resistant Staphylococcus aureus) in community as well as hospital acquired infections has resulted in a need for therapy of ABSSSI that is effective against MRSA.

In addition, the company has several grants under a contract with the U.S. government, including:

I like the company for a hold, and Phase III data are due out late next year, as they are actively recruiting patients for their trial (started in August 2010). There are no options, so buy in small lots on pullbacks (low is $3.50).  I do not currently own TSRX (my buy did not get filled on Thursday).

Pharm  Thanks for the update on ARIA