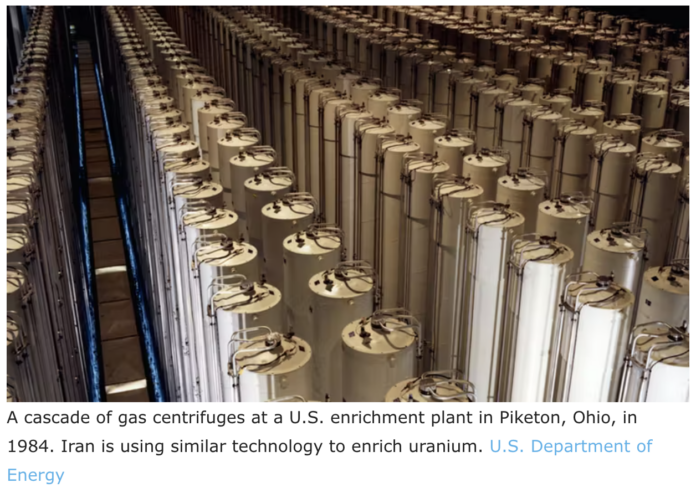 Iran’s nuclear program is a major topic in President Joe Biden’s meetings this week with leaders in the Middle East. The most challenging part of producing nuclear weapons is making the material that fuels them, and Iran is known to have produced uranium that is near-weapons grade.

The Conversation asked Brandeis University professor Gary Samore, who worked on nuclear arms control and nonproliferation in the U.S. government for over 20 years, to explain why uranium enrichment is central to Iran’s nuclear ambitions and where the Iranian effort stands now.

What does it mean to enrich uranium?

Natural uranium contains two main isotopes, or forms whose atoms contain the same number of protons but different numbers of neutrons. It’s about 99.3% uranium-238 and 0.7% uranium-235. The uranium-235 isotope can be used to generate nuclear power for peaceful purposes, or nuclear explosives for military purposes.

For military purposes, why are higher levels of enrichment important?

The higher the level of enrichment, the smaller the amount of nuclear material necessary to produce a nuclear weapon.

The International Atomic Energy Agency identifies 25 kilograms (55 pounds) of 90% enriched uranium as a “significant quantity” necessary for a simple nuclear weapon. But larger amounts of lower-enriched uranium can also work.

From a nuclear weapons design standpoint, smaller amounts of higher-enriched nuclear material are more desirable because that reduces the size and weight of the nuclear weapon and makes it easier to deliver. As a result, modern nuclear weapons based on uranium typically use uranium enriched to 90% to 93% U-235, which is known as weapons-grade uranium, for the primary fuel.

What had Iran achieved prior to the 2015 nuclear deal?

The 2015 nuclear deal between Iran, the U.S. China, France, the United Kingdom, Russia and Germany put significant restrictions on Iran’s nuclear program, in return for relief from a number of international sanctions. When the deal was adopted, Iran had mastered the basic technology for enriching uranium with gas centrifuges – cylinders that spin uranium in gas form at very high speeds to separate the heavier U-238 isotope from the lighter U-235 isotope.

Based on these capabilities, Iran’s “breakout time” to produce about 25 kilograms (55 pounds) of 90% enriched uranium – enough for a single nuclear weapon – was estimated to be one or two months.

Breakout time is not intended to suggest that Iran would necessarily decide to produce weapons-grade uranium at these inspected facilities, because the risk of detection and of potential negative international reaction is very high.

President Biden arrived in Israel, nearly 50 years after his first trip as a senator, on Wednesday to open his Middle East visit to focus on slowing down Iran’s nuclear program, getting oil to American gas pumps and improving relations with Saudi Arabia. https://t.co/om6Pw4udVx pic.twitter.com/0jrnxRP93p

How did the nuclear deal constrain Iran’s activities?

The 2015 nuclear deal put physical constraints on Iran’s enrichment program for 10 to 15 years, including the number and type of centrifuges Iran could operate, the size of its stockpile of low-enriched uranium and its maximum enrichment level.

In order to meet these physical limits, Iran shipped out to Russia most of its stockpile of low-enriched uranium and its entire stockpile of 20% enriched uranium. It also dismantled for storage inside Iran most of its IR-1 centrifuges and all of its more advanced IR-2 centrifuges. As a consequence of these limits, Iran’s “breakout time” was extended from a month or two before the deal to about one year after the deal.

After year 10 of the deal, however, Iran was allowed to start replacing its IR-1 centrifuges at Natanz with more advanced models, which it was permitted to continue to research and develop during the first decade of the deal. As these more powerful advanced centrifuges were installed, breakout time would probably have shrunk to about a few months by year 15 of the deal.

As part of the deal, Iran also agreed to enhanced international inspections and monitoring of its nuclear facilities.

What has Iran done since President Trump withdrew the U.S. from the nuclear deal in 2018?

Since the U.S. withdrew from the nuclear deal, Iran has gradually exceeded the agreement’s limits. It has increased its stockpile of 5% enriched uranium; resumed producing 20% enriched uranium; initiated production of 60% enriched uranium, resumed enrichment at Fordow; and manufactured and installed advanced centrifuges at both Natanz and Fordow.

As a result of this growing stockpile of enriched uranium and the use of advanced centrifuges, Iran’s estimated breakout time has been reduced to a few weeks. So far, however, Iran has not decided to begin production of weapons-grade (90%) enriched uranium, even though it is technically capable of doing so.

Most likely, Iran is behaving cautiously because its leaders are concerned that producing weapons-grade uranium would trigger a strong international reaction, which could range from additional sanctions to military attack.

Gary Samore, Professor of the Practice of Politics and Crown Family Director of the Crown Center for Middle East Studies, Brandeis University