Courtesy of Lee Adler of the Wall Street Examiner

"Fewer people applied for unemployment benefits last week, a hopeful sign that the job market might be picking up," trumpeted the AP, in a news item picked up by news organizations across the US and the world. There’s just one minor problem. First time claims actually increased by 9,361. The AP, and everybody else, reports a fictitious number, the seasonally smoothed fantasy. They do that because they figure that readers are too stupid to compare this week’s performance with the same week in previous years to see if the economy is doing better or worse. I hold no such preconceived notion. If you are smart enough to be reading this report, then you are smart enough to be able to compare actual numbers, as opposed to the fake pablum spoon fed to you by the economics punditocracy.

Claims did indeed increase in the week ended October 29. The last week in October virtually always has an increase. But there is real, positive news in this. This week’s increase was the smallest for the last week of October since the raging bubble year of 2005, when claims actually fell by nearly 8,800. But in the recovery years of 2003 and 2004, claims rose by 17,000 and 25,700. So this year looks good by that standard. Furthermore, this year’s number is much better than last year’s increase of 30,170, and way better than the recession years of 2008 and 2009, when 50,200 and 21,970 filed claims. 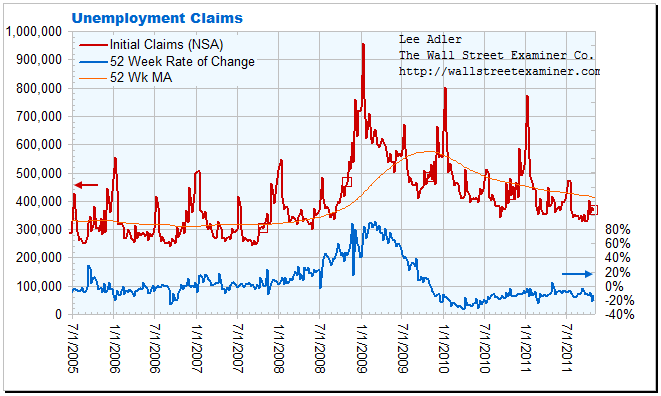 By any standard, last week’s increase in claims was a good number for bulls. Of course, it’s only a fraction of the story. It does not tell us how many people got jobs. It only tells us how many eligible workers lost their jobs.

Some analysts look at continued claims to get an idea of whether people got jobs. Continued claims fell by 16,000 in the week ended October 22. The problem with that number is that we don’t know how much of that was due to folks leaving the rolls because they found jobs, and how much was due to exhaustion of benefits. 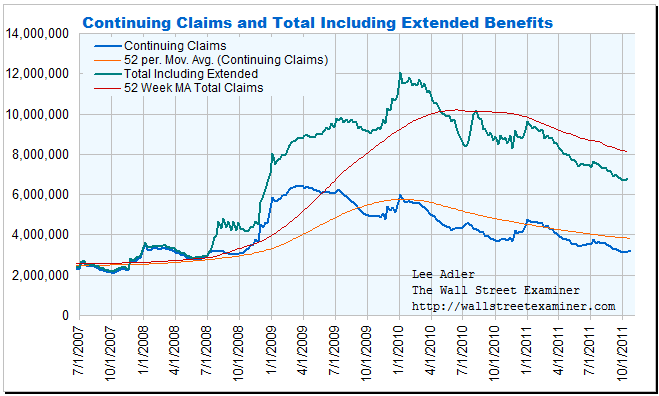 Wage withholding data, which is available daily, virtually in real time from the Treasury Department, suggests that the number of jobs overall is holding steady with little change year to year or month to month. That’s not good, considering that population and the real labor force are growing.

The government will massage the unemployment rate it reports tomorrow. It will reduce the size of the labor force arbitrarily by dropping those who have temporarily given up on looking for a job. Total nonfarm payrolls are another story. They’ll massage those numbers too, both through the seasonal adjustment, and the business birth-death adjustment. We will look at the actual, not seasonally adjusted numbers and compare them year to year to get an idea of the real trend.

The real wage withholding data, which I track in the weekly Professional Edition Treasury Report, and of which I will post an update later today, suggests that as of mid month when the BLS conducted its survey, there was a bump in real wage withholding to a gain of about 1% versus last year and last month. That’s pretty typical for October, so after the gummit gets done with its seasonal hocus pocus, the reported fictitious jobs number could be somewhere near flat. Depending on whose survey you look at, the consensus calls for an increase in payrolls of 90-95,000. Given the real wage withholding data, I suspect that the seasonally adjusted number might come in light of that. The actual number should show a gain of 100-150,000.

However, the gains evaporated in the second half of the month. Regardless of what the reported number for October is, the reality is that the withholding data deteriorated in the last two weeks. If this trend isn’t reversed, the November jobs number will come as a negative shock to the market.

Stay up to date with the machinations of the Fed, Treasury, Primary Dealers and foreign central banks in the US market, and get regular updates on the US housing market in the Wall Professional Edition, Money Liquidity, and Real Estate Package. Click this link to try WSE’s Professional Edition risk free for 30 days!