I know I'm doing my job correctly when we have down days and nobody is panicking.  Frankly, the only panic we have this week is from people who got nervous and covered AAPL too soon.  In fact, we just cashed out most of our AAPL long posiiton in our Long-Term Portfolio and flipped it to a higher-leverage, smaller and more speculative play in yesterday's morning Alert to Members (also tweeted).

Learning to take profits off the table is the 3rd hardest trading lesson we try to teach our Members.  The first two are PATIENCE and learning not to chase.  This AAPL trade is a great example of all 3 as we PATIENTLY scaled into a very large position as AAPL went down from our initial entry and now, still almost 20% below our initial entry ($585), we're taking profits off the table.

At the same time, I have to keep telling people who weren't in AAPL or are already in AAPL and didn't double down at $400 or simply aren't satisfied with their current AAPL gains – to NOT chase the stock when it's testing $500 at the top (maybe) of a 100-point run (25%) since early July.  25% is a lot.

We're also having a blast with our oil trades, with another good entry this morning at $107.50, that's already up .50 at $107 for a $500 per contract gain and, if it bounces back to $107.50 at the 9am NYMEX open – we'll short it again!!  They punched oil all the way up to $107.90 overnight on news of riots in Egypt but the cold reality is that they still have 148M barrels on fake order for September and they have to either cancel or roll them by Tuesday or all those barrels will actually be delivered to Cushing, OK next month, where they would increase our oil inventories by millions of barrels each week and crash the oil market.

We discussed long-term shorting of oil (with December 2015 hedges) in Friday's post, don't confuse that with our short-term shorting of the oil Futures (/CL), where it's more of a hit and run game.  As is proven from our fantastic winning streak playing for breaks below the 0.50 lines most of this month – the pressure is certainly down and we're fairly confident it's only a matter of time before we get a nice, 5% breakdown as trades begin to panic out of their FAKE positions before they have to accept delivery of REAL barrels:

Aside from the MASSIVE build-up of fake orders in the front 4 months (836,000 1,000 barrel contracts currently open!), which become the front 3 months on Tuesay, we have evidence from WMT and other retailers that the US consumer is already at their breaking point with oil over $105, let alone $107.  US sales for WMT fell 0.3% in Q2 and WMT has dropped guidance by 2.5% for Q3 on – the weak consumer. 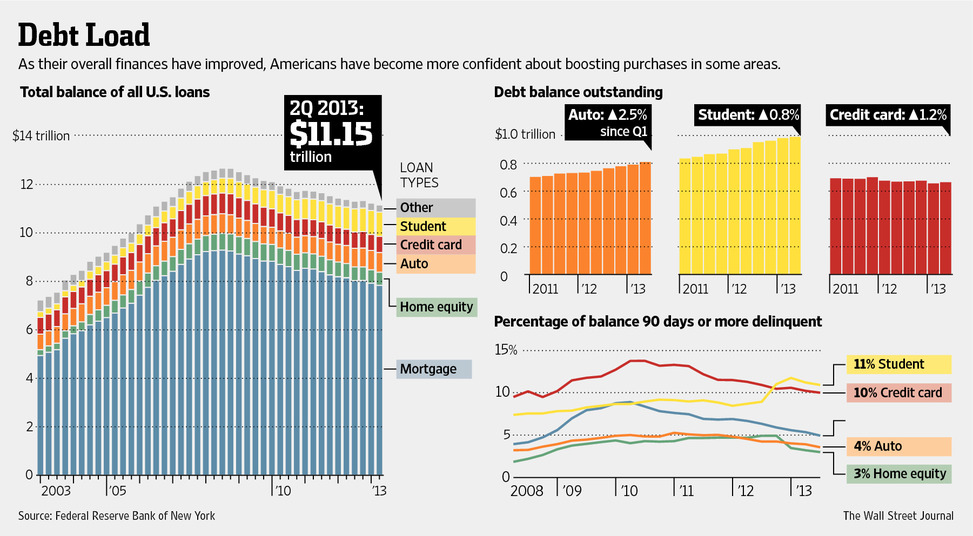 Not only are US consumers cutting back their discretionary spending, but they are plowing back into debt with Credit Card debt up 1.2% in Q2 vs Q1 and Auto Loans up 2.5% and not only are Student Loans up 0.8% for the quarter but now 11% of them have become delinquent – that's 11% of over $1Tn!

You can only fake a market rally for so long before someone actually has to buy all these pumped-up goods and services to justify the runaway valuations – especially the forward multiples, that are now based on some best-case, fantasy scenario that simply is not playing out on a global, or even a local scale.  So, if the consumers (70% of the US Economy) aren't opening up thier wallets and the Government (Sequestration, Debt Cieling) isn't spending more to fill in the Gap and Big Business isn't hiring and expanding – WHAT THE HELL ARE PEOPLE SO BULLISH ABOUT???

Big Chart – NYSE promising with the bounce off the -5% line but the Dow needs to get it back quickly (2 day rule) and we REALLY can't blow the 50 dma on the SPY – that would be BAD.

Oil Futures/Ldm – I spend a couple of hours in Vegas with multiple screeens and live platforms, etc showing people the basics of Futures but sure, I'll sum it up for you in 30 seconds:

Assuming we're FUNDAMENTALLY comfortable that one direction is better than another, we find a zone that oil trades in and then, if we're short, we use support/resistance lines (usually $1 or .50 lines) as a BACKSTOP for our entry.  The next trick is – NOT LOSING MONEY – if your backstop is violated, GET OUT!

There are LOTS of factors in play at any given time:  The overall direction of the markets, the movement of the Dollar, other commodities, inventory reports, global news (Egypt at the moment) and, of course, the barrel count at the NYMEX.  Even the time of day is a factor as oil tends to trade up into the 9am NYMEX open and the 2:35 close and the 10:30 inventory reports on Weds and Thurs and, of course, into Friday's close, as that sets the prices consumers pay over the weekend.  Sometimes things are in our favor and sometimes they are not – when they are not – DON'T TRADE!  When the lines aren't holding – DON'T TRADE!

Back to $106 on Weds AM and clearly we held that line so bullish indicator and then there was the silly spike into inventories, which we caught for a short and then the equally silly drop to $105.60, where we took the money and ran at $105.75.  See, nothing mysterious here, we just stick to our discipline.

That's the simple overview – there's scaling strategies on top of that and, of course you have to manage your losses, which means – if you lose $100, your focus should be on simply making $100 back – not "going for it".  As you can see, there are TONS of entry opportunties – not every one has to be a big winner.  We just like to tread water and stay about even on most of our entries and, once in a while, we get a nice $250 or $500 or $1,000 wheeeeee!  and we're happy.

USO/Invest – Yes, the nature of the fund is they are constantly buying NYMEX futures (part of that fake demand) that they never intend to have delivered and so, every month, they have to roll over the next month (they have a 3-month roll cycle) and create more fake demand going forward.  So the fund loses, NORMALLY, the .15-30 friction cost.

At the NYMEX, you don't have to SELL your contract, you are allowed to adjust it by simply paying the difference between the two months as a rolling fee.  So, when the Sept contact is cheaper than the Oct contract (this rarely happens), as it was yesterday, the traders (and USO) actually COLLECT money for pushing their call contracts forward another month.  Yes, it's completely ridiculous, but it's true…

The reason it happens is that the fear of Egypt now drives people to speculate something will blow up over the weekend and prices of Sept contracts will spike.  Into October, there is less urgency and, in longer months, Egypt is factored out and prices get even cheaper.  That's why Dec 2015 oil is $88 and Sept 2013 is $107.33 and, as I noted last week, you can play the same game and buy those Dec contracts and short front-months with impunity because, ultimately, you get to buy Dec 2015 barrels for $88 to cover the eventual pay-off of the short calls you have to roll (assuming oil kept going up and never down).

I love trading the oil pit.  As Phil says, it's very dangerous and I've had my share of losses but playing Phil's lines along with the strategies he's teaching has turned my trading around completely.  When I first got here, he said "practice, practice, practice" and that was the key to my success using his techniques until it was almost automatic for me.

Learning not to overplay is another very valuable lesson Phil taught me.

Phil/ABX – Much more relaxing.  Thanks for the thoughtful response.  It seems so obvious when you describe things :).