Wow, what a fun day yesterday was!

In fact, that's the action we saw back on 2/28, when I was warning people to get to cash and, in fact, I tweeted out a similar comment (with the same video link) and our trade idea for playing the next 45 days was:

We actually flipped long on the Russell during our Live Trading Webcast at 1pm yesterday, catching it pretty much on the button and I showed people, LIVE, how to make hundreds of dollars in just 15 minutes trading the Futures (replay available here).

We're still expecting a much bigger drop, probably not until after the weekend though, as Ukraine tensions are keeping oil high.  Rather than play the volatile Futures over the weekend, we have SCO and USO plays set up for our Members to take advantage of the potential correction.  Today though, we can still have fun with the Futures (stop at $104.75 at the moment) into inventories at 10:30.

We're past the weak bounce lines on our indexes and now we're looking for the strong bounce lines to be taken and held at Dow 16,240, S&P 1,850, Nasdaq 4,150, NYSE 10,430 and Russell 1,145 (noted in yesteray's post) but none of it matters until the Fed's Beige Book this afternoon at 2pm and then that doesn't matter either as we have a holiday weekend and there's no sense in betting on that – better to have a nice Easter and see what happens next week – that's why we picked the April time-frame on our TZA hedges (which can still make another 250% if TZA stays over $17 through tomorrow!). So let's all relax and have a happy Easter with our sidelined CASH!!! and let's reflect, in this holy season, on the new study done by Princeton and Northwestern Universities, which has concluded that "The US government does not represent the interests of the majority of the country's citizens, but is instead ruled by those of the rich and powerful."  I know – duh, but it's interesting to see it in an official study, isn't it? 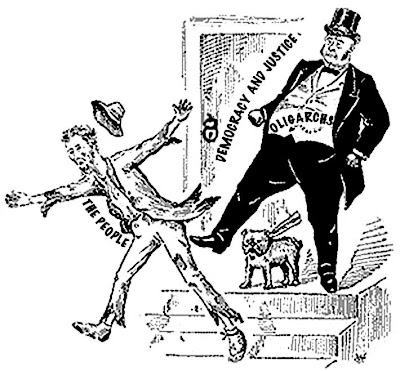 No wonder the Kochs are working so hard to defund education – if it's going to uncover this sort of thing:

After sifting through nearly 1,800 US policies enacted in that period and comparing them to the expressed preferences of average Americans (50th percentile of income), affluent Americans (90th percentile) and large special interests groups, researchers concluded that the United States is dominated by its economic elite.

Researchers concluded that US government policies rarely align with the the preferences of the majority of Americans, but do favour special interests and lobbying organizations: "When a majority of citizens disagrees with economic elites and/or with organized interests, they generally lose. Moreover, because of the strong status quo bias built into the US political system, even when fairly large majorities of Americans favour policy change, they generally do not get it."

Ask yourself this weekend, WWJD?

/CL / Burrben – Looks like TOS has switched to the June contract for their front month. Trading at 103.27 now. Amazingly enough, the Dow is only about 1-2% from its highs. Could be forming a head and shoulder though. Nasdaq and Russell seem to be in a bearish price channel. Nasdaq would need to break over 4200 to escape it seems. And both now have their 50 DMA as overhead resistance.

Thanks for the updates on multiple fronts Phil – appreciated for us when the "man" gets in the way of the really interesting trading learning…….but we have to fund our habits, eh?

The Korean ferryboat disaster will go down as the most unnecessary, incompetent slaughter of innocents in maritime history.  The boat turned on it's side, but sank very slowly.  It had a full complement of life rafts — not a single one of which was deployed by an untrained crew which, I believe, had never had a lifeboat drill.  Instead, students were told to jump into 54 degree F water in the early hours of Wednesday.  Average survival time in that water temperature would unlikely exceed four hours.  The news reports 290 "still missing."  They are dead by now, except for any of them that may have been trapped inside the boat without water immersion  — very unlikely, now that the boat has settled. The captain and at least a dozen crew members escaped unharmed.  Most of the hull was above water for many hours.  By way of comparison, the Costa Concordia disaster took 32 lives — another cowardly captain.  If the ferryboat were Japanese, the captain would likely commit sepukku.  Disgraceful.

StJean – Maybe, I don't use TOS.  I am still trading the May on IB.  They do have a liquidation policy, and it's quite unclear.  Regardless I'm keeping a May contract in my paper account until expiry so I can see what they do.

I'm also trying a few "automated" ideas.  For example setting a conditional parameter to trigger a sell order and then also transmit a hidden trailing stop order as well.  So I did this when /CL was around 104.05

This is just for kicks using my paper account. 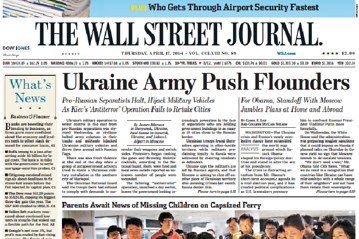 Oil just failed $103 – let's see how this goes.  NYMEX closed tomorrow so after 2:35, they have just two days left next week to roll the rest of their barrels, still 118M at yesterday's close and figure they will end up with 18,000 contracts (1,000 barrels per) so they have 100M barrels to roll in 3 days – very doable and, as you can see, they've already dropped 600M into the next 3 months and hope springs eternal for "Summer Driving Season".  In short – we should probably take advantage of any good drop and cash out of our oil shorts – as it just didn't break out way this month.

Asia was pretty flat, except India, which popped 1.3%

It's one of those days when the Dollar is diving to mask market weakness and already it's down to 79.65.  That's not nice for /NKD, which has already slipped from 14,500 to 14,420 and the Nikkei will be making a very unhealthy-looking chart if it fails 14,000 again.

Lots and lots of earnings today (which will be the big story for the rest of the month) and Philly Fed at 10.

GOOG bounced back a bit after giving good CC:

Letterman getting political in his final year:

Phil, Are you suggesting closing the May $18 puts on USO win or loose today?

Phil – does that go for SCO as well?

DXD / Phil – Bot the May Bull Call spread on DXD yesterday at .80 per your posting.  Was thinking about letting it go today at a small loss and Maybe reapplying the position later at lower strikes since the DOW is STILL on a tear and shows no signs of slowing thanks to Fed doves and bottomless punch bowl.  What do you think?

SNDK / Burrben – Just read your post re SNDK.  Much appreciated.  Thanks for the input!