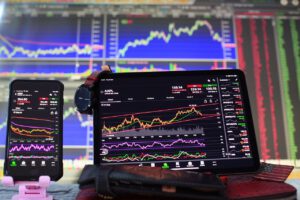 Whitney Tilson’s email to investors discussing the Pivot conference in Miami; back to Earth or temporary setback? Revisiting the FANGAM stocks; are activist short sellers misunderstood?

1) As you read this, I’m on a flight to Miami for the first-ever Pivot conference, named after the podcast I enjoy that’s hosted by two of my favorite commentators, NYU marketing professor Scott Galloway and New York Times tech columnist Kara Swisher.

I’m looking forward to hearing from them as well as a range of great speakers, including:

I’ll be listening carefully and sharing with you the most interesting things I hear!

2) Speaking of Professor Aswath Damodaran, he has been valuing tech stocks for years… including, famously and accurately, Tesla (NASDAQ:TSLA), since 2013 (see his latest post on the company here: Tesla’s Trillion Dollar Moment: A Valuation Revisit!).

So I read his most recent post with great interest because it includes three of our core holdings, Amazon (NASDAQ:AMZN), Meta Platforms (NASDAQ:FB), and Alphabet (NASDAQ:GOOGL), in our flagship newsletters, Empire Stock Investor and Empire Investment Report: Back to Earth or Temporary Setback? Revisiting the FANGAM Stocks (you can watch his accompanying 29-minute video here). Excerpt:

It has been a rocky year so far, in 2022, with worries about inflation competing with hopes about recovery for the market’s attention. In the midst of all the action, to no one’s surprise, have been six stocks (Facebook, Amazon, Netflix (NASDAQ:NFLX), Google, Apple (NASDAQ:AAPL), and Microsoft (NASDAQ:MSFT), or FANGAM) that have largely driven U.S. equities for the last decade, roiling the market with their most recent earnings reports. Netflix and Facebook saw drops of 20% or more in market capitalization, following negative earnings reports, but Amazon and Google beat market expectations. In this post, I will be valuing each of these companies, both to assess whether to invest in them individually, and to examine whether there are lessons for the market in their price entrails…

In the eighteen months since I valued these companies, much has happened, to the economy, to U.S. equities collectively, and to these six companies, in specific. In the graph below, I report on the collective market capitalization of U.S. equities, broken down into three groupings, the FANGAM stocks, all other U.S. tech companies and the rest of the U.S. equity market, from August 31, 2020 to February 9, 2022: 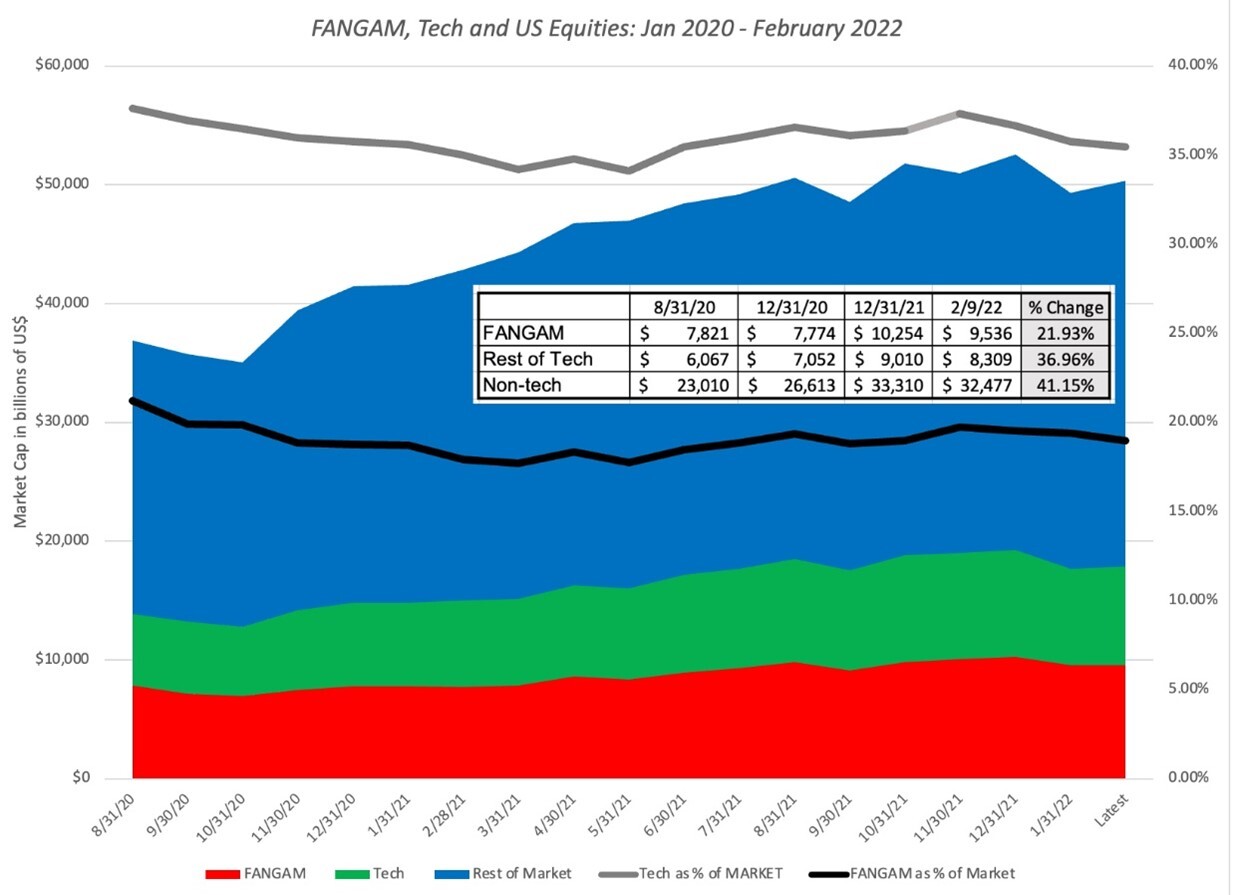 In the trading game, where pricing is driven by mood and momentum, earnings reports and news stories are scanned for incremental news, information that ultimately will have little effect on value, but can move prices substantially. That explains the fixation with earnings per share expectations, and why seemingly trivial surprises, where a company beats or falls short of earnings expectations by a few cents can cause the market capitalization of a company to increase or decrease significantly. If you have been reading my posts, it should come as no surprise to you that I believe in intrinsic value, but I also believe that intrinsic value is driven by narrative. To me, the value effect of earnings reports and news stories comes from how they change (or don’t change) the core narratives for companies. In keeping with that belief, I revisited my narratives for the FANGAM stocks, with the intent of revising these narratives, based upon what we have learned about these companies in the last two years… 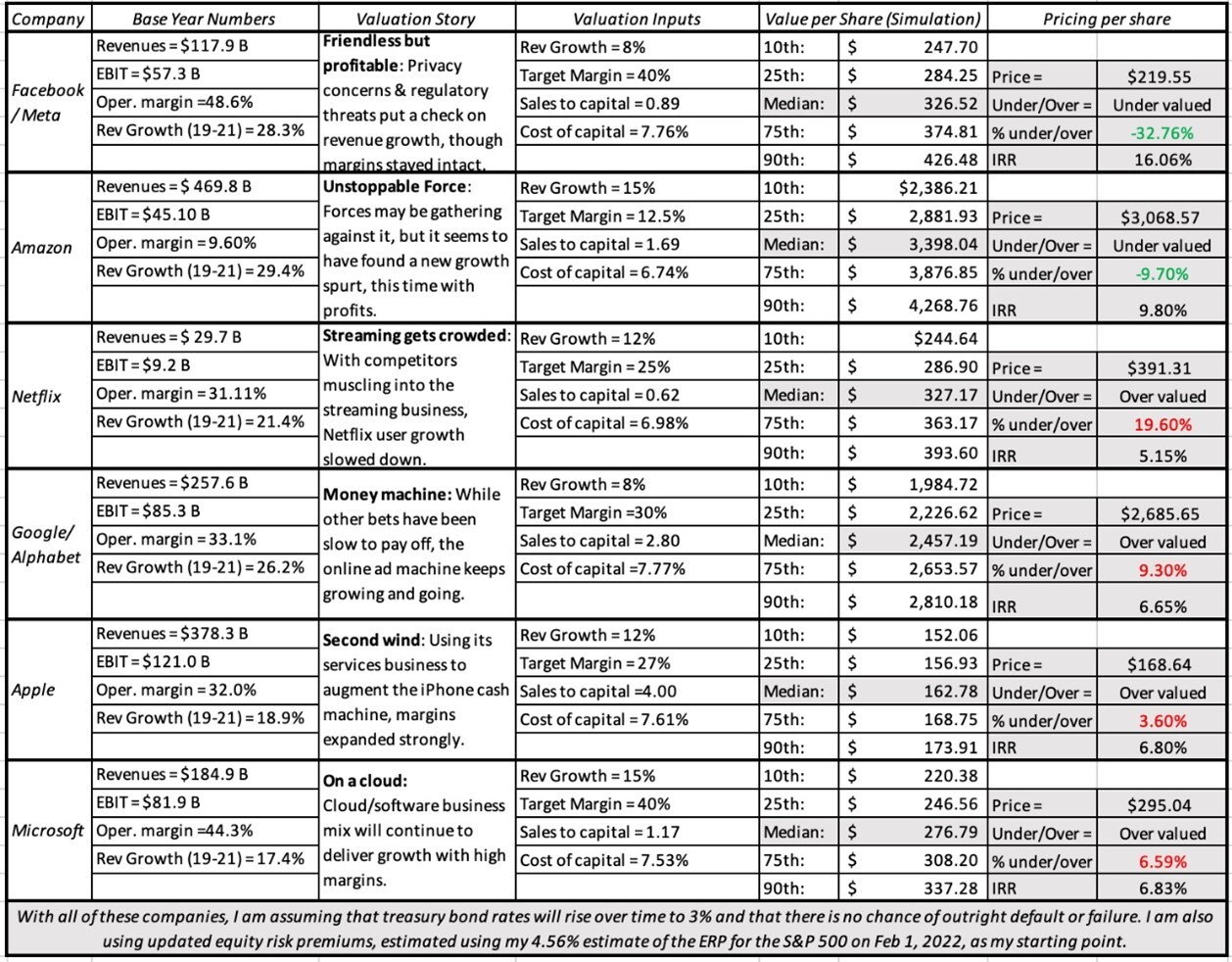 At the risk of repeating some of what I have said before, here is what the valuations tell me about these companies, as investments.

3) In Wednesday’s e-mail, I shared this Bloomberg article, Vast DOJ Probe Looks at Almost 30 Short-Selling Firms and Allies, and concluded:

If regulators have reason to believe that a particular investor (whether long or short) has violated securities laws, then they certainly should investigate.

But that’s not what this looks like… Instead, it appears to be a fishing expedition that will be costly and have a chilling effect on short sellers, especially those with the courage to speak publicly about their findings. This is exactly the opposite of what our frothy, fraud- and hype-filled markets need.

Following up on this, I wanted to share this insightful article by Michelle Celarier in Saturday’s New York Times, Are Activist Short Sellers Misunderstood? Excerpt:

Short sellers aren’t loved, nor well understood, by the general public. They became the target of angry retail investors during the GameStop (NYSE:GME) trading frenzy early last year, blamed for driving GameStop’s stock into the ground before a short squeeze – in which the pace of buying forces short sellers to buy stock to cover their positions – catapulted it to the sky. The fracas sparked investigations into GameStop short sellers’ trading, but they have gone far beyond the wild events of January 2021. An investigation of short sellers by the SEC and the Department of Justice, first reported by Bloomberg, has ensnared at least 25 individuals and firms – most of them activist short sellers – who have received subpoenas and search warrants, an individual familiar with the investigation said.

I think Bill Ackman’s take on this is exactly right: 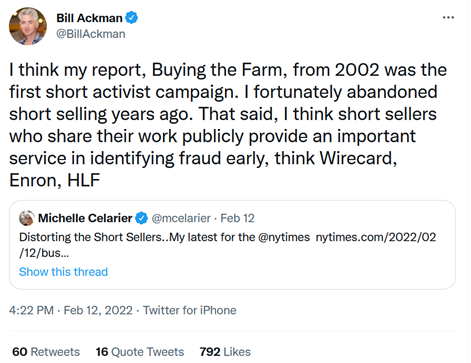 By the way, this report is total garbage, bought and paid for by enemies of short sellers. Here’s Celarier in the NYT again:

The idea that short activists need to be reined in has largely been driven by Joshua Mitts. An associate professor at Columbia Law School who also has a consultancy business, he claimed in a 2018 research paper, “Short and Distort,” that activist stock sellers who wrote under pseudonyms were deceiving the market to make a quick buck, and that the stocks they shorted bounced back a few days later. 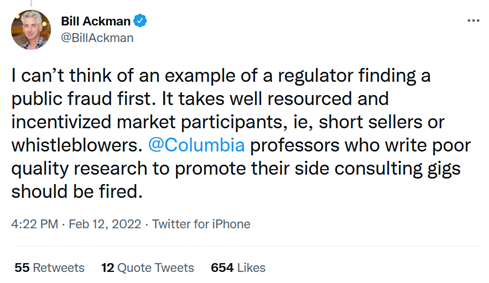 P.S. I welcome your feedback at WTDfeedback@empirefinancialresearch.com.