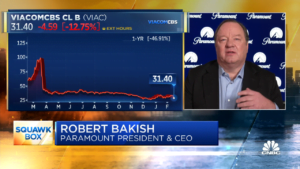 Following is the unofficial transcript of a CNBC interview with Paramount President and CEO Bob Bakish on CNBC’s “Squawk Box” (M-F 6AM – 9AM ET) today, Wednesday, February 16th. Following is a link to video on CNBC.com:

ANDREW ROSS SORKIN: Welcome back to “Squawk Box.” Big news in media land, ViacomCBS Inc (NASDAQ:VIACA) announcing a rebrand. From now on, it’s going to be known as Paramount and it comes with the new stock ticker set to make its debut tomorrow. Last night, the company reported a mixed fourth quarter results, but 56 million total streaming subscribers, that’s about 3 million more than forecast. Joining us right now first on “Squawk Box” is Robert Bakish. He’s the President and CEO of Paramount. Bob, it’s great to see you this morning. I want to talk about the, the quarter and also the future of this company. We should mention the stock down on this news about 12%, 13% in the pre-market this morning, but let’s, let’s start from the beginning and talk about this move to change the name and really restructure the company focused around paramount.

BOB BAKISH: Yeah, well, great to be here this morning. So, look, we’re super excited about what’s going on at the company we now call Paramount, really three things behind the Paramount name change. One is when you look at the data, the recognition of Paramount particularly globally, the name is far higher than Viacom or CBS as is the attribution of high quality. Second point being, you know, Viacom CBS continued to say we were two companies, we’re not two companies, we’re one company. Paramount allows us to have a unified umbrella brand. And then lastly, when you deploy money against your trade name, you’d really like it to accrue to your flagship products and so now whenever we talk about Paramount, we had association with Paramount+, Paramount Pictures and vice versa. So for those reasons, we really thought the time is now to call the company Paramount. And I would point out that it also stands for the best which is something we obviously aspire to be.

SORKIN: Let’s talk about the earnings because I think, you know, this company is trying and I don’t know I think to transform itself into being considered a growth-oriented company rather than maybe a value play but you’re seeing that a little bit in the results here, which is that the good news is that you have more subscribers and focus on streaming. The bad news is the profits have come down and there’s margin compression given the investment you’re making in all of this.

BAKISH: Yeah, so look, we had an investor event last year and introduced the world to Paramount+, our flagship streaming service, and we said we would invest in it, asset value creation opportunity. We did exactly what we said the only difference is, it’s working far better than even we thought. You look at the current quarter or the fourth quarter I’m sorry that we just reported, Paramount+ and our total pay streaming portfolio added 9.4 million subs, as you pointed out, that was a materially higher number than expectations. Simultaneously Pluto TV, our free ad supported streaming television service added 10 million MAUs also a far higher number than anyone was looking for. And by the way, that is the number one fast service in the United States. And by the numbers I’ve seen, we’re not only number one, we increased our leadership position over the competition in the fourth quarter. So, our streaming investments are already paying off materially and simultaneously our linear portfolio is doing well and we just had to number one films at the box office. So this company has extraordinary momentum. We’re executing exactly what we said and frankly, we’re delivering.

BAKISH: Look, I think you have to look at the facts. The facts are we had the fastest growing streaming service in the fourth quarter. The facts are that we have in Paramount+ the fastest growing brand in the United States, not just in streaming but in any category. The facts are we have the number one fast service in the US which is rapidly expanding globally. The facts are we have the top four shows in television between “FBI,” CBS’ “NCIS,” Paramount Network’s “Yellowstone,” and we have the number one shows across a whole range of categories and the facts are we just had two number one films at the box office. So yeah, people like to look at metrics, but this company is delivering in streaming. It’s delivering in traditional media and that’s because the content that we make truly resonates and we have a very broad content offering including on streaming, you know, sports looks like the NFL which is doing great, by the way, news and obviously all kinds of entertainment. So I say look at the facts. This company is delivering and has a very exciting road ahead of it including all around the world.

SORKIN: Bob, should we look at what you said yesterday as a shift though in strategy. Rich Greenfield has long talked about the idea of either being a streamer or an arms dealer to the streamers. There was a point at which and we had conversation about this I think two years ago where you were trying to be both. Are you now really focused, really more on the streaming side of this?

BAKISH: Yeah, there’s no question that we’ve pointed our content creation assets at our in house streaming properties, notably Paramount+, we’re absolutely doing that. We still have a content licensing business fulfilling some deals we put in place prior to that, but we’re definitely putting our assets against our own streaming assets because we see an extraordinary value creation opportunity and we see companies that have established successful streaming platforms as getting that value recognition. So that is what we are focused on. And again, you look at the fourth quarter, we’re feeling very good about the progress we made. And if you watched the investor event yesterday and you see the content coming including this quarter, including through ’22, we have an extraordinary lineup coming and nobody is debating anymore that we’re not going to grow very strongly in streaming, which is a big change from the past. So, we’re feeling very good about that.

BECKY QUICK: Hey, Bob, it’s not an easy road to get to, you know, Paramount+ being everything because all the other deals you have. I know that it’s 2024 before it’s going to be completely exclusive that once movies go from the big screen, maybe they will go straight to Paramount+ once they go through that. What does it look like? Is it, is it a straight shot up from here to there or how do you kind of maneuver along the way?

BAKISH: Well, we see, we obviously had very material subscriber growth in 2021. We see very material growth in 2022. You can do the math, we said 65 to 75 million subs by 2024. When we met last year, we raised that number to 100 million and we did that because we’re going across the high end of the 75 million in 2022. So, we’ll have very strong subscriber growth in ’22 and we like what we see for ‘23 and ’24 as we track to that 100 million number and it’s because it’s fundamentally being driven by content, but it’s also being driven by unlocking our traditional assets whether that’s for promotion and fandom creation and, and franchise spin off or a distribution partnerships like what we’ve done around the world, including with Sky and the Canal+ deal we announced last week. So again, feeling very good about our momentum and the path to a very significant streaming business.

SORKIN: Bob, you are doing a combination as so many are now combining Paramount+ with Showtime and of course full disclosure, I co-created billions which runs on Showtime. Speak to speak to the strategy behind doing that and why you haven’t merged them fully. I imagine the answer has to do with the cash flows that are still coming off the legacy traditional subscribers to Showtime.

BAKISH: I believe we have a strategy which optimizes Showtime’s use in the context of streaming today and it’s a bifurcated strategy. In the United States where Showtime has very strong brand recognition and real traction with consumers, particularly on the coastal side with edgy programming and you see those results in full year 2021 and in the fourth quarter where Showtime had very nice subscriber growth including in streaming and then simultaneously outside the US where the brand recognition is not as great we’re integrating the product into Paramount+ and we’ve seen that be a great driver.

SORKIN: Bob, we got to run but to the extent that there’s always been speculation you may try to sell yourself and that you’re trying to grow and grow quickly, what do you tell investors?

BAKISH: We believe that our organic plan particularly focused on streaming is the best road to value creation. However, we’re sure, we’re stewards of shareholders and, you know, we’ll always look at other opportunities that they emerge, but again, we’re feeling very good about our organic plan.

SORKIN: Bob Bakish, great to see you. I hope we’re getting to do this all in person very, very soon.

SORKIN: Appreciate it, talk to you soon.