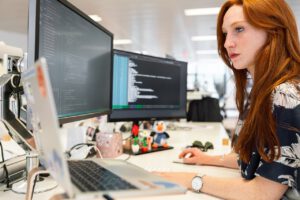 Google – Alphabet Inc (NASDAQ:GOOGL) – has mandated its employees in specific U.S., U.K., and Asia Pacific offices to go back about three days a week as of April 4. With this, the Silicon Valley giant is taking its first steps to end its Covid-triggered remote work policies.

According to Reuters, Google is making its transition to hybrid work as the decline in COVID-19 cases is facilitating the gradual workers’ return to premises.

An email sent to workers and disclosed by the news agency read: “Advances in prevention and treatment, the steady decline in cases we continue to see and the improved safety measures we have implemented … now mean we can officially begin the transition to the hybrid workweek.”

Google’s move follows that of other tech giants that have urged workers to return to office amid dropping Covid cases. Although remote work remains voluntary via permanent company policies among other firms, the internet giant, in particular, has taken a more forceful approach.

“Google expects most employees will be in offices about three days a week, with some variance by team and role,” Reuters reports.

John Casey, Google’s vice president of global benefits, wrote in an email that all employees required to return to office must be fully vaccinated or show an approved exemption. Those who have not received the shot and are unable to show an exemption will have the opportunity to seek one or apply for permanent remote work.

According to Casey, fully-vaccinated employees will not have to wear masks in Bay Area premises.

“Google declined to specify the other locations returning to normal on April 4, pending formal announcements to workers at those sites.”

Casey revealed that the internet company has approved about 14,000 workers worldwide to move to a different location or work remotely to the full —about 15% of remote work applicants have seen their requests turned down.

Google is part of the Entrepreneur Index, which tracks 60 of the largest publicly traded companies managed by their founders or their founders’ families.