The Commodity Markets Have Been Wild 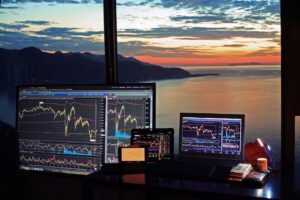 In his Daily Market Notes report to investors, while commenting on the commodity markets, Louis Navellier wrote:

Our bounce today is due largely to a very strong bounce in Asia.  China, as you know, is starting to shut down big sections of their economy.

The electronics section where they make Apple products is shut down, as well as a lot of automotive plants in Shanghai. Volkswagen and other foreign automakers have had to shut their plants. Tesla just had to shut down a Shanghai plant. Covid is really not a big problem in China, but if you get a few cases, they just shut everything down.

China is struggling with its own debt problems from Evergrande, slowing economic growth, and new Covid-19 lockdowns, but their government pledged to get their economy going. China is also trying to distance incrementally itself from Russia.

The other reason the market is firming up is the perception that Russia and Ukraine might come to an agreement on how to split up certain parts of Ukraine and have a ceasefire.

The commodity markets have been wild this week as futures markets for currencies, crude oil, corn, wheat and many metal prices have been oscillating.

The market for Nickel remains erratic and plunged 5% limit down on Wednesday on the London Metal Exchange (LME).  Unfortunately, the LME executed some nickel trades below the 5% limit, so trading had to be stopped again.  Since Russia is a major nickel producer and the new most efficient electric vehicle (EV) batteries are now up to 90% nickel, I expect other EV manufacturers will follow Tesla and raise EV prices.

Interestingly, new vehicles sales ran at a 14.5 million pace in February, down from a 15.5 million annual pace in January, but sales still rose in February due to higher prices. The Natural Retail Federation on Tuesday forecasted 6% to 8% in 2022, down from 14% in 2021, so essentially retail sales are expected to follow the underlying inflation rate as stagflation persists.

The Federal Open Market Committee (FOMC) statement on Wednesday at 2:00 pm EST, plus Fed Chairman Jerome Powell’s press conference is expected to be dovish and trigger a decisive market rally, despite a 0.25% increase in the Federal Funds’ rate.  The yield differential between the 2-year Treasury note and 10-year Treasury bond is now too close for comfort and likely will cause the Fed to hesitate on further interest rate hikes.

Under no circumstances does the Fed want to invert the yield curve, since it would cause undue stress on the banks that the Fed regulates.  So essentially, I expect that the Fed will signal that it will be more cautious with future interest rate increases, which should trigger a positive stock market reaction.

The main message I have for you folks is a lot of the uncertainty in the world is starting to diminish. Obviously, things could go wrong. Russia apparently defaulted. It’s not a default till you’re 30 days late, but apparently, the payment didn’t show up. So we’ll see if they try to make a partial payment within the next 30 days.

Stocks remain an oasis and are much better in the second half of March than the first half as documented by Bespoke Investment Group. Earnings are still working and they’re coming out still hot and heavy for us. 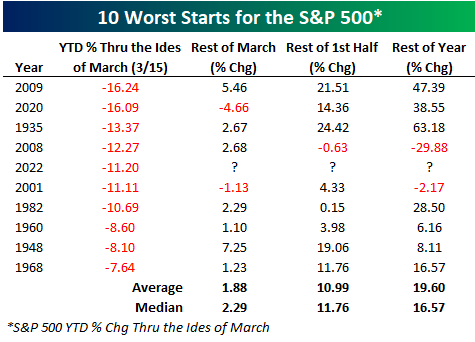 Stocks are still the best inflation hedge, and the companies that can raise their prices are going to prosper, whether it’s energy companies, fertilizer companies, retailers’ pricing power, food companies, and semis.

The other thing is the markets are more optimistic in the spring as the weather gets better. We all cheer up. It’s a human nature thing. So enjoy the next couple of weeks. I expect it to be stunning.

Residents of Greece would have had to pay approximately 6% of their average monthly wage for a full tank of gas this past Monday due to the price hike connected to Russia’s continued invasion of Ukraine. This is the highest figure among all OECD countries. The U.S. comes in last with around 1% of the average monthly wage share needed for a full refueling, despite seeing record highs of more than $4 per gallon last week. Source: Statista. See the full story here.