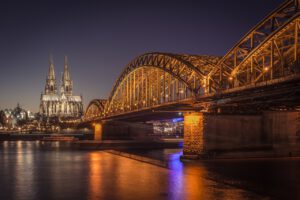 Germany is reevaluating its reliance on Russian gas and has begun to look for energy partners elsewhere. Economics Minister Robert Habeck has traveled to the Gulf States of Qatar and the United Arab Emirates to negotiate a long-term energy partnership and minimize the impact of a possible gas exports ban by Moscow.

As reported by The Guardian, Habeck’s trip is part of an initiative to reduce Germany’s dependency on Russian gas. After talks with the Emir of Qatar, the Economics Minister said a long-term energy partnership had been sealed.

Habeck led a group of top German companies interested in doing business with Qatar, despite open questions about democracy and human rights. After visiting Qatar, the German delegation traveled on to the United Arab Emirates for talks on securing green hydrogen produced with renewable energy.

Habeck said, “It is great that I can say it was firmly agreed to enter into a long-term energy partnership — a cooperation. The companies that are now involved in this journey will enter into contract negotiations with the Qatari side.” He gave no detailed figures on planned imports from Qatar.”

According to The Guardian, the deal is a long-term solution and will do little to slow the current flow of European money into Russian coffers, estimated to be worth $285 million a day for oil alone.

Melinda Crane, DW chief political correspondent, said that the delegation’s trip was not about “one-stop shopping,” but about a path with many milestones as Robert Habeck put it.

Crane reports that the German minister ended up getting more than he wanted in Qatar —a package deal that could help Germany not only deal with its short-term problem of weaning itself off Russian natural gas by diversifying its sources.

“That means not relying on any one source, but on a number of different ones, but also meeting its long-term goal of transforming its energy system to become climate neutral.”

Russia has until now provided 40% of Germany’s gas imports, and concern about the impact of a cutback in that supply, both for citizens and for industry, is one reason why Germany has refused to go along so far with suggestions for an import embargo on Russian gas.

Habeck says this long-term energy partnership with Qatar is a milestone toward what he calls “Putin-free energy.” It would focus both on deliveries in the short term of liquefied natural gas and developing renewable energy projects that would create a reliable supply of green hydrogen.