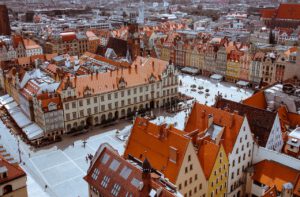 Ukrainian Pilots “Steal” 28 MiG-29 Fighters From Poland; It’s a Logical Followup To Rejected Polish Deal to Fly Its Planes to U.S. Base

WASHINGTON, D.C. (March 22, 2022) – Ukrainian pilots have reportedly stolen from Poland the same number of MiG-29 fighter planes which the Poles had previously agreed to turn over to the U.S. to be flown to Ukraine – in return for a similar number of used jets with “corresponding capabilities” which the U.S. would have in return turned over to Poland – to help fight off increasingly damaging Russian air strikes.

Warsaw declined to explain how these 28 planes, which apparently were already sitting on the tarmac fully refueled and ready to fly, could have been stolen and taken off from a restricted airbase. The U.S., which likewise claimed to know nothing about what reportedly happened, said it would nevertheless go ahead with its earlier announced intentions to promptly provide Poland with equivalent fighter aircraft to make up for this major loss of its firepower.

Indeed, both countries seemed pleased that the end result – providing the beleaguered Ukrainians with substantially increased protection in the skies with its own pilots, and seemingly without the direct cooperation of either government – thereby achieving indirectly the original plan which was to have Poland provide the planes, but to avoid a direct hand off which would likely antagonize Russia.

This way both countries can at least claim not to have engaged in directly provocative actions against Russia – i.e., Poland did not fly its MIGs into Ukraine, and no fighter planes from the U.S. will be flying sorties against Russian aircraft – while achieving the result both were under increasing pressure to cause, and which Poland in fact had formally proposed.

Several experts claimed that these events could not have occurred without the collusion of Poland, and probably also of the U.S., but agreed that there was at least plausible deniability.

If the Russians can claim that they are hitting only military targets, and that the aim of their massive and destruction invasion is simply to fight Nazism, Poland can even more plausibly maintain that it was simply careless in leaving 28 fighter jets lying around just waiting to be stolen, and the U.S. with even greater plausibility can maintain that providing more planes to a NATO country in Russia’s shadow is certainly not by itself an act of war.

Of course, none of the above has actually occurred – or at least, not yet – but it suggests that there may be ways around the current stalemate of how to provide the beleaguered Ukrainians with some air protection without direct provocation, claims public interest law professor John Banzhaf.

Every day, as more Ukrainians, including innocent women and children, are killed or maimed by Russian bombing which the U.S. presumably could deter if not prevent, it becomes more and more difficult for the U.S. to refuse to provide – even indirectly – any air support, in what some are calling the beginning of World War III, and others are comparing to the reluctance of countries to stand up to Hitler and his military actions to capture more territory, the professor says.

He notes that “where there’s a will there’s a way,” so that the President can always find a way to help Ukraine protect it’s own skies if he has the will to do so.

He also recalls the motto common among attorneys of “form over substance.” This means that it is often possible to accomplish a goal (the substance) if one can find a method (form) which plausibly achieves the desired end result, even if the method itself seems indirect, roundabout, or even implausible.

So in addition to using back channels to let the Ukrainians know that it might not be too difficult for its pilots to take some MiGs from Poland without serious opposition, and assuring Poland that any losses would quickly be replaced, the U.S. might consider other alternative outside-the-box approaches such as transfers of planes through several countries, secretly engaging international arms brokers, etc., says Banzhaf.