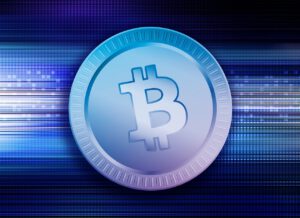 Despite Bitcoin’s appeal, several large investment firms are skeptical about investing in digital assets. However, more innovative means are now used to offer indirect exposure to the dominant cryptocurrency.

Bitcoin has come a long way from just being a peer-to-peer electronic cash system put forward by its pseudonymous founder Satoshi Nakamoto. Recent evidence suggests a growing interest and desire among everyday individuals to invest in cryptocurrency. This interest stems from the prospects of enormous returns that the sector creates compared to investing in stocks which was the norm before digital assets.

Recent data from Grayscale Investment suggests that more Americans are warming up to investing in Bitcoin. Roughly 13% of the American populace own BTC, with 55% of them investing in 2021. Furthermore, according to reports, Americans have become increasingly interested in having Bitcoin in their life insurance.

Interestingly, the clamor for Bitcoin exposure has reached large corporations. Several renowned companies have accepted the growing importance of BTC and have made moves to invest in it. However, there is an inherent hesitance in their efforts due to several issues.

Despite their growing desire to invest directly in Bitcoin, large corporations are reluctant to do so due to existing issues in the space. The first and most challenging is the issue of government regulation. Recently, SEC Chair Gary Gensler, called the crypto market the wild, wild west due to its volatility.

Further, the volatility of price swings poses an unusual challenge to large firms. Just as they can make astronomical gains on investments, they can face significant losses in a moment’s notice. This makes a Bitcoin investment risky, hence the cold feet.

Alongside the SEC’s effort to regulate the industry, several politicians, including the congressional Blockchain caucus, have urged Congress to create a regulatory framework for the space. The US Congress, on its part, has taken steps with several hearings taking place, but is yet to create laws that fully govern the industry.

Secondly, there is the issue of hacks, theft, and exploitation among the crypto space. According to a Chainalysis report, the amount of funds stolen from DeFi platforms increased by 1,330% in 2021 when compared to that of 2020.

Thirdly, the procedures involved in investing in Bitcoin are usually not as straightforward as traditional investments in stocks. The aforementioned risks associated with Bitcoin investing result in stringent due diligence processes which can hinder active investments in BTC on behalf of corporations.

Despite these issues, several large firms have developed innovative ways to gain exposure to BTC indirectly. Some have taken the more direct approach of buying and holding it on their balance sheet. Others have opted for more traditional blanket investment vehicles. Separately, some public companies have a stock which displays price action very similar to that of Bitcoin, due to the nature of their industry.

In subsequent sections, we will look at the likes of Microstrategy, Coinbase, Grayscale Investments and Canaan. Inc.—four public companies which feature some indirect exposure to Bitcoin to a certain degree, regardless of the existing challenges involved.

MicroStrategy is a data analytics platform that provides companies of all sizes with actionable intelligence. It allows users to create bespoke real-time dashboards by customizing data representations. It also takes advantage of data connectivity, machine intelligence, and mobile accessibility to provide individuals with complete control over their findings.

Microstrategy stands out as a leader within the enterprise analytics sector due to its ease of use and scalability. However, this software behemoth has also taken an active interest in the world of cryptocurrencies, with a significant amount of Bitcoin on its balance sheet.

According to Bitcointresuries, Microstrategy sits atop the pile of publicly traded companies that hold Bitcoin on their balance sheets. The firm’s 129,218 BTC cost almost $4 billion at an average price of $30,955 per BTC. Currently, Microstrategy’s total BTC holding is valued at $5.23 billion, equivalent to a 33% increase in value.

Recently, Microstrategy took a three-year collateralized loan from Silvergate bank to purchase more Bitcoin. The loan is backed by Microstrategy’s Bitcoin holdings and roughly quadruples the loan value. To further reinforce its BTC holding strategy, Micheal Saylor, its CEO and avid BTC maximalist has publicly said his company will not sell its bitcoin.

Consequently, the result of Microstrategy’s Bitcoin foray has seen its stock price find a growing correlation with BTC’s price. The past year has witnessed the prices of both assets rise and fall in tandem, as seen below. MicroStrategy’s share price largely mimicked Bitcoin’s rally to its all-time high in November and subsequent decline. This development indicates a growing link of investors’ sentiment between both assets.

Coinbase is a cryptocurrency trading and investment platform that allows customers to buy, sell, and exchange over 100 different cryptocurrencies. The company boasts over 89 million users and $278 billion in assets, while its quarterly traded volume stands at $547 billion.

As a powerhouse crypto exchange, Coinbase provides crypto traders and investors with an easy-to-use platform to carry out their activities. Both novices and experienced individuals would find the robust services suite and interface suitable for trading and investing.

The platform is also regulatory compliant, adhering to global anti-money laundering (AML) and know-your-customer(KYC) rules. It also complies with sanction laws administered by the US Treasury department. Hence its services are available throughout the US and globally in over 100 countries.

Undoubtedly, Coinbases’ position as one of the most recognized crypto exchanges means that its stock already offers exposure to Bitcoin, due to the nature of Coinbase’ business. Yet beyond this, Coinbase holds about 4,487 BTC on its balance sheet, currently valued at over $328 million, purchased at an average price of $28,897 per BTC. 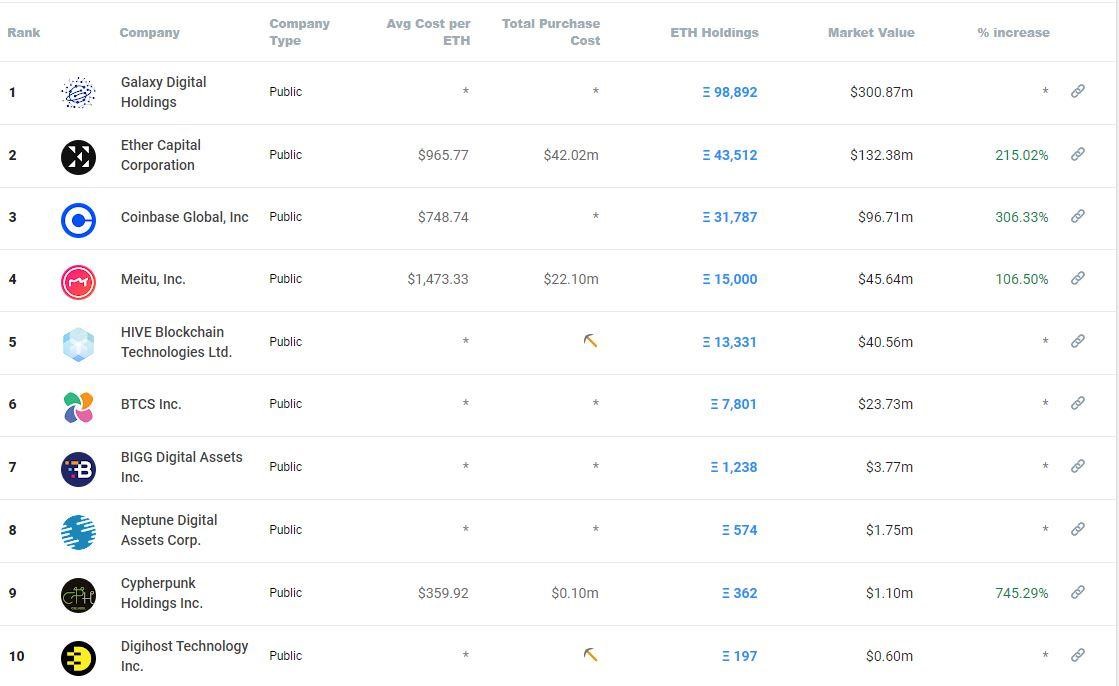 Alongside its BTC, Coinbase also holds Ethereum, the second-largest digital asset on its balance sheet. As seen in the chart above, its 31,787 ETH ranks it third among publicly listed companies with Ethereum on a balance sheet. The current value of its ETH stash is $96.7 million, which was bought at an average price of $748.77.

Like Microstrategy, Coinbase’s share price is linked closely with Bitcoin’s value. Both prices are closely correlated, rising and falling in step with each other.

The company’s ASIC (Application Specific Integrated Circuit) chips have become a common feature in Bitcoin mining rigs globally. Initially, its largest marketplace was China due to the high concentration of miners in Beijing. However, following the crackdown on mining activities last year, miners have fled to other countries with pro-mining laws and cheap labor and electricity. 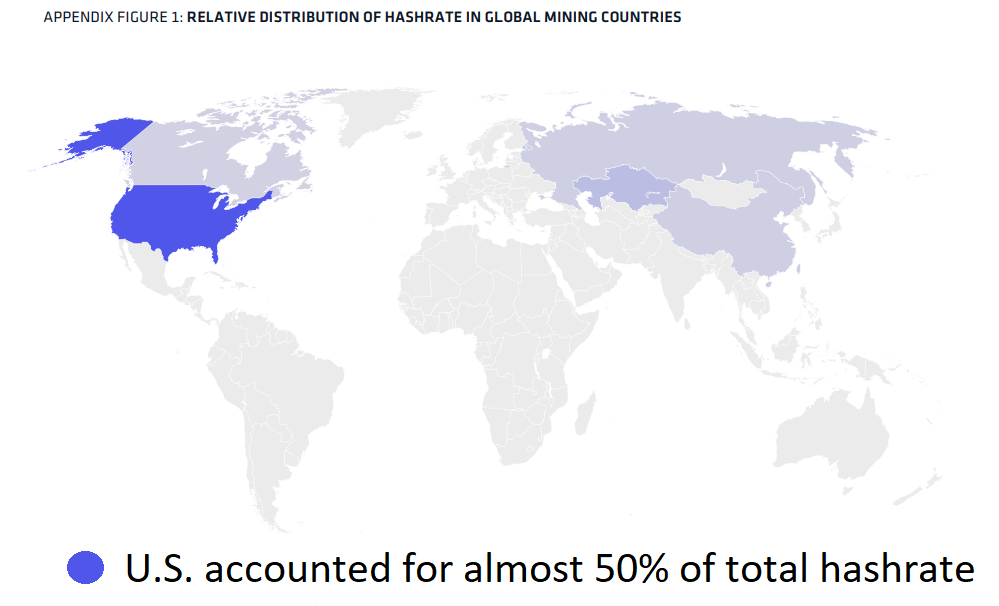 Consequently, the US has become the new go-to destination for Bitcoin miners, as seen in the global mining hash rate distribution above. According to a recent Coinshare report, the US now accounts for half of Bitcoin’s global hash rate—and that figure is only expected to grow.

Initially, Kazakhstan provided a suitable destination for miners. Canaan entered into a strategic alliance with local mining companies to expand its operations in the central Asian country. However, Kazakhstan’s government called for higher taxes, cut off power and cracked down on illegal mining operations. The situation has led to Bitcoin miners leaving the country.

Consequently, Canaan’s Bitcoin mining links mean holders of the company’s shares are indirectly exposed to Bitcoin. A boom in BTC would lead to an increase in demand for mining equipment and vice versa, affecting Canaan’s share price.

The Grayscale Bitcoin Trust is a digital currency investment product that individual investors can buy and sell in their brokerage accounts. The trust enables investors to gain exposure to the price movement of Bitcoin through a traditional investment vehicle.

Consequently, investors have access to buy and sell public shares of the Trust under the symbol GBTC. However, the Trust is not an ETF. Grayscale claims it is based on popular commodities investment products such as the SPDR Gold Trust, a physically-backed ETF.

Despite this, Grayscale has made repeated fillings at the SEC to approve a Bitcoin Spot ETF (Exchange Traded Fund) backed by its Bitcoin holdings. The regulatory body has largely passed on its offer, generally favoring Bitcoin Futures ETFs, of which it has approved several.

The SEC cites market manipulation concerns and the absence of a surveillance-sharing agreement between an ETF provider and the market trading the underlying asset. This, it says, is why it has rejected all spot ETF applications. However, Grayscale is hopeful of a change in the regulatory body’s stance.

According to Bitcointresuries, Grayscale maintains one of the most significant Bitcoin holdings in the world. It has 645,885 BTC, currently valued at over $26 billion. Aside from this, Grayscale also boasts over $40 billion in crypto assets under its management as of December 2021.

Through its various trusts, Grayscale offers an avenue to investors to indirectly gain exposure to digital assets in a regulated manner.

In conclusion, Bitcoin continues to gain widespread adoption globally. The general acceptance has caused large corporations to make significant efforts to access Bitcoin. Also, with inflation reaching 40-year highs, it’s safe to say that some of these public companies see Bitcoin as a worthy inflation hedge.

Despite the inherent challenges and risks involved in investing in digital assets, more companies are adopting novel approaches to gain Bitcoin exposure. This, in the long run, will ensure they are positioned adequately to reap the benefits available in the developing industry.

Get Smarter on Crypto and Macro. Get the 5-minute newsletter that keeps investors in the loop. Five Minute Finance is an independently run newsletter covering the latest and most important trends in crypto, macro, and global markets.