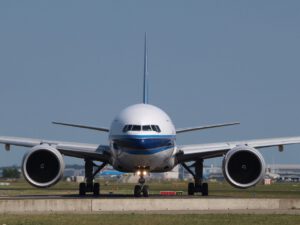 Boeing Co (NYSE:BA) posted a loss of almost $1.5 billion for the quarter, due to costly delays amid the Russia-Ukraine conflict. The revenue and sales of the American aerospace manufacturer were also below analysts’ expectations.

As reported by The New York Times, Boeing reported a loss of over $2 per share as it has announced it is pausing the production of its twin-aisle 777X. Deliveries of the aircraft are expected to start in 2025.

Revenue of the company hit $13.99 billion, way short of analysts’ expectations of $16.02 billion.

The company also said it had a $212 million charge due to Russia’s invasion of Ukraine, while delays in the Air Force One and the T-7A Red Hawk programs have cost the company $660 million and $367 million, respectively.

Revenue of its commercial aircraft department fell by 3% from a year ago to $4.16 billion, as informed by CNBC. This is mainly due to the deliveries of the 787 Dreamliner remaining halted.

Still, Boeing was given a lift as production of its formerly troubled airplane, the 737 Max, is said to increase to 31 units a month, while there is optimism within the company about resuming production of the 787 as it awaits certification by the FAA.

Boeing CEO David Calhoun said in a release, “While the first quarter of 2022 brought new challenges for our world, industry, and business, I am proud of our team and the steady progress we’re making toward our key commitments.”

The company remains cash flow negative but there is also hope the situation will be reverted in the next few months.

“Through our first-quarter results, you’ll see we still have more work to do; but I remain encouraged with our trajectory, and we are on track to generate positive cash flow for 2022.”

“We are a long-cycle business, and the success of our efforts will be measured over years and decades; not quarters,” he added.