Are you wondering if it’s worth choosing a long position in the gold market now? Well, consider taking a look at the junior miners first to find out.

On Thursday, I wrote that I was going to go long on junior mining stocks, and in the following hours, the GDXJ moved even a bit lower, providing you with a great opportunity to exit short positions and enter long ones in a comfortable manner. Hopefully, you did that, because the GDXJ rallied by almost 4% on Friday and ended the week above $37. The popular leveraged ETF, JNUG, was up by over 7% in a single day.

If you’re long on miners and you reaped those profits – congratulations! If not, let me re-emphasize what I wrote in Friday’s extensive flagship Alert: it seems to me that the short-term rally has only begun, and that quick profits are likely just around the corner.

Looking at gold’s pre-market decline, one might get second thoughts about the above, but please note that we are long on mining stocks, not gold, and there is a good reason why I chose mining stocks as a proxy and not gold or silver. The reason is that miners tend to show strength relative to gold before the bottom and then immediately thereafter.

Consequently, even if gold didn’t bottom last week and we’re seeing a bottom more or less right now, it doesn’t necessarily mean that miners will test their lows too.

Let’s check what’s gold been doing so far this week.

Gold is down to new lows in today’s pre-market trading, and it’s well below my initial target area for it. However, another important support level is just around the corner.

I don’t mean just the psychologically important (being round) $1,800 level. That too, but it’s crucial to note that gold just moved to levels from which the entire war-tension-based rally started. If it wasn’t for those tensions, gold would likely have plunged profoundly in February and perhaps it would be already after or getting close to its final low. However, since the war has indeed started, gold peaked (when the tensions and uncertainty peaked), and it’s been moving lower since that time – despite what most analysts told you.

Here’s what I wrote on February 28, 2022, in the Gold & Silver Trading Alert entitled “Since There is a War, Gold Will Rise, Right? Wrong.”:

Let’s keep in mind that for gold to decline, the war doesn’t have to end, it doesn’t have to be won by either side. The only thing that matters with regard to it, is how big the uncertainty and concern is. And the peak uncertainty/concern might be today, as everything is new, and the situation is dramatically changing the geopolitical environment in Europe.

For comparison, remember Covid-19 cases, deaths in early 2020? That was just a tiny fraction of what we saw later. However, it was new and unknown. People were particularly scared then, and the markets moved particularly significantly then – not based on additional millions of cases and thousands of deaths next year.

Investing and trading are difficult. If it was easy, most people would be making money – and they’re not. Right now, it’s most difficult to ignore the urge to “run for cover” if you physically don’t have to. The markets move on rumor and sell the fact. This repeats over and over again in many (all?) markets, and we have direct analogies to similar situations in gold itself. And junior miners are likely to decline the most, also based on the massive declines that are likely to take place (in fact, it already started) in the stock markets.

That wasn’t the peak uncertainty, but the latter peaked about a week later, and the war is still taking place months later, so it seems that one could say that the above proved to be correct.

Since junior miners just moved to new 2022 lows, it was also profitable not to chase the “emotional stampede”, but rather focus on the analogies to the previous situations from the past. Based on how the situation has developed in the markets so far, it seems that the clearest analogy is to how the gold market performed in 2001, based on the U.S.-Afghanistan war. I provided the chart in my Feb. 28, 2022, analysis, but here it is again: 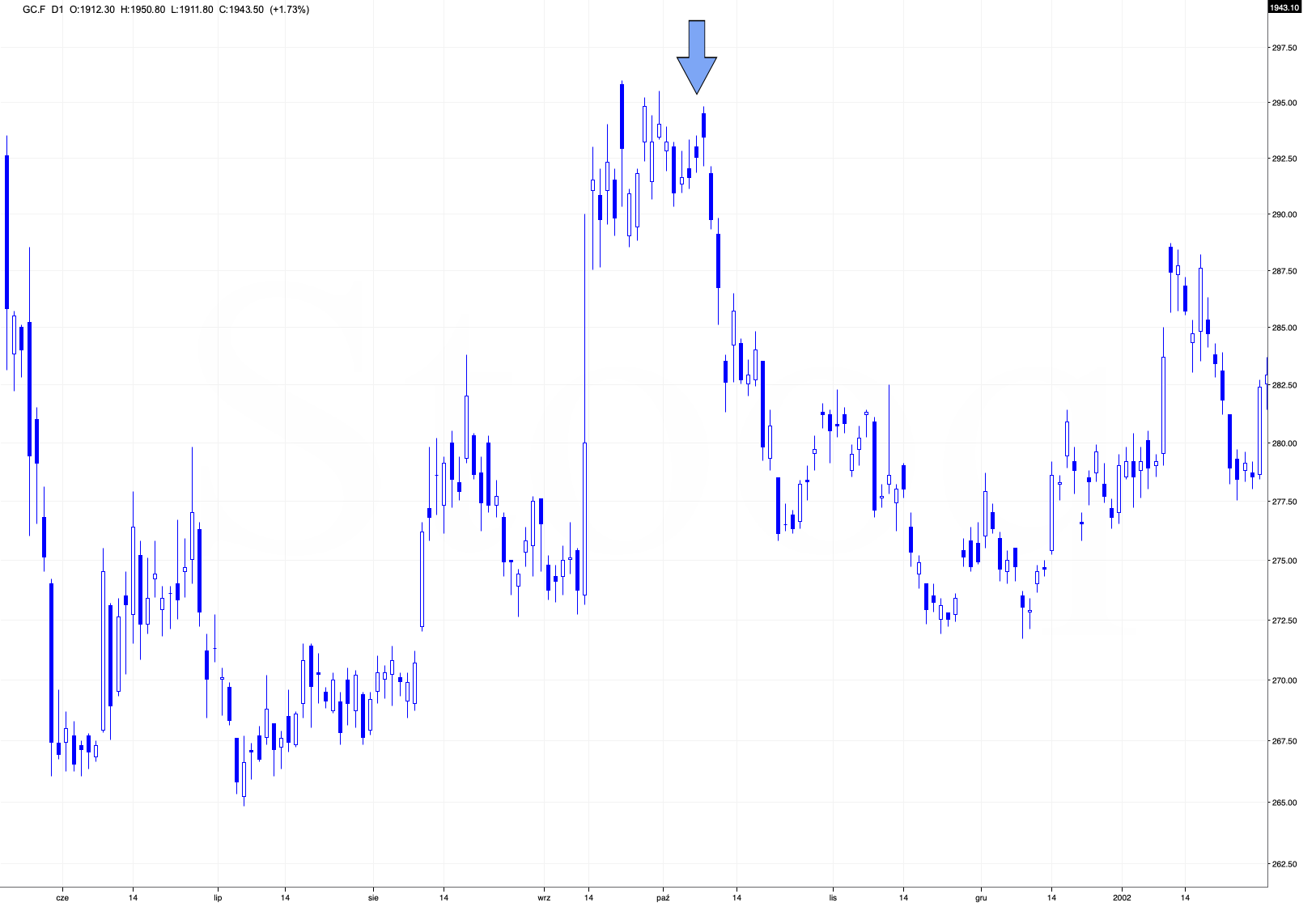 The decline had been big and sharp, but please note when it ended. Gold formed an initial, and then final, short-term bottom, very close to the price levels at which the rally started before the outbreak of the war.

Fast-forward to the current situation – these are the levels that gold is approaching in today’s pre-market trading.

All this means is that gold and silver prices might have just bottomed or that they could bottom shortly.

Let’s not forget what miners tend to do before and right after bottoms – they tend to show strength relative to gold. Let’s check what the GDXJ ETF is doing in today’s London trading.

It corrected somewhat, but unlike gold, the GDXJ didn’t move to new lows today. In other words, junior miners are showing strength, just as they are supposed to around the bottoms.

There are three more things on the above chart that I would like to discuss.

This serves as an indication that we might want to prepare ourselves to close the current long position and go back on the short side of the trade before the end of the week – perhaps on Friday. Geopolitically, a lot can happen over the weekend, so I’d prefer to be positioned along with the medium-term trend beforehand.

The invalidation described as the “second thing” is also something that we saw from the U.S. perspective, so it’s definitely important. 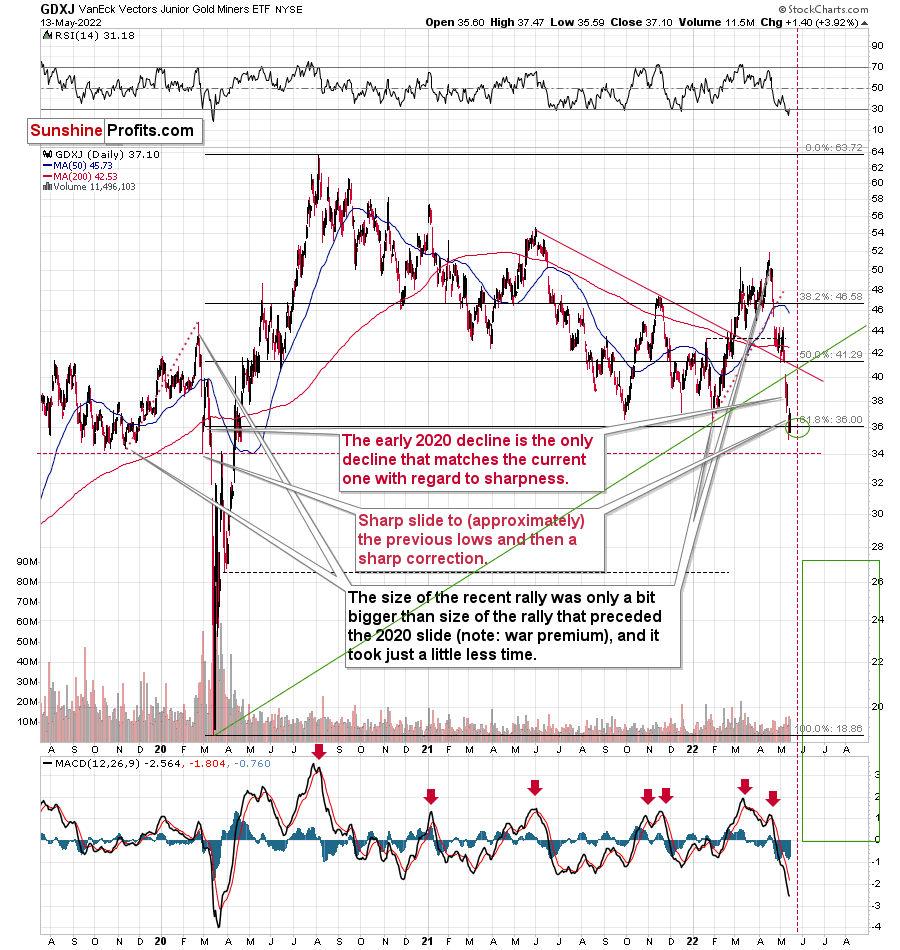 Please note that the triangle-vertex-based reversal point is practically the same from the U.S. point of view, so it adds credibility to the scenario in which junior miners top close to the end of this week. 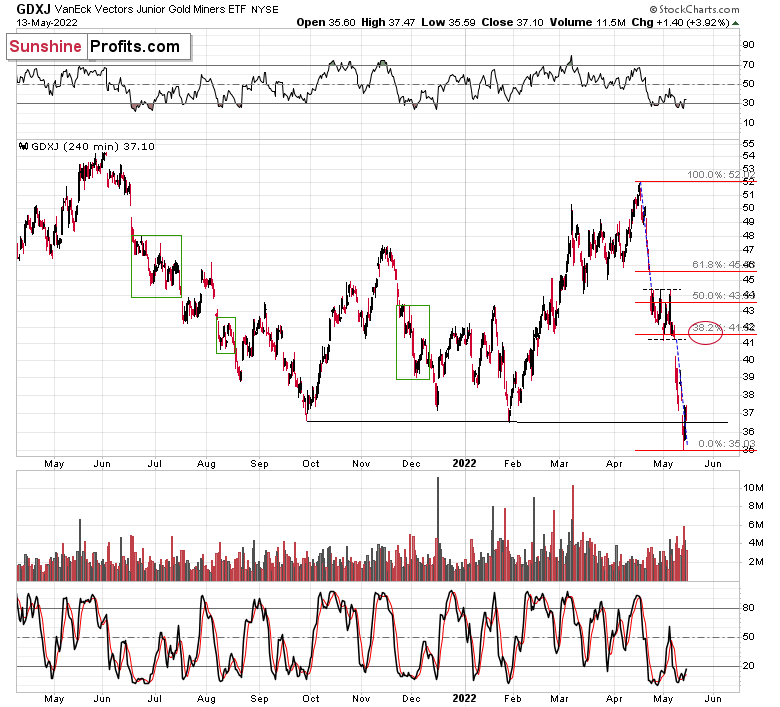 This fits the target area that I provided on Friday on the above 4-hour-candlestick GDXJ chart.

The target would also fit the sharpness of the recent decline. After all, corrections tend to be similarly volatile as the price moves that are being corrected. Of course, let’s keep in mind that the current long position is for trading capital only, not for long-term investments, as I don’t think that the medium-term downtrend in gold, silver, and mining stocks is completely over yet.

Thank you for reading our free analysis today. Please note that the above is just a small fraction of today’s all-encompassing Gold & Silver Trading Alert. The latter includes multiple premium details such as the target for gold that could be reached in the next few weeks. If you’d like to read those premium details, we have good news for you. As soon as you sign up for our free gold newsletter, you’ll get a free 7-day no-obligation trial access to our premium Gold & Silver Trading Alerts. It’s really free – sign up today.