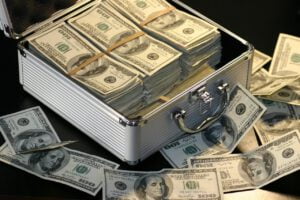 I’ve been living in the same Brooklyn neighborhood for the last thirty-six years, and for most of that time I’ve had an account at Independence Savings Bank, which is now Santander Bank. Just a couple of blocks from where I live, the bank has two ATMs available twenty-four hours a day, where I conduct ninety-nine percent of my transactions.

Is Your Money Safe At Your Bank?

I keep fairly high amounts of money in my checking account, mainly for withdrawals for monthly credit card bills, quarterly estimated income taxes, and occasional business expenses. I am willing to forego getting interest in exchange for this convenience and liquidity.

On the afternoon of March 2nd, when the ATM dispensed a mini-statement showing a mysterious withdrawal of $50,000 from my account, you can imagine my shock. I immediately called the bank’s Consumer Fraud Department, located in Providence, Rhode Island.

The woman I talked to informed me that I was the victim of wire fraud. After checking with a supervisor, she assured me that the bank would make good on this loss. The next day, I visited my local branch, closed my checking account and opened a new one.

This was just the beginning of my problems. While I was quickly issued a new ATM card, I would not get a new check book for three weeks. In the meanwhile, since I pay nearly all my bills through the bank’s ACH facility, I needed to get in touch with more than a dozen parties to switch my payments from my old account to my new one.

It would take many hours over many days to get through to all these folks. You know the drill: “All our agents are busy assisting other customers. Please stay on the line until the next available agent will assist you.”

That was the good news. But I still didn’t have a clue as to what had happened – and whether or not it might happen again. And when would I be getting my money back?

Each time I called Santander’s Consumer Fraud Department, the person I talked to seemed to be less competent and helpful than the previous person. Finally, I was told that someone allegedly named Morris Holmes had shown up at another Santander branch in Brooklyn and tried to get the missing $50,000. It was suggested that I go to that branch and ask them what might be going on. Silly me! I had thought that that was the bank’s job.

Eventually, I figured out that the Consumer Fraud Department was basically a call center, staffed by employees with limited skills and little authority. Even more upsetting, I was told repeatedly that there was no way I could escalate my case.

What was especially unsettling was neither getting to speak to the same person twice, nor having anyone updating me on my case. By comparison, even the New York State Department of Motor Vehicles and the Internal Revenue Service seemed paragons of courtesy and efficiency.

After making dozens of calls over four or five weeks, I finally reached a woman who identified herself as a Santander ombudswoman.  Before we spoke, she had managed to retrieve a transcript of my attempted communications with the people at the Consumer Fraud Department. She apologized for the poor treatment I had received. Within days, my $50,000 was finally restored to my account.

A week later, I received some very sage advice from an officer at my local Santander branch. He warned me that if I kept large sums of money in my checking account, the same thing could happen again. Why not just keep most of my excess funds in a money market account, where it would be much safer?

Think about that! In effect, he was giving me fair warning that the money in my checking account was not all that safe. I will certainly take him at his word.

This still leaves us with the question: Who dun it? And how was it done?

As luck would have it, a close family member is one of our nation’s leading experts at money laundering, bank fraud, and other financial shenanigans. Another relative is a top officer at a major Midwestern bank. Both say that nearly all the perpetrators are either current or former employees of the victim’s bank.

So, that leaves us with one unanswered question: Is your money – particularly your checking deposits — safe at your bank? It certainly is – until it isn’t.