The monthly Hedge Fund Report for April 2022 from the Citco group of companies (Citco), the asset servicer with $1.8 trillion in assets under administration (AuA).

In a turnaround from the positive returns almost across the board in March, hedge funds administered by the Citco group of companies (Citco companies) saw negative returns in April in almost all strategies and across all AUA categories.

As per the first three months of the year, Commodities was the star performer again with a 4.4% weighted average return – due to inflated commodities prices – followed by Event Driven at 1.6%. Global Macro had a slight positive return at 0.6%, while all over strategies were negative, with Equities posting the largest loss at -4%.

On an AUA basis, the largest funds over $3B had the largest losses at a -4.1% weighted average return; funds in the $500M-$1B range performed the best while still posting a -0.9% loss.

The gap between this month’s weighted average return at -2.9 and its median return at -0.8% also points to the under-performance of larger funds.

Investors and allocators added to hedge funds on the Citco companies platform in every quarter in 2021, with inflows outweighing outflows throughout the year – and this positive trend was repeated in Q1, 2022.

In each quarter last year, there were generally net positive inflows for the months intra-quarter, with the quarter-end trading cycle experiencing some net outflows. This trend was also repeated in Q1, with net subscriptions in January and February, followed by slight redemptions in March.

Our Q1 Hedge Fund Report will be with you shortly, providing full insights into quarterly performance, trade volumes, treasury payments and capital flows.

All AUA categories saw slight net subscriptions, bar funds between $5B-$10B, which finished flat, and funds larger than $10B, which saw slight redemptions of $300M.

The ongoing popularity of Hybrid Capital Funds dipped in April, with net redemptions of $800M, while Equities, Global Macro and Multi Strategy were the only strategies to finish in positive territory; the latter had the highest inflows with net subscriptions of $1.3B.

Per region, the Americas were slightly down, with Asia showing modest inflows and Europe up $1.4B.

For future cycles, $13.5B is scheduled to exit in the second quarter, with a further $6.3B of outflows projected for later this year.

A total of 72% of our staff are now approved to work from our offices, with 32 of our 41 locations fully open. Although the situation remains fluid in some regions and we are closely monitoring the situation, we expect the remaining nine offices to have fully opened by the end of July, which includes our offices in the Philippines, India and Canada. In line with our stringent Home to office (H20) policy, we will continue to follow guidelines around the world and adjust our office staffing policies accordingly.

A total of 92% of SLAs were delivered on time in March, which equates to some 3,081 specific service goals. Also, we achieved 100% of client deliverables in April. 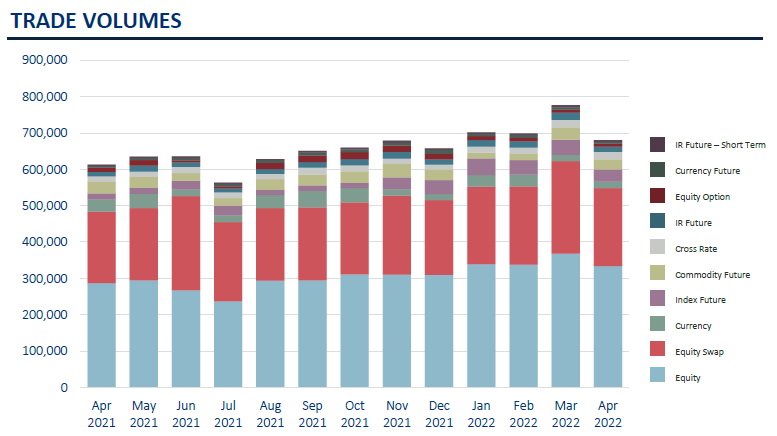 The relative calm at the end of March that we pointed out in last month’s report was short lived – as volatility in the markets rose steadily towards the peak last seen in early March. While the overall daily average volumes across Citco companies’ client base in April was down 12% from March, this was still 11% higher than a very busy April, 2021.

The increases since 2020 were largely led by high frequency trading strategies, particularly in Equity and Equity Swaps. In April, these strategies were down 13.4% on average volumes than the rest of our client base, which was only down 5.2% month-over-month. In terms of asset classes deployed, rates on Futures, Commodities, Currencies and Indices were down between 30-50%. CDS trades were 44% lower than in March.

Insights into Payments, Treasury and Collateral 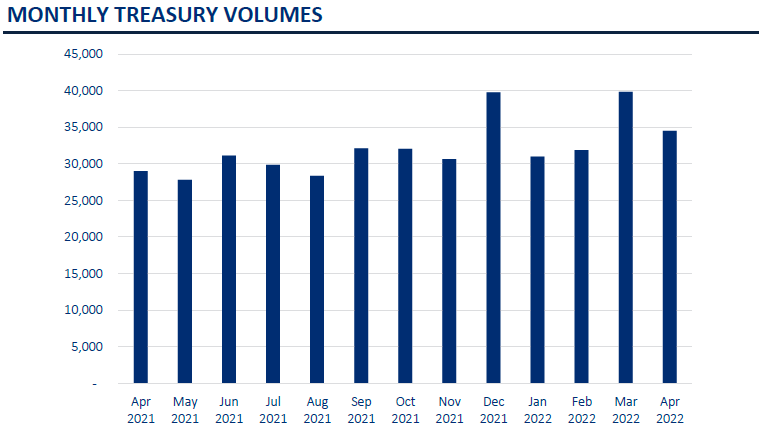 The overall Treasury volumes across our client base in April were 34,511 movements, down 13% month-over-month, but March was a record month for Treasury movements with the highest volumes we have seen to date.

It is worth noting that April volumes were still higher versus the same period last year by 18%.

With increased market volatility, we are seeing a tighter management of cash across prime brokers and OTC counterparties, a trend we expect to see until the markets calm down. 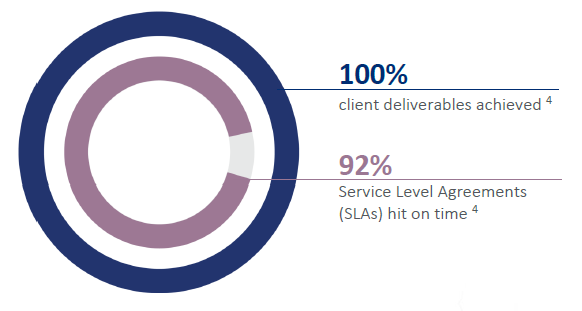 About the Citco group of companies (Citco)

The Citco group of companies (“Citco”) is a network of independent companies worldwide. These companies are leading providers of asset servicing solutions to the global alternative investment industry. With $1.8 trillion in assets under administration and over 8,000 staff deployed across 40 countries, Citco’s unique culture of innovation and client-driven solutions have provided Citco’s clients with a trusted partner for more than four decades. Having grown organically into one of the largest asset servicers in the industry, Citco’s Fund Services companies offer a full suite of middle office and back office services including, treasury and loan handling, daily NAV calculations and investor services, corporate and legal services, regulatory and risk reporting as well as tax and financial reporting services. Investing heavily in innovation and technology whilst further developing its current suite of client friendly solutions, Citco will continue into the future as a flagbearer for the asset servicing industry.