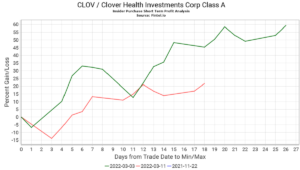 CLOV shares gained eight ranks this week on the Fintel Most Widely Held Stock Leaderboard and are currently the 12th most widely held security among retail investors on the platform.

Clover Health was initially listed on the Nasdaq in January 2021 via a merger with SPAC (Special purpose acquisition company) Social Capital Hedosophia Holdings Corp. III. Soon after listing, the firm came under pressure following the release of a negative short-seller report from Hindenburg Research. Throughout 2021, CLOV attracted various short sellers that drove the share price lower and rose flags with stock meme traders. Shares saw several share price spikes from retail investors that burned various fund managers that took short positions. After the second large spike in June 2021, shares have gradually traded lower to now trade at $2.74 per share with a market capitalization of $1.3 billion.

CLOV shares over the last month have outperformed the broader Nasdaq, only falling -by 4.9% compared to the index, which is -13.8% lower. CLOV shares, however, fell -27% from Wednesday the 4th to the 11th of May and then recovered most of the gains.

Most recently, on the 9th of May, Clover Health provided its first-quarter results update to the market. The results highlighted total revenue of $874.4 million vs. analyst expectations of around $787 million, driving an 11% beat at the top line. When assessing profit before tax from operations, the company reported -$74.8 million in adjusted EBITDA, a better figure than the streets’ forecasts of -$105.3 million. Adjusted operating expenses rose from $58.2 million to $84.4 million, which was expected as the firm scales up in size.

In addition to the result, Clover reaffirmed guidance for the full year. The guidance reaffirmed revenue for $3-3.4 billion, in line with consensus expectations of around $3.25 billion. The company expects to end the year with insurance members of 84,000-85,000, holding relatively firm from the current membership balance of 85,026 at the end of Q1. Management commentary accompanying the guidance stated: “We believe there are multiple levers that we can utilize to drive another step-wise improvement in our Insurance MCR, better Non-Insurance results and lower operating expenses.”

The firm remains cautiously optimistic about the remainder of 2022, given the uncertainty that lies ahead in global markets.

CLOV also filed a $300 million mixed file shelf S-3 registration after the results. This earmarks the possibility of equity raising over the year.

What Did The Analysts Have To Say About The Result?

Gary Taylor from Cowen expects the company will need to raise equity capital in 2022 and leaves their forecasts unchanged. They also highlighted that management stated there is some level of conservatism in the current guidance. Cowen remains a ‘market perform’ rating with a target of $3.

Richard Close from Cannacord Genuity believes management takes a conservative stance on guidance that provides potential upside for the stock. The firm remains ‘buy-rated with a target of $7 and notes that Clover insulates investors from several current market headwinds related to inflation, supply chain uncertainties and potential recession impacts on financial performance.

Clover Health has a consensus ‘hold’ rating with an average target price of $4.00 per share, implying a 46% upside to the current share price. We note that the consensus target has been drifting lower with the share price but has remained around the $4-5 range since 2022.

Some key highlights from quant analysis on the Fintel platform include a high Ownership Accumulation score of 83.62 and Insider Accumulation score of 88.47. These scoring models are calculated using multi-factor quantitative models that identify companies with the highest levels of insider and institutional buying activity. You will find a table that helps understand if these insider trades generate abnormal returns.

The following table shows the most recent open market purchases that were not part of an automatic trading plan.

Accompanying the table is a chart that shows the returns from recent trades: 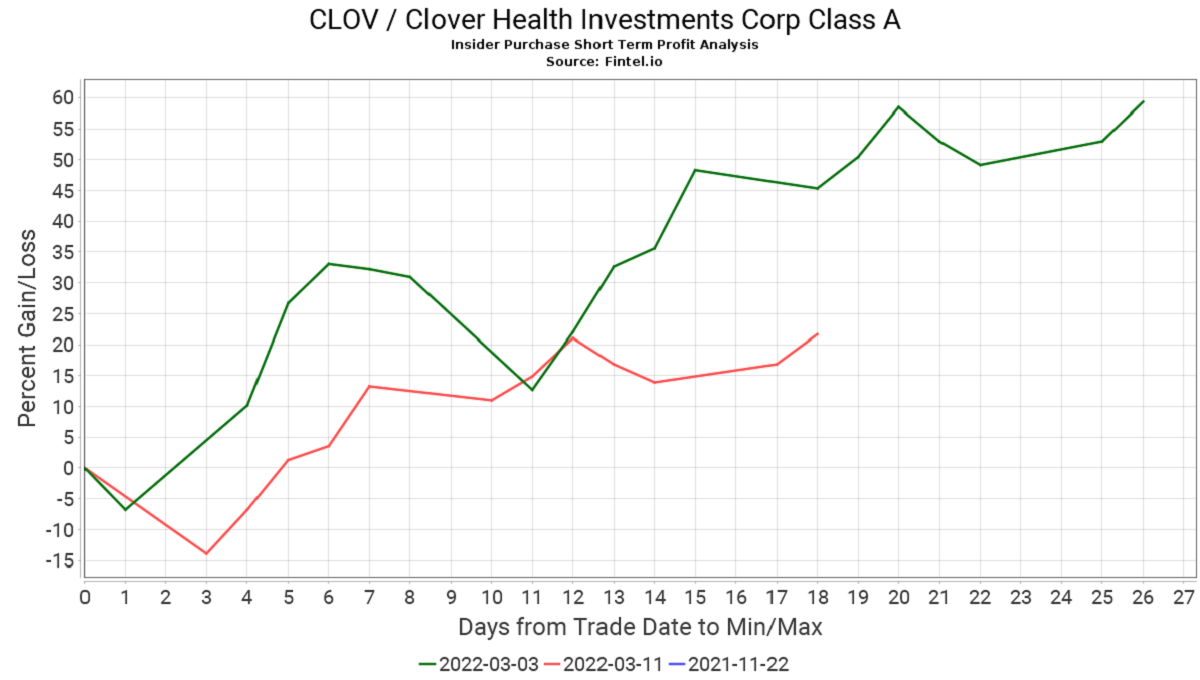