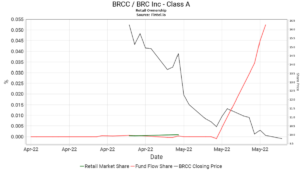 Black rifle is a premium small-batch coffee business that sources, processes, manufactures and sells coffee food and beverages and imports its beans directly from Colombia and Brazil. Military veterans own and operate the company.

The company is listed on the NYSE via a SPACC merger with SilverBox Engaged Merger Corp I. in Feb. 2022.

Black Rifle shares surged after their listing, trading as high as $34 in early April on investor hype and a flurry of broker initiations. The stock also developed something of a following among meme stock faans.

The stock’s long decline from April highs and fell below $10 a share, its initial trade after listing. Sporting a roughly $2 billion market cap and a below-debut price has driven retail investor attention.

The chart below shows the Retail Ownership spike during May. 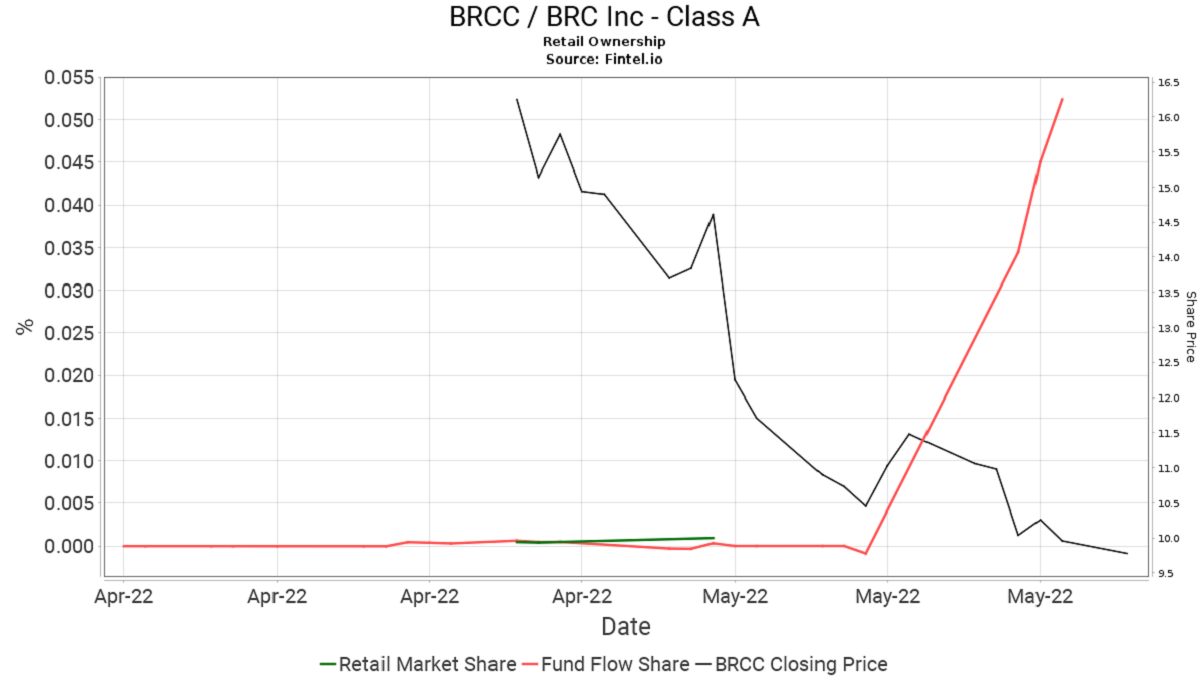 Earlier this month, Black Rifle reported financial results that included above estimate revenues of $65.8 million vs. forecasts of $64.2 million. The firm posted a $6.2 million EBITDA loss versus a projected -$2.7 million. A 35.3% gross margin topped analysts’ estimated 34.5%.

The firm has been plagued by a slower than expected ramp-up in Outpost stores and constrained product availability that will restrict revenue upside in 2022. These could be likely contributing factors to the recent share price weakness.

Management noted that they see some near-term margin pressure on the earnings call, and they expect Q2 gross margins and EBITDA to be similar to Q1. However, the firm maintained its full-year target of positive EBITDA, which will depend heavily on the second half ramp up at the end of 2022.

Some Fintel analysis highlighted the elevated Short Squeeze Score of 84.24 on the stock and 6.8% of the firm’s capital currently shorted. This score This leader board uses a quantitative model that analyses several short-related factors to help track stocks with a higher likelihood of a short squeeze. 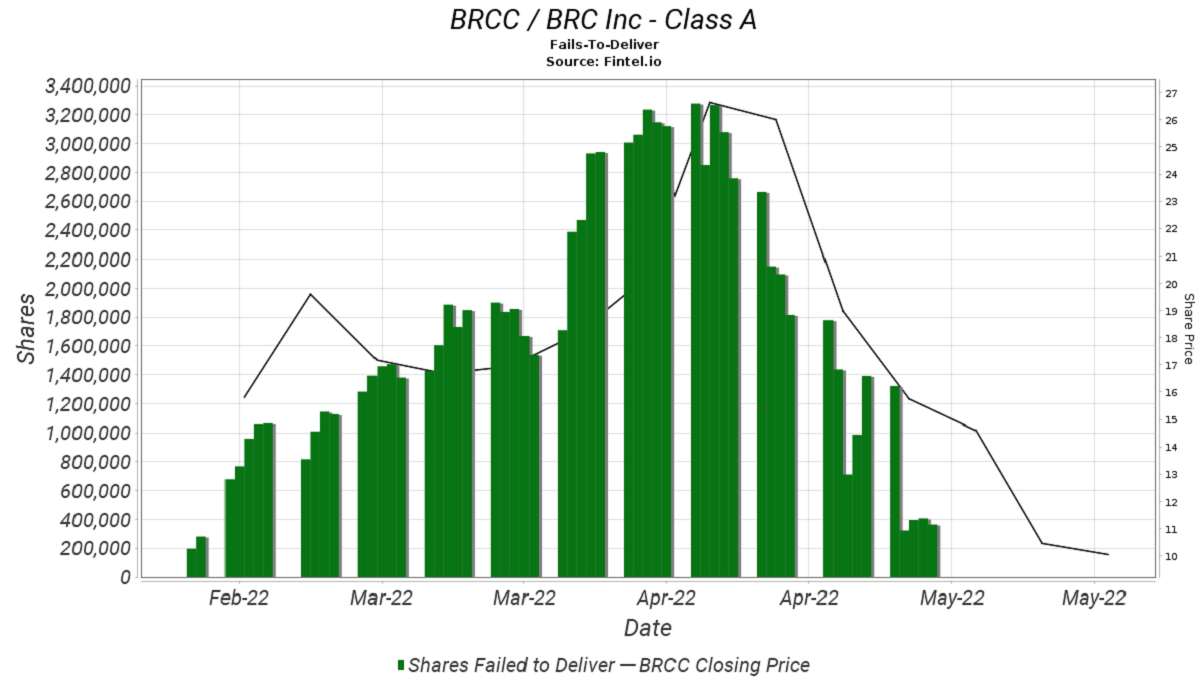 What Do Analysts Think Of The Stock?

Laurent Grandet from Guggenheim securities believes the positive EBTIDA target is not achievable and this will likely overhang the stock. They do, however, believe BRCC is a promising stock that will expand through an omnichannel strategy and remain a ‘neutral’ rating with a target price of $10.45.

Sarang Vora from Telsey Advisory believes new initiatives such as expanding menu items, ramping up production capacity, higher prices and enhanced marketing should support strong growth. They note that the headwind pressures on profits are masking these initiatives, but a higher commodity and operating costs should start to subside in the second half of 2022. The firm remains ‘outperforming’ rating with a target price of $20.

Sharon Zackfia from William Blair retains an ‘outperform’ rating as the firm expects 30%+ revenue growth due to various expansionary initiatives across the business.

BRCC has a consensus ‘overweight’ rating with an average target price of $16.17, implying +66% upside to the price. We note the consensus target has been retracing over the last two months.

For the full year 2022 end, the market is forecasting Black Rifle to generate revenue of around $317.5 million, which would represent 36% year on year growth if achieved. While BRCC has guided to a net positive EBITDA by the end of the year, the market remains slightly bearish with a consensus forecast of -$2.8 million.