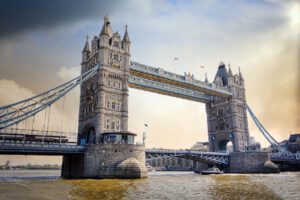 The ONS has detailed how events in history compared to the effect of the pandemic: GDP and events in history: how the COVID-19 pandemic shocked the UK economy – Office for National Statistics (ons.gov.uk)

“The UK economy has shuddered with a series of shocks since Queen Elizabeth II was crowned in June 1953, following her accession in February 1952. There have been oil shocks, financial crises, market mayhem, war and a pandemic and at times inflation has soared much higher than today’s hot prices, with the economy setting off on multiple rollercoaster rides during her 70 year reign. The stock market has suffered in tandem with these shocks, but has regained form in the years which have followed.

The invasion of Egypt by Britain, France and Israel following the nationalisation of the Suez canal just three years after the coronation sparked an economic crisis with intense speculative pressure on the pound leading to a flight of capital from the UK. Consumer price inflation reached the scorching levels of 24% in July 1975, after an oil embargo was slapped on Western nations by the oil cartel OPEC, leading to a deep recession.  There was not much respite before the Iranian revolution sparked a fresh spike in energy prices, laying the chill ground for a winter of discontent amid soaring interest rates and mass walk outs with household spending plummeting by 4.2%. Just a few years later the miners’ strike led to production plummeting and unemployment reaching record levels of 11.9% in the second quarter of 1984.

Investors have been taken on a wild ride with other falls clocked up sparked by infamous events such as the Black Monday crash in October 1987 which saw the FTSE 100 fall 23% over two days. The bursting of the dot com bubble in 2000 led to a sharp downturn in the FTSE All share, falling by around 50% over three years. But this volatility was then overshadowed by another deep rout after the global financial crisis hit the markets in September 2008 with the repercussions causing unemployment to soar to 8.4% and house prices plummeting 15% in a year. The shock of Brexit inflicted pain for the pound which fell to a 31 year low on currency markets as traders fretted about the impact of leaving the EU for the UK economy. Less than four years later investors had to buckle up to ride out the damage wreaked by the pandemic. Lockdowns between April and June in 2020 caused household spending to plunge by 20%, the largest quarterly contraction on record, sparking the biggest ever decline in output, with GDP falling 19.8%.

As preparations for the platinum jubilee events continue, volatility has again hit the financial markets as the commodity chaos unleashed by the devastating war in Ukraine sends inflation soaring once more.  Don’t be surprised if there is another knock to economic output in June’s GDP snapshot. All the planned celebrations over the jubilee extra-long weekend are expected to lead to a drop in productivity, as flag waving, parties and BBQs replace hours punching keyboards and on factory floors. The golden jubilee celebrations in 2002 saw production fall by 5.4% and it dipped again in 2012 for the 60th celebrations. But that is likely to be a very small fall compared to the economic storms the Queen has witnessed time and time again over her reign.

Rapid falls in the price of shares exacerbated by economic shocks can be unnerving for investors but tough times have been shown not to  last forever, and markets eventually recover. With inflation appearing to run rampant, and a recession looming right now, there are clearly tougher times ahead for companies and consumers but it’s important for investors to think back to their long-term strategy and stay resilient when markets are jittery. We don’t know exactly what is round the corner but by keeping calm and carrying on, instead of impulsively selling, might benefit you in the long run when prices eventually recover.”