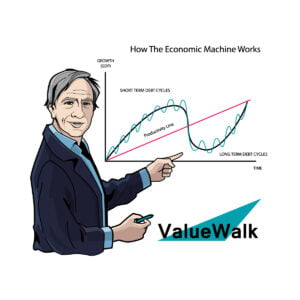 The “Power Score Index” for Countries Shows 18 Measures of Strength & Provides an Aggregate Power Reading for 24 Countries Based on the Research Shown in Dalio‘s Latest Bestseller, the Changing World Order

Based on the research described in his recently released and latest New York Times Bestseller — Principles for Dealing with the Changing World Order: Why Nations Succeed and Fail (Changing World Order) — famed investor and author Ray Dalio today announced the release of the inaugural edition of his new Country Power Score Index (“Power Score”). The index shows levels of 18 different types of strengths and combines them into an aggregate measure of power for the top 24 countries. Besides being able to compare countries’ strengths and watch them evolve over time, one can use the Power Score as a good leading indicator of future conditions. Due to the scores being an objective measure of health that are leading indicators of future well-being, they also provide a guide for producing improved outcomes for policy makers and can serve as a tool for individuals for anticipating conditions.

The index was crafted in a way that only Dalio can do because of his experience as a global-macro investor and student of history for more than 50 years. To do his job well, Dalio has spent decades studying what makes countries and their markets rise and decline. He and his Bridgewater research team converted his learnings into the 18 different determinants of power — including education, innovation and technology development, civility of people, economic output, incomes and balance sheets, reserve currency status, military, etc. — to generate readings that measure countries’ strength in these areas and serve as indicators. Weighing different quantitative indicators and drawing from hundreds of data series, the indices convey pictures for 24 countries that are helpful in decision making. The whole process, including writing the text descriptions of what is happening, has been computerized so that the index will continue independently and beyond Dalio.

“As a global-macro investor, I discovered early on that I needed to understand the cause-effect relationships that drive conditions and market movements, and that I needed to study many cases through history in order to gain that understanding. That’s because many circumstances that I encountered never happened in my lifetime but happened many times before,” said Dalio. “Over many years, I studied the drivers that cause countries, empires and world orders to rise and fall to help me deal with what was coming at me. That created a roadmap that actual events have by and large followed and are still following. When I started doing this and put out the research, the changing conditions painted by this process were highly controversial, but since then, events that have transpired have been consistent with this template, so these changes are now fairly obvious to most. However, the pictures they paint still remain non-conventional. My reason for putting out this index is to show these things for others, so they can evaluate them for themselves and to help policy makers and average people have better understandings, which they can use to make better decisions that can produce better outcomes.”

The index is available at www.economicprinciples.org and will be updated annually. The readings shown in the indices paint very rich pictures of each country’s various styles of strengths and weaknesses and whether they are improving or deteriorating. A very superficial summary of the key findings at this time shows:

The full analyses and Power Score Index can be viewed at: www.economicprinciples.org.

Watch the animated video of Principles for Dealing with The Changing World Order, which distills the key concepts of the book by the same name and which the index is based on below.

Dalio is the founder, Co-Chief Investment Officer and board member of Bridgewater Associates, a global leader in institutional portfolio management, and the largest and most successful hedge fund in the world with approximately $150 billion in assets under management. Dalio started Bridgewater out of his two-bedroom apartment in New York in 1975 and over the course of its 45+ year history grew it into the 5th most important company in the U.S. according to Fortune Magazine. For his innovative work, Ray has been called the “Steve Jobs of Investing” by Wired Magazine and named one of the 100 Most Influential People in the World by TIME Magazine.

Dalio is also a long-running New York Times bestselling author, with notable work including Principles: Life and Work and Principles for Dealing with the Changing World Order. Due to its success, the first has been distilled into an easy-to-read, illustrated book, Principles for Success. He is also the author of Principles for Navigating Big Debt Crises. Additionally, Dalio has published several studies on his economic views, including “Why and How Capitalism Needs to be Reformed.”