0.5% rate hikes in June and July are likely settled. However, with inflation at 8%+, calming prices with such little action is completely unrealistic.

While investors continue their countdown until the Fed pivots and resumes QE, in some alternative reality, it’s perceived as bullish for risk assets. Sure, the short-term sugar high of more free money should uplift sentiment. However, I’ve noted on numerous occasions that the long-term consequences would be dire.

Thus, while investors await a superhero that’s unlikely to arrive, the ramifications of unanchored inflation should prove troublesome over the medium term. To explain, the FOMC released the minutes from its May 3-4 monetary policy meeting on May 25. The report revealed:

“Participants judged that it was important to move expeditiously to a more neutral monetary policy stance. They also noted that a restrictive stance of policy may well become appropriate depending on the evolving economic outlook and the risks to the outlook.”

“Participants observed that inflation continued to run well above the Committee’s longer-run goal and that inflation pressures were evident in a broad array of goods and services. Various participants remarked on the hardship caused by elevated inflation and heightened inflation uncertainty – including eroding American families’ real incomes and wealth and making it more difficult for businesses to make production and investment plans. They also pointed out that high inflation could impede the achievement of maximum employment on a sustained basis.”

As a result, 50 basis point rate hikes are now the consensus for “the next couple of meetings.” 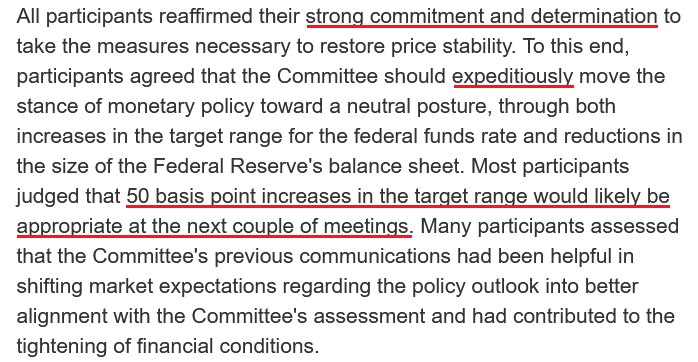 However, it’s important to remember that Fed officials’ primary objective is to calm inflation. They don’t want to crash the stock, bond, or commodities markets; the latter outcomes are simply collateral damage of what must be done to curb the pricing pressures. To explain, I wrote on Dec. 23:

The Fed’s only hawkish goal is to calm inflation. When inflation was running hot and most Americans bought into the “transitory” narrative, Fed officials exuded confidence. However, when consumer confidence sunk to a 10-year low and inflation became political, the Fed changed its tune. As a result, Powell wants to reduce inflation while tightening as little as possible (3% to 4% inflation may be considered acceptable in 2022).

Thus, the Fed’s hawkish crusade has always been dependent on the path of inflation. Therefore, if inflation fades into the night, officials can turn dovish, and the bull market can resume on Wall Street. To that point, the FOMC minutes also stated:

“A number of participants observed that recent monthly data might suggest that overall price pressures may no longer be worsening. These participants also emphasized that price pressures remained elevated and that it was too early to be confident that inflation had peaked.”

As a result, while it’s “too early to be confident,” Fed officials, like investors, continue to search for signs of positive momentum. Moreover, Atlanta Fed President Raphael Bostic said on May 23 that he supports 50 basis point rate hikes in June and July.

“I’m at 50 basis points as long as the economy proceeds as I think it’s going to,” said Bostic. “If inflation starts moving in a different direction than it is right now, I’d have to be open to us moving more aggressively….

“It’s hard to know exactly how far or how hard we are going to push. But I think getting us somewhere in the 2% to 2.5% range by year’s end would be a good place for us to get to.”

However, he also opined that a wait-and-see approach could prove prudent in the months that follow.

Thus, Fed officials are open to pausing their rate hike cycle. For context, Bostic’s expectation of a U.S. federal funds rate “somewhere in the 2% to 2.5% range by year’s end” still implies eight to 10 rate hikes in 2022. Therefore, it’s not dovish.

For example, Fed officials were split about one rate hike when they made their projections in September. Moreover, in the months before that, they expected to taper their asset purchases in late 2022 and raise interest rates in late 2023. As a result, their read on inflation shouldn’t instill much confidence.

With Fed Chairman Jerome Powell still searching for his inflationary shooting star, the FOMC chief isn’t ready to label inflation as problematic. “I don’t think that we’re behind the curve,” he said. “I actually believe that policy is well-positioned to address the range of plausible outcomes, and that’s what we need to do.”

The reality is: while Powell has taken the path of least resistance to help calm inflation (the taper), his inability to understand the realities on the ground leaves plenty of room for hawkish shifts in the coming months (interest rate hikes).

Therefore, while the potential for three-straight 50 basis point rate hikes is profoundly hawkish, the Fed still underestimates the challenges that lie ahead. For example, S&P Global released its U.S. Composite PMI on May 24. I noted on May 25: 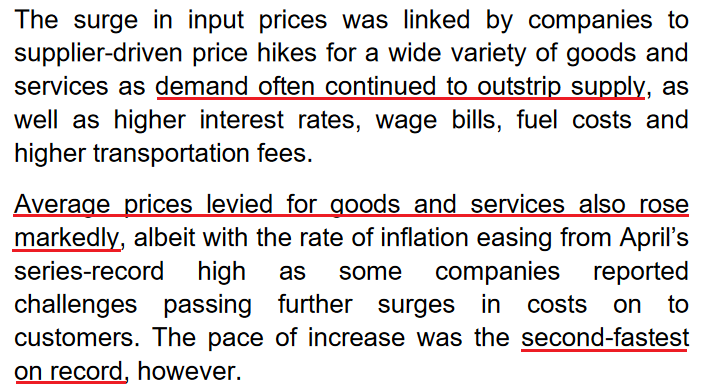 This data was collected from May 12-23. Therefore, inflation is still running away from the Fed, and three rate hikes (25 basis point increments) have done little to alleviate the pricing pressures.

Second, the Richmond Fed released its Fifth District Survey of Manufacturing Activity on May 24. The headline index declined from 14 in April to −9 in May, which is bearish for Fed policy. However, the report also revealed that “The average growth rate of prices paid increased notably in May. Firms also reported higher average growth in prices received in May.”

On top of that: “The wage index also remained elevated, indicating that a large share of firms continue to report increasing wages.”

Likewise, the Richmond Fed also released its Fifth District Survey of Service Sector Activity on May 24. The headline index decreased from 24 in April to 10 in May. However, while the wage index declined, the price indexes remained materially elevated.

Also, despite three rate hikes by the Fed, are these the kind of headlines that you see when inflation has calmed down?

“Foundries have already increased prices 10%-20% in the past year. We expect a further round of price increases this year, but smaller (i.e. 5%-7%).”

As a result, PCs, cars, toys, consumer electronics, appliances, and many other products could sell at higher price points in the near future.

If you analyze the chart below, you can see that the U.S. federal funds rate (the green line) nearly always rises above the year-over-year (YoY) percentage change in the headline Consumer Price Index (the red line) to curb inflation. Therefore, investors are kidding themselves if they think the Fed is about to re-write history.

In conclusion, the PMs declined on May 25, and the GDXJ ETF gave back some of its recent gains. However, the short-term uptrend remains intact, and the rally should continue in the coming days. Conversely, with investors still underestimating the severity of the Fed’s inflation problem, more reality checks should emerge over the next few months. As a result, the PMs’ recent optimism should reverse sharply over the medium term (perhaps quite soon).