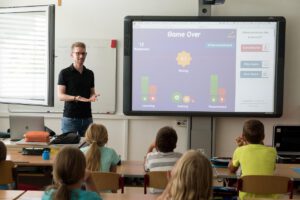 School Shootings – It’s Time For Teachers Themselves to Act; Three Things They Should Do Now Instead of Waiting For Governments

WASHINGTON, D.C. (May 26, 2022) – Rather than continuing to wait for governments to act to reduce school shootings by enacting laws which may not even be effective if ever adopted, teachers should act now to protect themselves and their students, argues public interest law professor John Banzhaf, who suggests three simple, proven, and effective steps they can and should take now, without further delay and needless risk of death or serious injury.

Some teachers – especially those who are already trained and licensed to carry concealed firearms – should have them in school on their person, or at least within easy reach in a secure gun safe in a classroom desk.

The mere posting of signs in the school – “WARNING; Some Teachers Have Guns” – should provide significant deterrence to many potential shooters, even if only a few teachers, whose identity will not be known to the students, actually have them.

Equally important, since law enforcement officials often take at least several minutes to arrive – and far longer in rural areas and some neighborhoods – an armed teacher already in the building can take effective action with a gun much more quickly, thereby slashing the number of deadly shots which can be fired by the intruder.

Teachers have occasionally attacked gunmen, with some losing their lives or suffering injuries, but even a small handgun in trained hands is much more effective than approaching a shooter with a chair, pole, or even bare hands.

The federal program under which some commercial airline pilots carry guns, even though they themselves are largely protected in the cockpit, shows that arming responsible and trained individuals who are not law enforcement personnel is safe, and does not led to wrongful shootings, intentional or negligent.

Reportedly some 20 states already authorize teachers who have received special training to carry a gun in the classroom, so the idea is neither farfetched or untested.

Even in the absence of such laws, many teachers already have a CCW [carrying a concealed weapon] permit. So, unless the law prohibits CCW licensed teachers from having a weapon in a school, they should not surrender their weapons – as well as their safety and the safety of others – when on school grounds.

If school authorities ban guns, teachers and concerned parents should press for a change in policy.

If teachers cannot or do not want to carry a gun, there is a viable alternative.

While most would agree that even a small, light, and easily concealed handgun is many times more likely to stop an active shooter, a highly irritating chemical able to stop a grizzly, and capable of being sprayed 20 or more feet, is far more effective than attacking an armed shooter with chairs, backpacks, or even computer cables as some have suggested.

Banzhaf, noting that many teachers who might be reluctant to actually carry or use firearms or to employ deadly force, but who nevertheless might want to be able to protect themselves or their charges from a shooter if necessary, suggested that teachers and school administrators be permitted to carry defensive (Mace-like) spray devices, or at least have them available in a classroom.

After all, he argued, some are quite capable of stopping even an enraged grizzly bear, and of being projected more than 20 feet.

He reports that several K-12 schools, colleges, and even religious organizations in Ohio have shown that self defense sprays can be a non-lethal alternative to guns in stopping or even just deterring an active shooter. Many use an especially intense law-enforcement strength of red pepper gel which projects up to 20 feet, and the canister which requires little in the way of aiming ability.

Interestingly, the red gel is designed to coat and cling to gas masks, goggles, or glasses, at least obscuring the vision of shooters who might try to protect themselves from conventional police tear gas, and keeping the strong irritant in very close proximity to their faces.

Since the devices are too big to be carried comfortably on one’s person, schools or even individual teachers can purchase the spray canisters enclosed in a small safe which can be bolted to a wall in a classroom. A teacher can open it easily by pushing a few buttons in the correct sequence; something which can be done even in the dark or if a teacher is temporarily blinded, able to use only one hand, etc.

There’s a third protective measure which many schools have already adopted, some legislatures have mandated, and some PTAs and local civic organizations are now considering sponsoring as part of their public service outreach, says Banzhaf.

In many ways, the best, and also by far the simplest protective step, from the perspective of the many experts noted below, is to be sure that classroom doors can be easily and quickly locked from the inside.

At least one leading state, California, has gone so far as to mandate that all classrooms must have doors which can be locked from the inside, at least regarding future construction. The legislature took their step at the urging of the California Federation of Teachers, California Teachers Association, and California School Employees Association, and with no formal opposition.

The official legislative findings supporting the law said that “the locks in most school classrooms, offices, and other rooms where pupils and staff gather can be locked only from the outside, and the safety of school staff and pupils could be placed in jeopardy if school staff is required to go out into a hallway to lock doors during a violent incident. . . . Locking mechanisms that lock a door from the inside, commonly referred to as classroom security locks, have been developed to quickly lock doors to classrooms, offices, and other rooms from the inside.”

Indeed, while there are several types of locking mechanisms developed especially for schools, the common type of door lock (technically “latch”) found in most hotels and motels – where the guest simply swings a latch horizontally to engage a ball-tipped prong – is as good as any, meets all the requirements of the Americans With Disabilities Act [ADA], and will lock both single- and double-door classrooms securely.

It is also simple enough to be operated even by young children who might find themselves in a classroom without a teacher during an active shooter alert, or by an older child with a physical disability.

Best of all, since such locks are readily available from many sources for under $20 each, the cost to protect a student in a typical classroom of over 20 students is less than $1.

This is far less per student than any other measures, and almost certainly far more effective than relying upon young children with bulletproof backpacks, and perhaps even teachers with guns or chemical sprays, to act appropriately and effectively in a panic situation when an active shooter is detected.

It is obviously also far less expensive, even after allowing for the minimal costs of adding these latches to doors with or without existing locks, than the “active-shooter” insurance policies which schools are now purchasing at costs reportedly starting at about $1,800 for $1 million in coverage.

Given both the very real school-shooting risk and the much higher perceived risk (almost 3/4th of parents worry about a shooting at their own child’s school each and every year), it is not surprising that many concerned about children’s safety are not willing to simply wait for a state or for local school boards, and are pressuring the legislators and boards to mandate locks now, regardless of possible gun control measures which might one day be passed,

Here’s what some experts say.

The Sandy Hook Advisory Commission recommended that “all classrooms in K-12 schools should be equipped with locked doors that can be locked from the inside.”

Likewise, the National Association of State Fire Marshals – which has frequently expressed concerns about children or even teachers not being able to escape in time in the event of a school fire, or of first responders not being able to reach people trapped inside – nevertheless strongly recommends that “to help protect teachers and students in the classroom, the classroom door should be lockable from in the classroom without requiring the door to be opened.”

The GUARDIAN has reported that “once a shooter is in a building, most security experts agree getting into a locked room is one of the most effective deterrents against getting injured or shot.”

Indeed, in no school shooting incident has a locked classroom door been breached, since the gunman doesn’t want to waste time trying to force it open, and shooting a lock off is easier said than done, suggests Banzhaf.

Similarly USA TODAY advised that “security experts say locks go a long way toward keeping out danger. You have to think in terms of we’ve got to have the least amount of tragedy and the most amount of saving, and that may be this key situation, . . . Interior locks may have saved lives during a 2005 school shooting on the Red Lake Indian Reservation in Minnesota.”

Even regarding shooting risks at colleges and universities, INSIDE HIGHER ED quoted the President of Crisis Reality Training as saying that “while it is impossible to eliminate risk entirely, in his experience locks absolutely work. People are able to secure themselves in rooms and shooters haven’t been able to get to them.”

And the magazine CAMPUS SAFETY urged its readers that “it is vital for staff to be able to successfully secure classrooms from the inside to protect students from potential threats.”

So concerned parents should press for locks on all classroom doors before rushing out to buy bulletproof backpacks or hoodies for their children, suggests Banzhaf, who persuaded his own university [George Washington] to install electronic locks, which can be activated from inside in the event of an active shooter on campus, on all classroom doors.