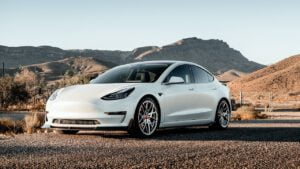 The owner of a Tesla Inc (NASDAQ:TSLA) vehicle suffered a major scare when, on his way to a golf course in Vancouver, Canada, his six-month-old Model Y stalled at an intersection, locked the doors with him inside, and began to smoke. The incident has gone viral on social media.

A scary episode that left no fatalities involving a Tesla car took place in Vancouver, Canada, and was recorded by a passerby at the scene who uploaded it to social media.

In the video, the driver narrates the scene: “I swear to God, suddenly my car turned off. It just said ‘error error error.’ Then all of a sudden the battery started smoking. I got out of my car and called the fire department […]. I’m not kidding.”

The driver was able to break the car window and escape the flames. Normally the doors of the Tesla Model Y open automatically with the push of a button, but in this case, the system allegedly did not work as it should at the time.

The incident is similar to one that happened in July 2021 when a driver was trapped in a Model S Plaid that caught fire. A photo of the incident depicting the car engulfed in flames also became viral, with the driver’s lawyer urging Tesla to launch an investigation.

Tesla incidents have triggered several measures by the leading manufacturer. The brand itself recently called 54,0000 vehicles for review due to a possible failure of the autopilot, which apparently would not correctly interpret the stop signals.

This system in question allows the car to drive itself, albeit with human supervision, to the destination set in its navigation system.

A documentary by The New York Times explores the hurdles that Tesla has faced in its race to develop Level 4 and 5 autonomous driving —fully autonomous— featuring interviews with several workers who assert that Elon Musk’s vision does not correspond with the technical reality.