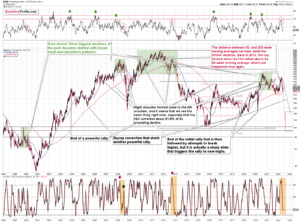 Some analogies in the gold market that may be a hint for investors can be seen right now. If there’s a 2008 rerun, what could that mean in the near term?

The precious metals market declined yesterday, and while the move is still small, it’s nice to see that our short positions in juniors are already profitable.

Something quite interesting happened in their price movement at the beginning of yesterday’s session, and that’s what I’d like to start with today.

Juniors tried to rally above their recent highs and resistance levels, but failed. They formed an hourly reversal candlestick and then declined in the following part of the session.

What was “supposed” to be a breakout turned out to be a fakeout, and lower values followed. This is bearish, and it tells us that taking profits from our previous long positions in the junior miners several days ago was likely a great idea.

To clarify, the above is bearish only for the very short term. It doesn’t tell us much about the bigger picture. So let’s zoom out. Significantly. 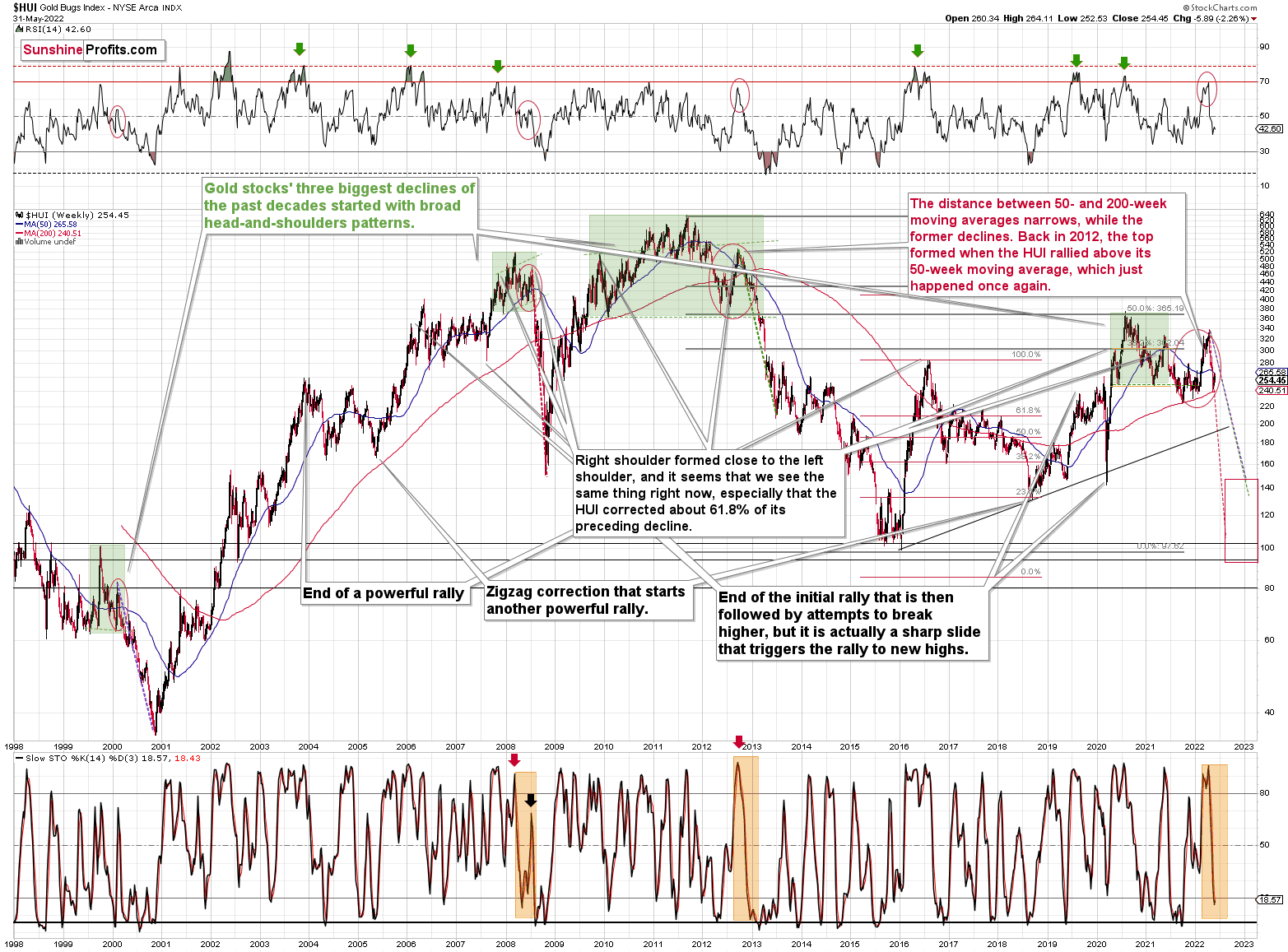 There are quite a few analogies between now and 2012, and I described them in the huge last Friday’s analysis. However, there are also signs that what we’re seeing is actually similar to what happened in 2008. I also described some of them on Friday, but the one that I would like to emphasize today is already visible on the chart above.

Namely, gold stocks declined practically just as rapidly as they did in 2008. Here’s the really interesting part: they corrected after moving close to their 200-week moving average – just like what we saw in 2008. This red line triggered corrections in both cases. They were not huge, but notable from the short-term point of view.

You know how much the HUI Index declined before this correction (between the July 2008 top and the August 2008 bottom)? 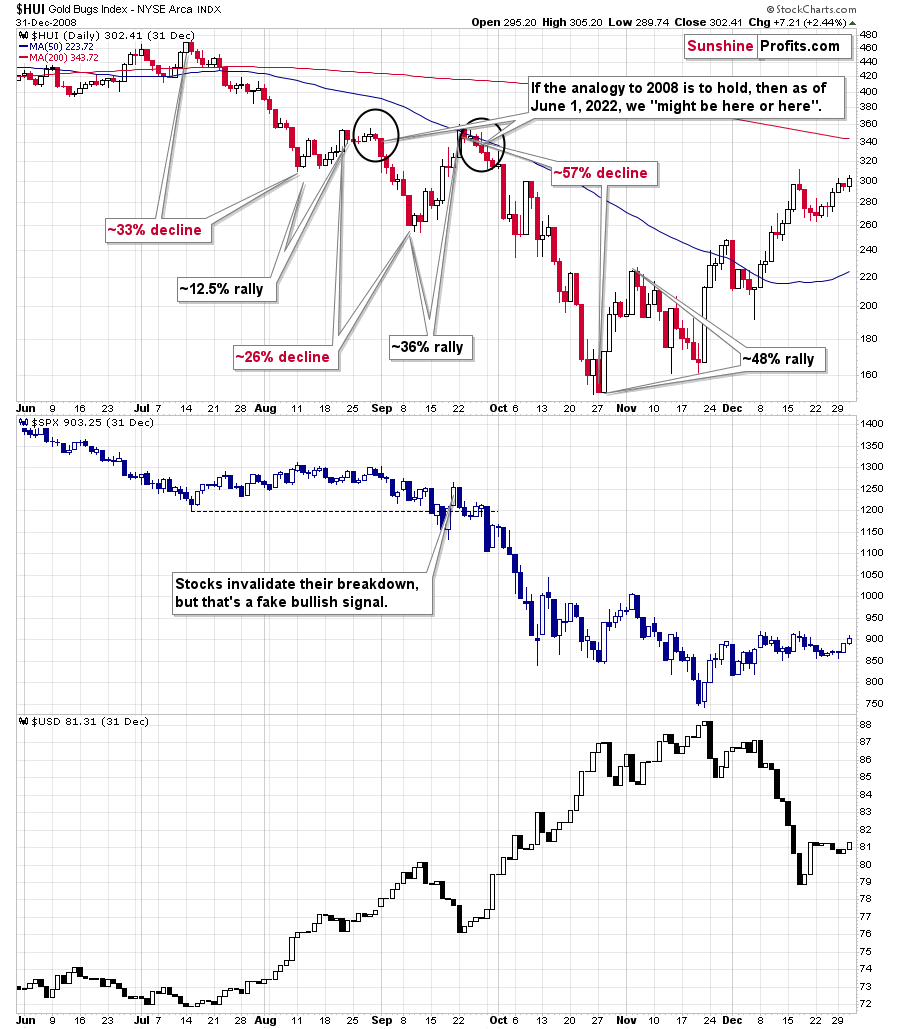 The decline in the HUI Index that we saw between April and May took it about 27% lower.

Not identical, but very similar.

And the recent correction? The HUI moved up around 8% higher in terms of closing prices and about 11% higher. Back in 2008, the analogous rally took the HUI about 12.5% higher.

Once again: not identical, but similar. Things are just a little less extreme this year.

If this similarity is to continue, then we can expect another mover lower to materialize shortly. Well, that’s what we already knew based on other indications, but what the above analogy also tells us is that the HUI Index could decline significantly once again. Back in 2008, it declined by about 26%, which was a little less than before the consolidation.

Please keep in mind that history tends to rhyme, not repeat itself to the letter. So, the above doesn’t imply that the HUI now has to decline by exactly 26%. It does tell us, however, that mining stocks can be expected to decline by as much (approximately!) as they did before correcting, and that’s an important clue. 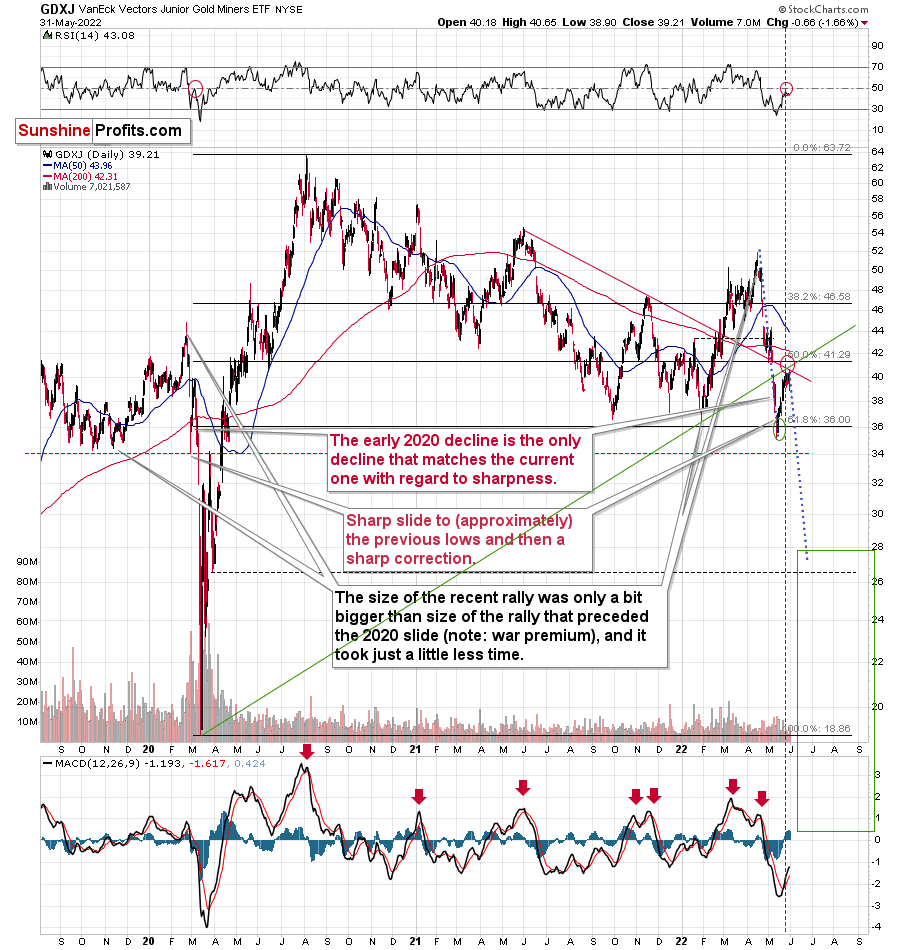 If the GDXJ declines by as much as it did before correcting, it will move slightly below $28. The nearby support is provided by the previous low (dashed line, slightly below $27). While it’s unclear if it moves below $27 or not – before correcting – it’s very likely that we’ll see a huge decline below $30, and that the profits on our short positions are likely to increase significantly.

Is the very short-term top in? That appears likely, though it’s not 100% certain. The GDXJ appears to have topped in the lower part of my target area, and the same goes for the RSI (which might have topped close to 50, just like it did in early 2020). 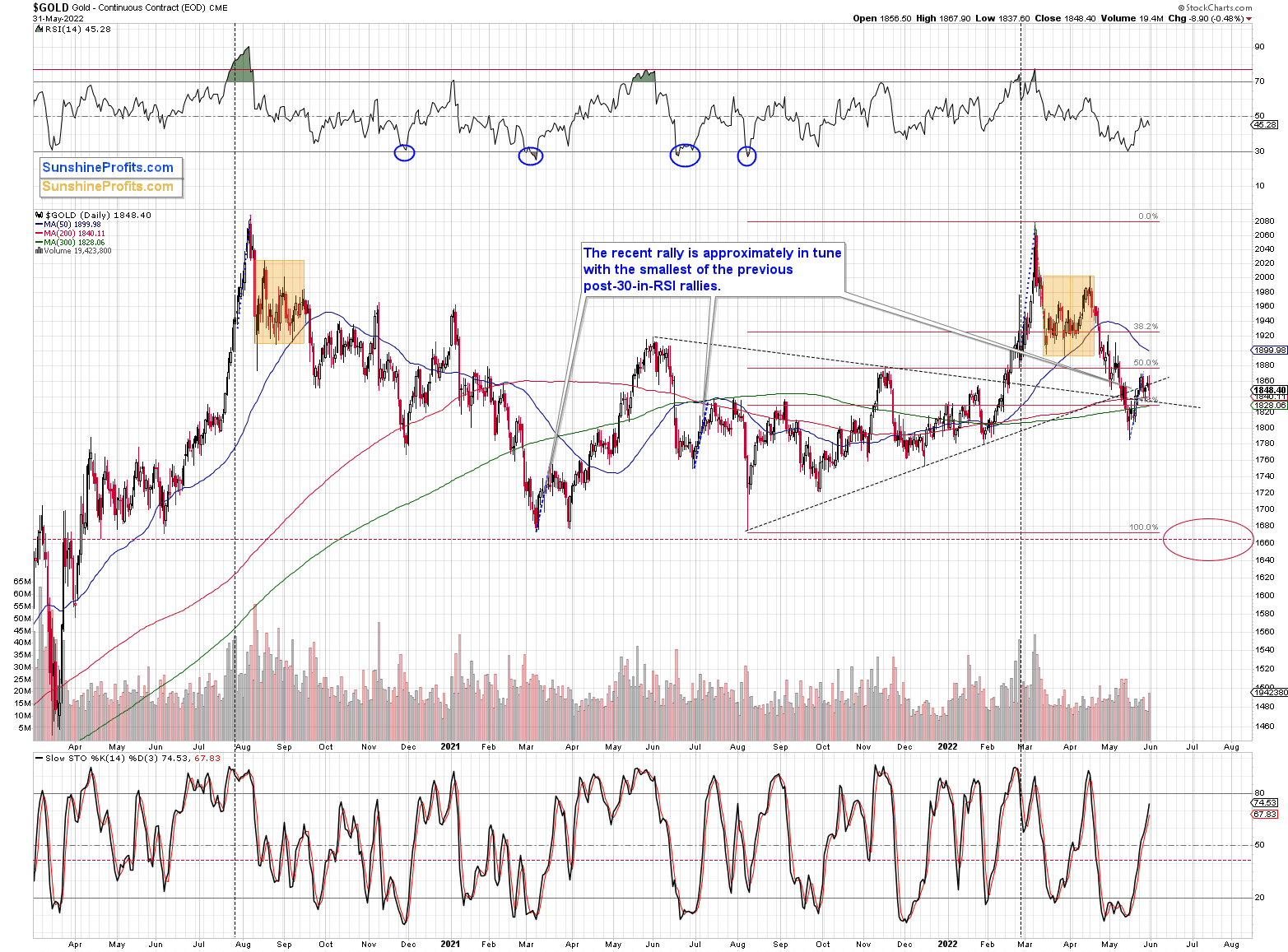 The gold market doesn’t provide any major clues right now, except for the fact that we saw a substantial increase in volume while gold declined. That’s bearish, but not very strongly so. It doesn’t have to be, though, as based on multiple other factors, gold is likely to decline in the medium term and analogies to previous huge declines are only one of them. Rising real interest rates and the USD Index are the two key bearish drivers of gold prices.

Speaking of the USD Index, it seems that it might have just bottomed right in my target area. 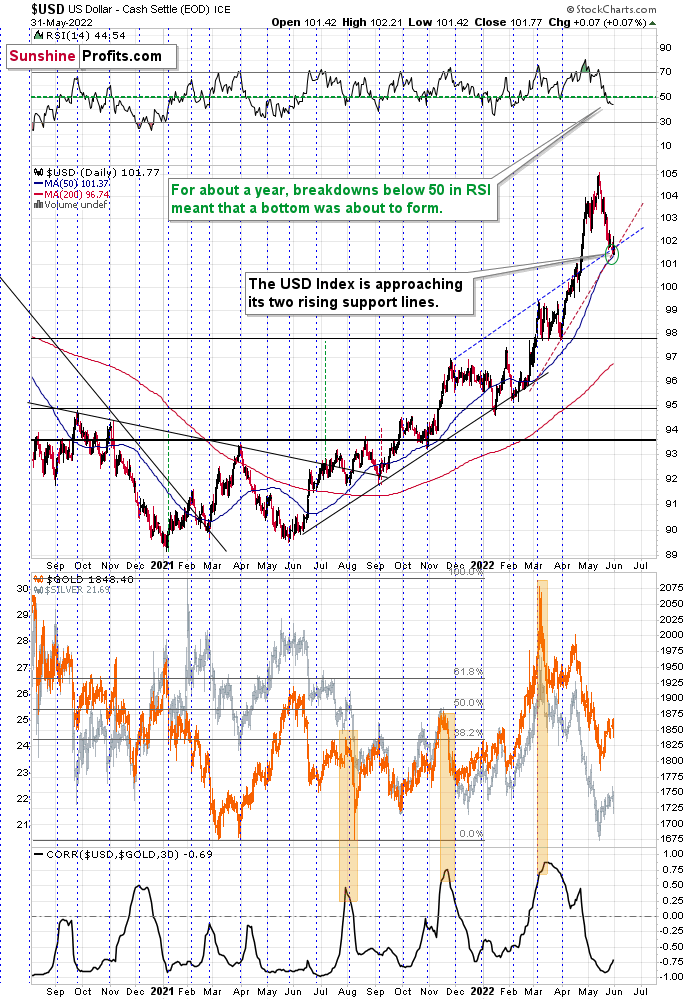 The combination of two rising support lines (and the 50-day moving average) was likely to stop the pullback, and we might have seen exactly that.

Please keep in mind that the RSI below 50 also indicated good buying opportunities for the USD Index during the recent run-up.

Most importantly, though, let’s keep in mind that gold stopped reacting to USDX’s weakness recently as it didn’t move to new highs while the former moved to new short-term lows.

The above is a powerful bearish combination of factors for the precious metals market.

All in all, it seems that we’re about to see another sizable decline in the prices of junior mining stocks, and while I can’t promise any performance, it seems likely to me that profits on our short positions will increase substantially.