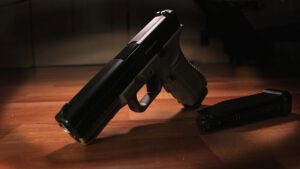 Among the nineteen children who were gunned down in Yvalde last week could have been the children of any American family. And so too could have been all the other victims of mass shootings in other schools throughout our nation in recent years.

Republican Representative Lauren Boebert of Colorado is surely among the dumbest, most ignorant and vile members of the current Congress. She actually insists that it’s OK to bring a loaded gun into the Capitol — and even onto the floor of the House. She very strongly supports our right to bear arms, which she believes is guaranteed by the Second Amendment to the Constitution.

Boebert represents the views of most of her constituents, as well as those of a large segment of American voters. Still, it is truly hard to believe that many of even these “deplorables” would be willing to sacrifice the lives of their own children on the alter of the right to bear arms.

And yet, there appears to be a much kinder and gentler side to Congresswoman Boebert. You can see that in a photo with her four young sons in front of a Christmas tree, which can be easily found on the internet.

But you’ll immediately notice a very jarring detail. Each of the Boeberts is smiling, while cradling a rifle. Merry Christmas! Peace on Earth, good will toward men. A family that prays and shoots together stays together.

Does Boebert actually believe that even the most insane among us should not be barred by background checks from buying lethal firearms, even military assault rifles? What if one of those crazies were to burst into her children’s school? Would she be confident that her children could just shoot him down?

Is our so-called right to bear arms so sacred that to protect it, we are willing to pay any price – even the sacrifice of our children’s lives?

Boebert is hardly the only member of Congress blocking meaningful gun control legislation. Nearly the entire Republican political class – from members of Congress and state legislatures down to county and local officials – apparently believes in blocking gun control at all costs – even at the cost of the lives of our children.