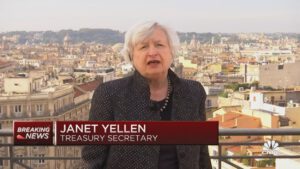 BECKY QUICK: With inflation a top priority at the White House, President Biden meeting with Fed Chair Jay Powell and Treasury Secretary Janet Yellen at the White House yesterday. I spoke with Secretary Yellen after that meeting and started by asking her what took place in that conversation.

SECRETARY JANET YELLEN: The President emphasized his intention to do everything he can to lower the costs that Americans face for important items in their budget. For example, for prescription drugs, for utility bills, things where the President acting on his own or working with Congress can make a difference, and also his support for deficit reduction.

QUICK: I heard the President speaking not long after that and laying out that he is supporting the dual mandate for the Fed. He listed first number one full employment and number two stable prices. I always thought the stable prices was the first mandate and the most important Alan Greenspan used to say if you take care of that everything else follows. Was that intentionally kind of laying out that those two items come with with full employment first?

YELLEN: Well, listen, the Fed has a dual mandate and it is maximum employment and price stability. I think that the way it’s phrased in the law, but we are at full employment. We have a very strong labor market that’s been achieved, but inflation is way too high and it’s really a big burden on American households and so maintaining full employment while bringing inflation down, that’s the President’s priority. And I believe that’s consistent with how the Fed sees it, its its program.

QUICK: Looking around just in terms of deficit spending, and trying to bring that down, there have been these trial balloons floated about student debt forgiveness, and the things that we’ve heard the details that we’ve heard at least at this point suggest that it would be $10,000 forgiven for anybody making up to $300,000 filing jointly. It seems like that’s a pretty regressive situation, a lot of money north of $312 billion it would cost to do this and that would be a lot of money going to people who aren’t necessarily at the lowest end of the spectrum, people who haven’t even gone to college. What are your thoughts about trying to direct funds at this point and trying to make sure we’re being the smartest about helping the people who need it the most?

YELLEN: So this is a matter that no decisions have been made on. There are discussions taking place and of course, the impact on the economy and equity are part of those discussions,

QUICK: Just in terms of what’s been happening with the supply chain, a lot of these issues again, are out of our control or things that will take a very long time to fix. But there is the idea that the longshoreman in California, and the ports there could go on strike at the end of this month. That seems like it would be something that would be a huge additional snarl to what we’ve already seen with the supply chain issues. Is the administration monitoring this? Have they been involved at all in any talks to try and make sure that that does not happen?

YELLEN: Well, that’s something that we’re monitoring and recognizes critical and we certainly hope an agreement will be reached that will keep the ports open and operating. I agree that this is really critically important to making sure our supply chains don’t become more problematic than they are just right now.

QUICK: Defending he Fed’s independence is obviously very important, and that will go a long way towards fighting inflation. But a lot of the other ideas that the President laid out today are things that won’t take place in the near term or even the medium term. You’re talking about much longer investments, things that will take a long time to pay off. Is that almost a tacit admission that this is not going to be a problem that the administration at least can correct very quickly especially with spending programs that would probably be more inflationary?

YELLEN: Well, look, I, you know, we’re still considering a reconciliation package. It could very well have reductions in the cost of prescription drugs. That would make a difference to every family that has drug costs, is part of its household budget, and that could make a difference very quickly. The President has authorized historic releases from the Strategic Petroleum Reserve to try to hold down prices and offset some of the upward pressure that we’ve seen from Russia’s war on Ukraine. So there are things that can be done, and the President is supportive of deficit reduction. We’re actually seeing a huge reduction in the deficit, the deficit as a share of GDP, is projected to fall below the level in 2019 before the pandemic and his budget proposes revenue raisers that I think would lead to a fairer tax system, not burden households, any household making under $400,000 and enable us to achieve deficit reduction that would also help to bring inflation down.

QUICK: When it comes to energy prices, those are obviously a huge issue for Americans right now. The price at the pump and the SPR releases maybe do something temporarily, but the relief that they’ve provided in oil prices seems to have been pretty fleeting. Is there any consideration being done in terms of trying to reverse things from Keystone Pipeline or promote more drilling in certain areas or even just trying to offer incentives to get companies to spend more money, more capital expenditure, oil companies on trying to take more out of the ground quickly?

YELLEN: You know, the oil companies are sitting on lots of leases that they have not drilled and the prices that prevail right now when oil markets provide ample incentive for firms to boost production, the Strategic Petroleum releases are very substantial, and I see is filling in in the market while waiting for oil producers to ramp up production. The Keystone Pipeline would take years to come online and really is about moving oil rather than producing more oil and remember, oil prices are set in global in global markets, not based on domestic production.