What Can We Learn From LUNA’s Collapse? 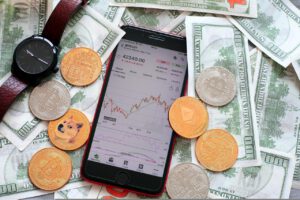 Lehman Brothers’ collapse was the largest corporate bankruptcy in US history, having accrued $619 billion in debt. So large were Lehmnan’s liabilities that it presaged the Great Recession of 2008 – 2009, making it necessary for the Federal Reserve to step in. On the same level of fallout is Terra’s collapse for the crypto space.

On the heels of Ethereum, at a $41 billion market cap in April, Terra (LUNA) was supposed to usher Finance 2.0 by providing a blockchain counterpart to the VISA payment system. Additionally, one of its main dApps, Anchor Protocol, enticed users with up to 19.5% yields on savings accounts.

Unfortunately, Do Kwon’s Terra foundation relied on an algorithmic stablecoin TerraUSD (UST). Without having a real 1:1 cash backing, UST maintained its peg to the dollar by LUNA overcollateralization. When the bearish market devalued LUNA, Terra went into a death spiral, wiping out $44 billion of wealth from May 5th to May 12th.

Just as Lehman Brothers’ collapse brought in the Dodd-Frank Act, lessons from Terra’s collapse will be long-lasting.

How can decentralized finance (DeFi) be truly decentralized by relying on stablecoins run by corporations? For instance, USD Coin (USDC) is run by Circle and Coinbase. Each USDC stablecoin is backed by one dollar, which is regularly audited by an accredited accounting firm.

For this reason, if all USDC were suddenly redeemed, nothing would happen. Meaning, there would be no collapse spiral akin to a bank run. In contrast to these classically backed stablecoins, algorithmic stablecoins are supposed to be self-governed and self-contained within the ecosystem.

This way, they achieve decentralization by not relying on cash reserves. Instead, their peg to the dollar is collateralized by the network’s native token. In fact, due to inherent volatility of low market cap cryptocurrencies, algorithmic stablecoins need to be overcollateralized. Yet, their history is full of bank run failures:

Now that the brutal wipeout of Terra’s UST exposed the vulnerability of algorithmic stablecoins, it is likely that investors will avoid such projects. After all, Do Kwon’s new Terra 2.0 has no stablecoin at all. If anything, due to rampant inflation, we may see the rise of commodity-backed stablecoins, such as gold-backed Pax Gold (PAXG), Tether Gold (XAUT), DigixGlobal (DGX) and others.

This also means that full decentralization will have to take a back seat in favor of financial security.

Many people don’t realize that stablecoins often yield the highest APY rates on more centralized platforms such as BlockFi. Even with the national average interest rate for savings accounts at 0.07%, this is nothing compared to stablecoin yields.

The question then is, why would a dollar-backed stablecoin like USDC yield so much but the dollar itself so little? The simple reason is – higher demand than supply. While there are trillions of dollars, there are only billions of tokenized dollars. And their stability, especially when it is vetted, is a prized commodity.

So far, big market upheavals have slightly destabilized the largest stablecoin by market cap, Tether (USDT) by $0.05 cents. However, USDT swiftly recovered by expanding its reserves.

More importantly, both stablecoin and cryptocurrency yields are market-driven. Their falls and downs depend on market performance. This is another thing that Kwon’s algorithmic UST stablecoin short circuited. Up until the crash, Terra’s Anchor Protocol offered up to 19.5% yield rate for staked UST. The rate was set artificially to rapidly expand growth.

The rapid growth indeed happened, as Terra went from less than 1% DeFi market share in March 2021, to over 13% up until this May. However, because it was based on anti-market behavior it deflated even more rapidly. Case in point, Anchor Protocol was artificially boosted by the Luna Foundation Guard (LFG) in February by $450 million.

That is how Anchor Protocol managed to pay out the high yield, at least initially. It turns out, not only was nothing decentralized, but Terra artificially kept up appearances to widen its pyramid bottom. In the end, wider bearish market winds eroded the bottom despite the boosts.

The lesson? If a single protocol offers double the staking yields than anyone else, something is going on, and it’s likely not an ingenious cutting edge innovation but a pyramid scheme.

Just like Ethereum has its own foundation, so did Terra with its Luna Foundation Guard (LFG). However, it appears that the latter used the veneer of decentralization as a mandate to act in the shadows.

LFG had 80k Bitcoin (~$3.5b) at its disposal to defend the UST peg, yet there is little clarity on whether the money was used for this purpose. Dr. Tom Robinson of Elliptic research showcased there is no way to positively determine if BTC was sold or used to defend UST against de-pegging.

By the same token, Terra validator leaks revealed disturbing behavior on the part of Terraform Labs’ leadership. Terra’s opacity alone goes against the common fiduciary obligation practices. No matter what the ongoing investigation by South Korean authorities reveals, it is clear that DeFi projects need more transparency and scrutiny.

Otherwise, the spirit of decentralization will just be abused as a gimmick.

To protect from bad actors and experiments that are doomed to fail, a balance has to be reached between responsibility and innovation. In the immediate aftermath of Terra’s meltdown, Treasury Secretary Janet Yellen called for additional federal regulation.

Of course, the $40B+ wipeout is peanuts compared to trillions in equities alone, but Yellen still sees a need to preemptively set the rules for digital assets.

“I wouldn’t characterize it at this scale as a real threat to financial stability, but they’re growing very rapidly, and they present the same kind of risks that we have known for centuries in connection with bank runs.”

Most recently, on Tuesday, Sen. Cynthia Lummis (R-WY) and Sen. Kirsten Gillibrand (D-NY) introduced a comprehensive crypto bill dubbed the Responsible Financial Innovation Act. Not only would it classify digital assets as commodities but it would legally define stablecoins as “indebtedness”.

Likewise, stablecoins would be issued by a depository institution that would have to maintain high liquidity to back them up, “not less than 100 percent of the face amount of

the liabilities”. This will go a long way in securing investor confidence. However, one has to keep in mind that CBDCs – central bank digital currencies – may render the entire stablecoin issue a moot point.

Without innovation, we wouldn’t even have conversations about alternative money like Bitcoin, or revolutionary smart contracts that render banking services obsolete. However, by pushing the envelope, we should be careful to not lose the core reason for such innovation to begin with – financial liberation.

If it leads in the opposite direction, we are on the wrong road. Moreover, the algorithmic stablecoin story is not over. Amid Terra’s demise, NEAR Protocol launched its USN. However, with all the lessons behind us, investors should treat such projects as risky experiments.

Want to stay up to date on the world of digital assets? Subscribe to Tokenist’s newsletter, Five Minute Finance. Receive one email, every Friday, with the week’s most important trends in the converging worlds of traditional and digital finance.