Jeffrey Gundlach: The Economy Isn’t As Strong As People Say 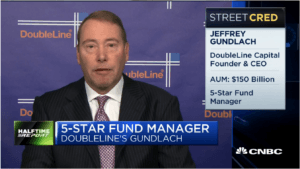 JEFFREY GUNDLACH: So by September, it looks like we’re gonna be at around that range will be 2.50 to 2.75. And I don’t really know what the difference is between raising it to 3 now and raising it in two steps in September. The inflation rate is so high, and this idea that it’s about to come down to anything close to the 2% level is completely out of the cards if you look at the data right now. Our model at DoubleLine is looking for an inflation rate to stay in the eight handle now for a couple more months, maybe even print a little higher based on the fact that commodity prices got even more elevated, particularly energy. And so by year end, we might get inflation down into the high sixes. But when you’re talking about the goal of 2% and repeatedly committing to that as an essential goal, I think he said to even allow for a functioning economy, you need that kind of price stability. We’re so far away. I just don’t see how we’re going to avoid that 3% number happening basically by the September meeting or something very, very close to it. So very much as expected because the Fed told you on Monday what they were going to do.

GUNDLACH: Well, one thing that’s amazing about the credibility issue is the Fed is making these predictions for rates a year from now being at what 3.8 or something like that, and May of next year and that being the high point, that all these inflation predictions for next year and the year after. Where the credibility is really lacking is why are you bothering with all of these predictions for one year and two years from now when you have when you had a complete U-turn on some of the things you said six weeks ago and a complete U-turn on things you said, you know, six months ago, so I just don’t take those credible at all on those predictions.

GUNDLACH: They’re following the bond market. It’s appropriate they do so as many commentators have said today, and I think accurately, it is nice to see that the Fed’s predictions for year end are finally matching what’s going on with the two-year Treasury but they have to execute on it. That’s why I think it’s I just think that they should I think they should paint or get off the ladder basically when it comes to meeting this goal of that 3% type of interest rate. We should get there now.

Gundlach On Bond Market Calming Down

GUNDLACH: I think the bond market has obviously been calmed down at least for now because you know, there’s there’s less uncertainty as we talked about six weeks ago. At least there’s less uncertainty about where we’re going but the Fed heading to 3.4%, my suspicion is that the two-year Treasury is going to start heading higher again because the inflation prints are not going to be pretty. The next two that are coming out will probably be somewhat stable relative to today’s level.

GUNDLACH: They can, they can see what happens they can go to 3.5 or 4 or what they’re predicting 3.8 and just wait and see what happens. But the rest of his messaging is full of flexibility, being nimble, being data dependent. So it looks like they’re trying to get to a place, you know, destination in the next year or two but they’re what they’re looking at is almost day to day and so they’re oversteering I think constantly.

Gundlach On Fed Being Flexible

GUNDLACH: I’m completely in favor of that and here’s how I propose doing it. Put the Fed funds rate to 3% right now and be flexible and if the data really starts to soften, bring it back down. That’s also flexibility. The flexibility we’re doing now is hoping that something good happens, but kind of fearing that that good thing isn’t going to happen so messaging that we’re going to, you know, hope for the best but plan for further increases and that’s called flexibility. I call it hope.

GUNDLACH: I think it’s eye catching frankly or ear catching that everyone keeps talking about how wildly strong this economy is. I mean GDP was negative in the first quarter and GDP now from the Atlanta Fed for the second quarter is now at zero, and has been trending in a southward direction for the last few months. So, where’s the strong economy? I mean retail sales aren’t exactly strong. Personal consumption expenditures, they look strong because there’s inflation in there. You know, housing has become extremely less affordable. The average monthly payment, the monthly payment on a median home, if you just take the median home price and the 30-year commitment rate, that payment is up by 45% year to date. So it’s pretty obvious that these higher mortgage rates which have doubled in just the past several months are going to cut into things.