Putin: The Mask is Off. Europe is Next. 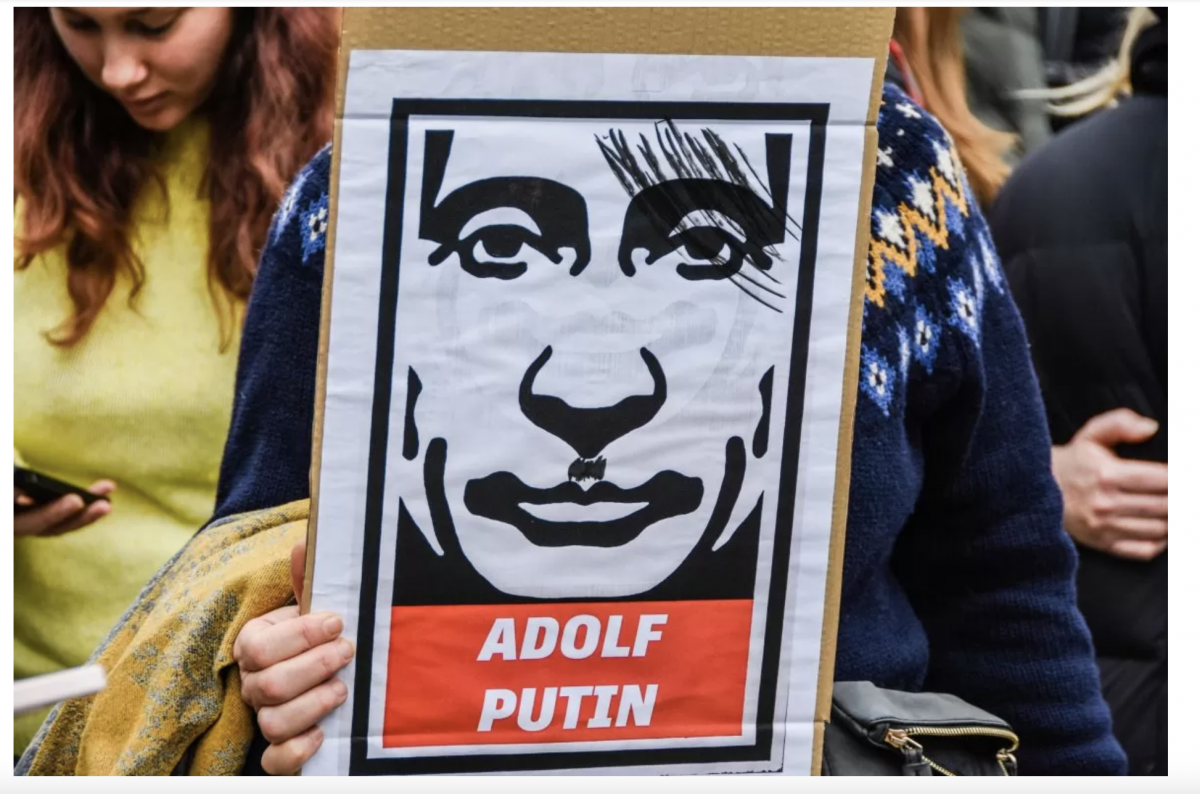 When Putin started the war, he tried to shift the blame to NATO, calling it the instigator. He argued that Russia had no choice but to defensively launch the war to prevent NATO from surrounding Russia from all sides. A few days ago, Putin finally lifted his veil of pretense: this is a war of conquest.

Readers have asked me for my updated thoughts on the war in Ukraine. Here are my somewhat unstructured but definitely very gloomy thoughts. I promise next week’s email will be about a much brighter subject.

I wrote a four-part series on the war in Ukraine. If you missed it, you can read it here.

This war is not about Ukraine

When Putin started the war, he tried to shift the blame to NATO, calling it the instigator. He argued that Russia had no choice but to defensively launch the war to prevent NATO from surrounding Russia from all sides. Reality, of course, was very different. NATO was a sclerotic, toothless, mission-less defense (not offense) alliance in retirement, collecting its “peace dividend” from the breakup of the Soviet Union. Most of its European members maintained their defense spending below NATO charter rules.

Yes, the US, arguably NATO’s most important member, was increasing its defense spending. But Russia was an afterthought in the rationale for this increased spending. Our single focus was on China. Of course, ironically, this offended the sensitive Russian ego. Russians felt that nobody feared and respected them anymore.

Another excuse Putin used to sell the war to Russians was that the mighty Russian army was purifying Ukraine from Nazis and drug addicts. This was a lie. Ukraine has about as many Nazis as any other country in Europe, no more and no less. I wrote a lengthy essay on this topic. And if Putin was really worried about drug addicts, Russia should have invaded San Francisco instead.

A few days ago, Putin finally lifted his veil of pretense. He compared himself to Peter the Great and the war in Ukraine to Russia’s 21-year war with Sweden. He said (I am paraphrasing) that Peter had returned land to and fortified Mother Russia, and he added that now it was his time to do the same. Putin openly wants to be Vlad the Great, and Russia looks at Europe as its oyster.

Most (not all) Russians outsource their thinking to a few TV channels controlled by the government, where they are told what to think by a few propagandists. You may see a parallel between this and some Americans and their favorite TV networks. Take this American image and multiply it by a thousand and you’ll get the level of brainwashing of an average Russian. The message on Russian TV is carefully curated by the Kremlin, and you can, for instance, go to jail for calling this war a war.

Russian propagandists packaged Putin’s empire-building message so that it seemed not to have come from a shirtless KGB thug but to have come down from Mount Sinai. Suddenly, Russians started looking at themselves as the descendants of Genghis Khan, destined to expand Russia’s borders to the old extents of the Tatar-Mongol Empire (basically encompassing all of Europe). The propagandists even started quoting Peter the Great: “We’ll take from Europe everything we need and then turn our bare ass to it,” And they openly used the threat of nuclear weapons, accompanying their threats with, “It is not our fault that you [Europe] are weak and we are strong.”

What in the past was an educated surmise has now become as clear as rain: If not stopped in Ukraine, Putin’s Russia will continue its excursion into the rest of the ex-Soviet republics – defenseless Moldova, Belarus (which is already a Russian vassal state), Kazakhstan, Tajikistan, Kyrgyzstan, and others are next.

After Putin is done Frankensteining the Soviet Union back together with countries that are not part of NATO, he may move on to Baltic countries that are NATO members. I know, that is unimaginable. But so was the invasion of Ukraine and a shirtless thug openly discussing his plans to return land to and fortify Stepmother Russia by invading other countries and carelessly threatening the use of nuclear weapons.

This war is not about Eastern Ukraine or even Ukraine. It is about stopping Hitler in 1939 after he had already invaded Poland but before he marched on the rest of Europe.

As Gary Kasparov says, Russia under Putin has turned into a mob state. Mobsters respect strength and feast on weakness. I truly hope that as we start feeling the effects of the war on our wallets and war coverage gradually slips from primetime news to once a week updates, our resolve in supporting Ukraine doesn’t wane. Let’s be honest; Ukrainians are losing their lives on our behalf. If we don’t support them with weapons now, it will be our soldiers fighting the Russian Army in Estonia or Poland in a few years on behalf of NATO.

Ukrainians are fighting for their freedom

It is easy for some people to just look at a map, redraw a couple lines, and say that what used to belong to Ukraine now goes to Russia. That is what French President Macron told President Zelensky: that the West needs to let Putin be spared humiliation and that Ukraine should consider ceding some territory to Russia. This makes my blood boil; it is like asking a rape victim to leave a good review for their rapist on Yelp. Putin completely controls what the Russian people see and what they think. He can create his version of reality, divorced from facts and truth. He does so daily.

Thanks to Putin’s propaganda machine, the majority of Russians believe that Ukraine is on the brink of becoming Nazi Germany. I was talking to my brainwashed middle school Russian classmate, and he was telling me, “Did you see the swastikas tattooed on the Azov fighters who surrendered [after holding out for two months] in Mariupol?” I had not. He continued, “When they surrendered, some of them were shirtless, and you could clearly see that they were Nazis.”

I told him that he and his countrymen should look in the mirror.

I’m as reviled by Nazi symbols and beliefs as much as any Jew that had relatives murdered in the Holocaust, but being a Nazi is a lot more than just having a swastika tattooed on your body. It is about what you do and how you act. I paraphrased Forrest Gump: “A Nazi is what a Nazi does”.  These Azov fighters, depite a tiny minority in their ranks that actually have swastika tattoos, were fighting for the independence of their country against a foe that proclaims it hates Nazis but is in fact a modern Nazi regime.

(I realize that this topic contains an incredible amount of complexity and nuance; to understand it, please read my essay on Nazis in Ukraine).

When we see the Nazi symbol we immediately stop thinking. Our emotions overwhelm us, and with good reason. But let’s think about it calmly – what is Nazism today?

It is the most recent, extreme version of nationalism, where one race or country believes it is superior to others and is willing to do any amount of killing to enforce its dominance.

It pains me to say this, but Russia today is sick with its own sort of Nazism. Just as Nazis believed they were the superior race, Russia believes it is superior to Ukraine and other nations. Russia wants to delete the Ukrainian identity, as though the country has no right to exist.

This article (you can use Google Translate to read it) is the Russian version of Mein Kampf. It was published by the Russian Information Agency, a state-owned domestic news agency – an information arm of the Kremlin.

Ukraine, as history has shown, is impossible as a nation state, and attempts to “build” one naturally lead to Nazism. Ukrainism is an artificial anti-Russian construction that does not have its own civilizational content, a subordinate element of an alien and alien civilization.… Further denazification of this mass of the population consists in re-education, which is achieved by ideological repression (suppression) of Nazi attitudes and strict censorship: not only in the political sphere, but also necessarily in the sphere of culture and education.

Denazification will inevitably also be a de-Ukrainization – a rejection of the large-scale artificial inflation of the ethnic component of self-identification of the population of the territories of historical Little Russia and New Russia, begun by the Soviet authorities.

As Russia captures Ukrainian cities, it immediately starts “de-nazifying” and “Russifying” them. It prevents people from traveling elsewhere in Ukraine and allows them to travel only to Russia (think: the Wall in East/West Germany). It switches the functional currency to the ruble. It starts rewriting history by canceling the Ukrainian curriculum in schools. It wants Ukrainians to forget their culture and their language. Just like a rapist asking his victim to love him, Putin wants to force Ukrainians to fall in love with their new Russian nation.

My advice to Mr. Macron: If you want to save Putin from humiliation, I have heard that Burgundy is nice in August. Though Russians prefer potato vodka to French wine, they’ll adapt, and you can benefit from learning to say “I surrender” in Russian.

On a cheerier note, Ukrainians have chosen the design for a new stamp. It is called “Good evening, we are from Ukraine.” 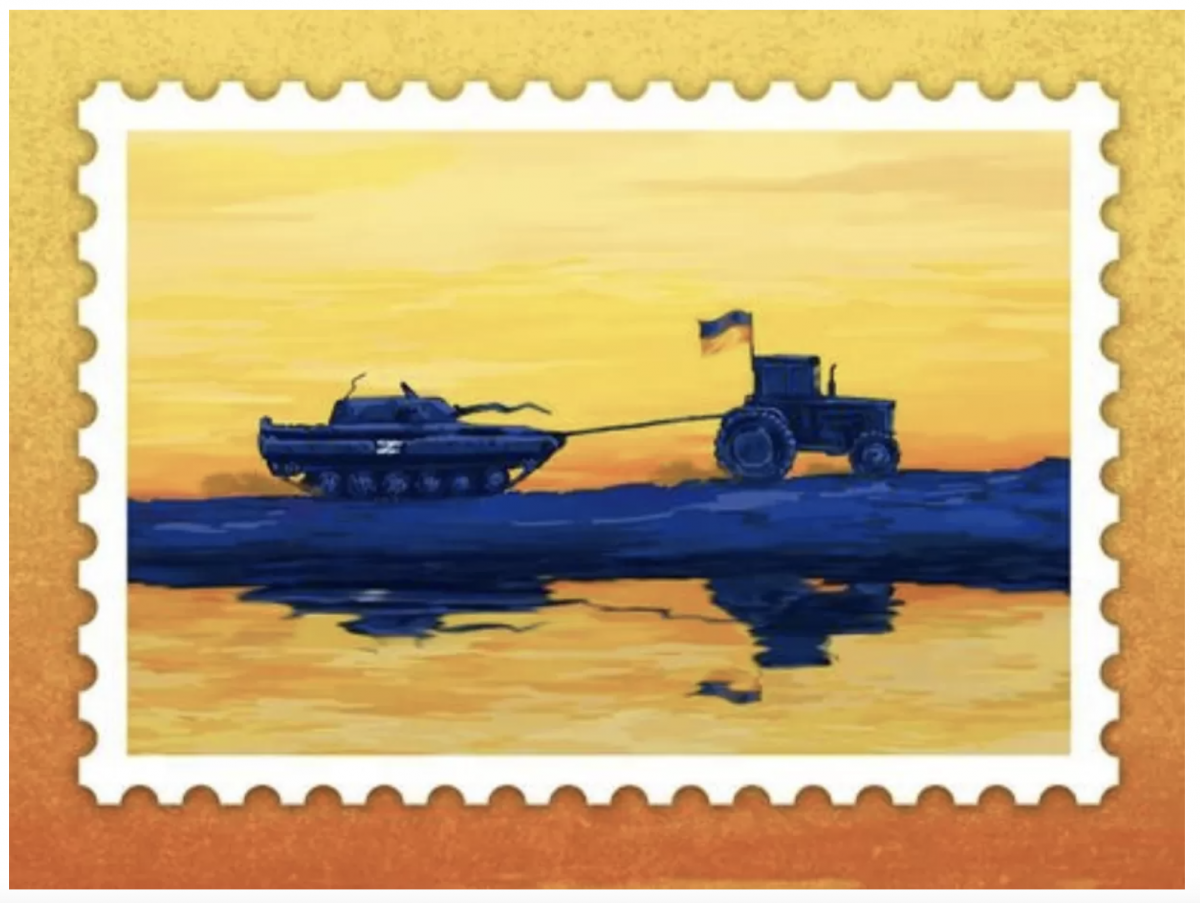