Despite Crypto Crash, These Companies Are Filling Hundreds Of Crypto Jobs This Week 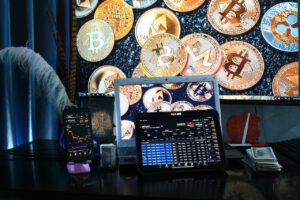 This week as the price of Bitcoin tumbled, Coinbase has reportedly fired almost one-fifth of its employee base, citing the economy, market conditions, and over-hiring as the main reasons.

Despite the turbulence in the crypto market, companies of all sizes are still betting on the capabilities of blockchain technology to be part of their future, and are posting blockchain and crypto job vacancies every day.

Cryptojobslist.com has scoured jobs board Indeed to identify which companies have actively posted crypto jobs and which states have the greatest number of open job roles in the last seven days.

The study reveals multinational professional services giant Deloitte has the highest number of open positions in cryptocurrency, with 144 crypto-related vacancies being advertised in the last seven days. All positions are location-based across 36 states with the highest number of available roles in Florida (17), California (15) and Pennsylvania (11).

Over the past week, Deloitte’s vacancies make up just over one quarter (25.3%) of all crypto-related job listings on Indeed.

Ex-Twitter CEO Jack Dorsey’s Block (formerly Square) and Cash App have the second and third highest number of available positions, with advertisements for 59 available roles at Block and 24 in Cash App over the last seven days. Most roles at Block are advertised as based in California (34) or remote (31), with some positions available in Texas (6), Utah (3), Georgia (3), Arizona (2), Illinois (2) and New York (2).

Cash App is hiring the highest number of remote working roles out of any company in the study, with 23 positions advertised as remote-working this week.

In the last seven days, there have been new job adverts posted in almost every state, with the exception of Delaware, Kentucky, Maine, Mississippi, Oklahoma and West Virginia.

Advertisements for crypto-related jobs in the United States have been posted in the last seven days from companies including TIDAL, Meta, Bitcoin, Bloomberg, Fidelity Investments and Bank of America, with estimated salaries ranging from $46,900 to $218,000.

Remote working is the most commonly advertised out of any location, with 127 remote positions posted this week, making up just under one quarter of all recent crypto-related job vacancies (22.31%). Second, third and fourth most commonly advertised job vacancies are based in California, New York and Florida with 98, 61 and 31 crypto job advertisements posted in the last week, respectively.

Commenting on the figures, a spokesperson from Cryptojobslist.com said: “The recent crypto crash has not deterred some of the largest companies in the world from seeking to hire new talent for crypto-related jobs. With Deloitte advertising to fill 144 positions in the last week shows that prolific companies are seeing the long-term value of cryptocurrency and making steps to adopt blockchain technologies as part of their overall business strategy. Despite market turmoil, crypto giants like Binance have announced they are hiring for 2,000 open positions, and we will continue to see the industry grow as a result.”