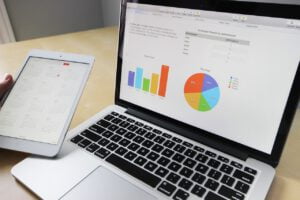 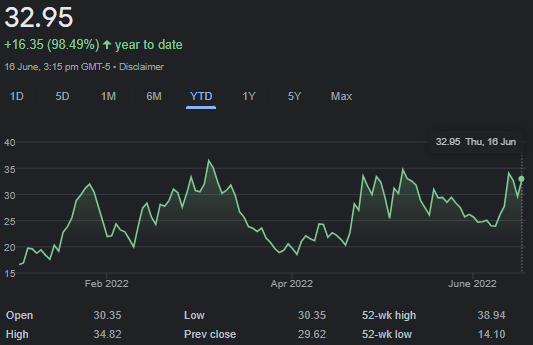 The CBOE volatility index, commonly known as the “VIX,” is a key measurement of expected future volatility based on S&P 500 index options. With medium term uncertainty at unprecedented levels and central banks starting to hike rates at excessive paces, it is more important now than ever for investors to look rebalance portfolios and find investments that can outperform bearish market movements.

The Jefferies report noted that with valuations depressed and fundamentals holding resilience, they believe the best ways are to invest in companies experiencing positive earnings revisions with compressed valuation.

In the second half of 2022, the firm expects that some headwinds, such as inflated freight costs, should begin to subside but will likely be offset by markdowns in sales by companies.

When challenges arise, opportunities may present themselves in other areas

Although, companies with the highest earnings revisions have been Fitness related stocks whose forward estimates have risen over 25% higher since March. The three fitness names included in the key picks have robust growth pipelines and have successfully driven continued membership growth.

Callaway is an American global sports equipment manufacturer and retailer of golf equipment, clothing and accessories. ELY’s share price has sunk 47% after hitting a ten-year high of $37.75 in June 2021. ELY trades on a 28.5x price to earnings ratio, with expectations that the company will grow total sales by ~27% and profit (EBITDA) by ~22% in FY22.

Following the most recent result, management announced a new $100 million share buyback that can be utilized at any time by the board. This allows management to create EPS accretion for shareholders by taking advantage of the depressed share price.

Jefferies noted how Callaway continues to generate growth across its various businesses, which have benefited from sector tail winds in the Golfing industry. Jefferies attributes a $55 target on the stock.

Fintel data analyzing the options market for the stock suggests there is bullish sentiment for the stock. From March to June, the put/call ratio (calculated by dividing all put options by call options) has drifted lower, currently at 0.61.

ELY has a consensus ‘buy’ rating and a $35 target price, implying a 77% capital upside. The consensus target has retreated from highs above $40 in November 2021 but remains significantly above the share price, with a larger deviation in 2022.

European Wax Center is a major chain of hair removal salons that also offers waxing services and sells products for skin care, body, and eyebrow categories. EWCZ was initially listed on the Nasdaq in August 2021 with an IPO price of $17. Since listing, the company has traded with a wide share price range, gaining as much as 80% before erasing most gains but remaining 25% above the listing price.

For the remainder of 2022, EWCZ expects to open 70-72 new stores and guided system wide sales of $875-915 million. The company is experiencing hypergrowth as it continues to roll out new centers, which somewhat justifies the forecast 54x FY22 end price to earnings ratio.

EWCZ has a consensus ‘overweight’ rating and a $35.50 target price, implying a 66% capital upside.

F45 Training is an Australian franchise and fitness center operator that focuses on 45 minute group classes and is headquartered in Austin, Texas. The company has over 1,750 studios across 45 countries around the world. The company is trading on an FY22 forward price to earnings multiple of 7x and expects to double revenue over 2022.

The firm booked $2.5 million in net profit after tax in the previous quarter. On the same day, F45 announced they had obtained $150 million in the form of a financing facility to accelerate the expansion of the franchise in the US. The facility will be funded with debt financing, potentially increasing the facility to $300 million over time. Current franchisees and new prospects can apply for loan financing under the program to develop additional F45 studios from the current quarter.

The Fintel platform gives FXLV an officer accumulation score of 81.28 based on an above-average share accumulation from insiders of the stock.

Jefferies attributes a bullish target of $25 for the stock.

FXLV has a consensus ‘overweight’ rating and a $14.22 target price, implying a 230% capital upside.

Planet Fitness is a North American operator of fitness centers with over 2,000 locations. PLNT has been a strong performing stock over a ten year time horizon with a share price that has traded broadly sideways for the last ~ three years. The company trades on a current price to earnings ratio of 96x but is forecast to fall to 39.9x at the end of 2022 and 29x at the end of 2023.

PLNT is widely held by Fintel’s retail investor base and rose seven spots in popularity this week to become the 29th most controlled security for those who have linked their portfolio to the platform.

Jefferies likes the company’s high profit and capital-light business model that generates strong cash flows. Following the Q1 result in May, the firm highlighted that member numbers grew to 16.2 million, reaching a new all time peak for the company. They remain positive on the stock with a target of $115.

PLNT has a consensus ‘overweight’ rating and a $90.87 target price, implying a 48% capital upside.

Xponential Fitness is a global franchise group of boutique fitness brands across the globe. XPOF was listed on the NYSE at $12 per share in late July 2021. The stock was extremely popular, rising over 100% in its first year of trading. XPOF has been unable to withstand the growth company derating this year and is trading on a ~41x forward FY22 price to earnings ratio.

Jefferies remains optimistic about Xponential’s competitive position and an industry background where consumers prioritize health and wellness. The firm gives the stock a $30 target.

XPOF has a consensus ‘buy’ rating and a $28 target price, implying a 112% capital upside.