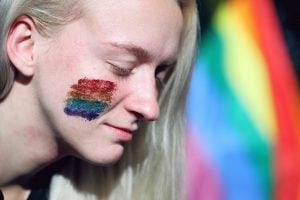 WASHINGTON, D.C. (June 20, 2022) – Even transgender advocates who are doctors and/or transgender themselves are voicing concerns that many parents are making irreversible sex-change decisions for their children much too early without the necessary mental and other workups, and that a growing number of now grown-up children regret decisions based upon mistaken or misunderstood impulses.

Now that problem is likely to become far worse because of a new ruling by the world swimming’s governing body, FINA – especially if followed by other athletic organizations – that M2F transgender children can compete in swimming events as females only if they transitioned before the age of 12. The reason, says FINA, is that “if you transition after the start of puberty, you have an advantage, which is unfair.”

This new early-decision rule is likely to encourage young boys who are good swimmers and have any questions about their sexual identity (and in some cases even their sexual preferences) to make a hurried decision, before puberty, to begin transitioning if they want to compete as females.

On the other hand, such a rule might be necessary to prevent M2F females who went through puberty as testosterone-saturated males – with the associated increases in strength and other athletic capabilities – from putting athletes who were born female at a major disadvantage in swimming and other sporting events, suggests public interest law professor John Banzhaf.

The New York Post just reported, in an article entitled “‘I Literally Lost Organs:’ Why Detransitioned Teens Regret Changing Genders,” about a girl who made an irreversible decision to become male because she “didn’t have a lot of friends on my own,” and “I saw how trans people online got an overwhelming amount of support and . praise.”

She is described as “one of a growing cohort called “detransitioners” — those who seek to reverse a gender transition, often after realizing they actually do identify with their biological sex. Tragically, many will struggle for the rest of their lives with the irreversible medical consequences of a decision they made as minors.”

Another detransitioner with few friends blames Tumbler from making her decision to change her gender, saying: “I was going through a period where I was just really isolated at school, so I turned to the Internet, , , , My dysphoria was definitely triggered by this online community. I never thought about my gender or had a problem with being a girl before going on Tumblr.”

Experts worry that many young people seeking to transition are doing so without a proper mental-health evaluation.

The Rise Of Detransitioners

For example, one expert in the field who is herself transgender, and supports transitioning in appropriate situations where the underlying identity determination has been fully explored and documented, reports that: “she’s worried that some young people are being medicalized without the proper restraint or oversight. . . I’m concerned that the rise of detransitioners is reflective of some young people who have progressed through their gender journey very, very quickly.”

She worries that some doctors may be defaulting to medicalization as a remedy for other personal or mental-health factors. “When other issues important to a child are not fully addressed [before transition], then medical professionals are failing children.”

Now, especially if FINA’s requirements are adopted in the many other sports, children and their parents may be rushed even further and faster if they have any hopes of participating in competitive sports. Experts suggest that it’s often difficult enough to determine if a person is truly transgender – or is pressured to believe so by other considerations – when the decision is made even as a young adult.

Forcing parents and their children to make an irreversible decision – one which could even result in the loss of organs – before 12 is very likely to result in even more unnecessarily rushed decisions, and especially to many which later prove to be incorrect, suggests the law professor, who has won over 100 cases of discrimination against females.

The Post article reports that “in recent years, the number of children experiencing gender dysphoria in the West has skyrocketed . . . the number of young people identifying as transgender in the US has almost doubled since 2017.”

Dr. Lisa Littman, a former professor of Behavioral and Social Sciences at Brown University, says that, of those detransitioners surveyed, “40% said their gender dysphoria was caused by a mental-health condition, and 62% felt medical professionals did not investigate whether trauma was a factor in their transition decisions.”