Russia’s Default Is A Reality As Grace Month Is Over 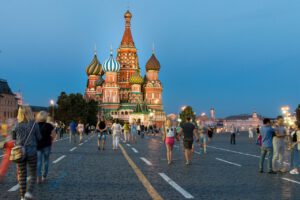 Russia’s default has finally arrived on its sovereign debt in foreign currency for the first time in more than a century. Moscow has been unable to pay the interest on two bonds in dollars despite having enough foreign exchange reserves to do so. Investors assure that they have not received payment after the grace month.

Russia is showing the consequences of the sanctions the West has massively imposed on it after the war against Ukraine.

For months, the country has managed to find ways and shortcuts to wade through the measures that tried to isolate the government of Vladimir Putin and make the country fall into technical default. In the end, the West has achieved its goal, albeit somewhat later than expected.

Although Russia had the capacity to meet this payment, leading economic indicators —the composite PMI sank in March and remain below 50, indicating that the economy is contracting— reveal that the country is facing one of the major economic crises of recent decades.

With double-digit inflation and several leading companies on the way out, Russia will face a deep recession and perhaps years of economic stagnation.

The one-month grace period expired on Sunday on around $100 million of trapped interest payments due May 27, a deadline that is considered an event of default if not paid in the correct currency, according to Bloomberg.

Russia’s default is also backed by other data. The International Monetary Fund (IMF) reveals that the Russian Government had a debt of around $40 billion in hard currency at the end of 2021 —a relatively small amount.

Although the total foreign debt exceeds $470 billion, only part of that amount is in foreign currency and a smaller part is still a liability to the Russian Government.

This is a clear symptom of the rapid transformation that the country is facing, both financially and economically. Russia will have to go on without the foreign capital flows that have historically helped finance investments in emerging countries.

The nation’s Eurobonds have been trading on the secondary market at very low levels since early March, while the central bank’s foreign exchange reserves remain frozen. Russia’s largest banks are cut off from the global financial system, leaving the country in isolation.